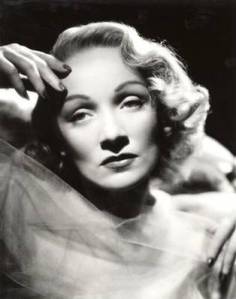 It was on this date in 1992 that the magnificent Marlene Dietrich died, in her sleep, in her Paris apartment at age of 91. She had hidden her face from the world since she had stopped performing over a decade before, saying that the public should remember her as she had been. Sadly, Dietrich is one of those former icons of Hollywood whom the public is slowly failing to remember anything about at all; most are more familiar with Madeleine Kahn’s send-up of her in the Western spoof “Blazing Saddles” than they are with Marlene herself. That is wrong, for she deserves better. Not only was Marlene Dietrich a unique performer and important cultural figure, she was also an Ethics Hero.

She was a rising German stage and screen actress when director Josef von Sternberg cast her as Lola-Lola, the beautiful, cynical leading character in “Der blaue Engel,” (The Blue Angel), Germany’s first talking film. The movie made Dietrich a star. Von Sternberg took her with him when Hollywood beckoned and signed her with Paramount Pictures. There Dietrich built her image and legend by perfecting her femme fatale film persona in a series of classic films directed by her mentor: “Morocco” (1930), “Dishonored” (1931), “Shanghai Express” (1932), “Blonde Venus” (1932), “The Scarlet Empress” (1934), and “The Devil Is a Woman” (1935).

Meanwhile, she had already begun fighting Hitler’s regime. When the Nazis began persecuting Jews, she financed the escape of many Jewish friends from Germany. In 1937, Hitler, through emissaries, offered Dietrich wealth, privileged status and artistic freedom if she would return to Germany and make films there. She refused, and announced to journalists, “Hitler is an idiot.” In return, the Nazis revoked her citizenship, declared her a traitor and banned her films.

Dietrich became an American citizen in 1939. She also became a vigorous and vocal opponent of Nazi Germany, and an especially credible one because of her German heritage. When the United States entered World War II,  Dietrich emerged as an acting, singing symbol of free Germany. The Allies asked her to make anti-Nazi radio broadcasts in German and she eagerly agreed, singing popular American songs and sending propaganda messages over the airwaves from London to Germany, where she was still popular. The Germans turned off most Allied broadcasts, but many couldn’t resist their Marlene, and stayed tuned to hear the star sing “Lili Marlene” and “Falling in Love Again.” (Mel Brooks gives a sly salute to Dietrich’s propaganda efforts in “Blazing Saddles,” showing the Dietrich-like “Lilli Von Schtupp” helping the oppressed western town of Rock Ridge defeat the evil allies of “Hedley Lamar” as she takes the Nazi soldier contingent of Lamar’s army out of the decisive battle by distracting them with popular songs.)

Dietrich was active in war-bond drives and singing in French, German and English, she entertained an estimated half-million Allied troops and war prisoners across North Africa and Western Europe. A lover of camping (apparently the spark for an unlikely affair with John Wayne–they also played chess together and discussed literature) she distinguished herself by gamely roughing it with the soldiers, waiting in food lines, washing with snow, and sleeping on the ground, in the rain, within ruins, and dangerously close to the battle front.

Her tireless wartime exploits were widely recognized and respected. After the war, the United States Government awarded Marlene its highest civilian honor, the Medal of Freedom, France named her a Chevalier of the Legion of Honor, and Belgium dubbed her a Knight of the Order of Leopold.

In her later years, Marlene Dietrich toured the world as a concert singer, her stage appearance almost indistinguishable from the way she looked as a screen siren in the 30’s and 40’s. She sang the famous songs from her movies in whatever language the audience understood, her performances always soaked through with memories and passion.

I was fortunate enough to see one of her very last concerts, and surprised that her final number was not one of her signature songs, but the Pete Seeger classic, “Where Have all the Flowers Gone.” Yet as she sang it, motionless, the lyrics took on somberness and power that they had never had for me before. Here was a woman whose beloved homeland she had left and seen scarred and demolished because of war, and whose life had been profoundly changed by human suffering that, as a performer, she had tried to soothe, expressing anger and sadness that nothing could stop the cycle of death.  I have never heard the song the same way since. You can see a video of her singing it here.

Marlene Dietrich had the misfortune of never making a color film that became an enduring classic, though many of her black-and-white movies—“The Blue Angel,” “Destry Rides Again,” “Witness for the Prosecution, ” and “Touch of Evil” deserve that status. As a result, younger generations neither know her film work nor understand the appeal of her singing, which was as eccentric as it was powerful. (Ernest Hemingway once said that “If she had nothing more than her voice, she could break your heart with it.”)

That is their loss. She was a figure of historical and social importance (Marlene Dietrich managed to be sexy and androgynous at the same time, and was a true proto-feminist) as well as a great talent. It is unlikely that we will ever see anyone like her again. She was also a woman of courage and conviction, and an Ethics Hero.