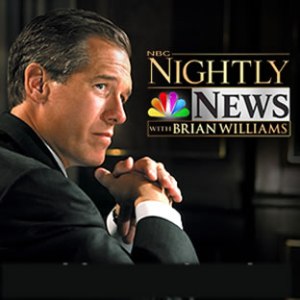 The flap over NBC’s unilateral decision to excise “God” from the Pledge of Allegiance (currently the catalyst for a somewhat off-topic debate in the comments to the Ethics Alarms post on the issue about the propriety of having God in the Pledge at all) points to the related problem of NBC’s gradual but persistent degradation on its news reporting and journalistic integrity over the last several years.  Happily, there is a blog devoted to just that, one of the many excellent ethics-related sites linked on the blogroll that nobody seems to use. It is called Nightly-Daily, where a fanatic Brian Williams foe named Norman Charles meticulously dissects NBC’s nightly news broadcasts to report on journalistic outrages. He finds them almost every night.

“Once again, there was no Nightly News on Saturday or Sunday because obviously, golf was far more important (translation: more profitable) to the geniuses at NBC. Their commitment to news is so tenuous, I wonder why they bother to air Nightly News at all. It seems like only a matter of time before they scrap their news broadcast entirely in favor of something more profitable.”

I think he’s correct. Bringing news to viewers was once regarded as a broadcast duty; now, at least at NBC, it is something less—a tradition, perhaps? A diversion?—and thus neither held to high standards or regarded as important. A golf tournament is not a justifiable reason to pre-empt news that is important to all Americans, not just golf fans.

Not that NBC takes its news duties appropriately seriously when it does have a broadcast. More from Nightly-Daily:

“Sunday 6/12–The lead story on Anthony Weiner was reported by Luke Russert. That’s pretty funny because Russert does not have even the tiniest bit of ability as an investigator or reporter. Obviously, he got his job because Brian Williams created it and handed it to him on a silver platter. How absurd is it for NBC to give a prized on-air job to a 23-year-old kid with no broadcast journalism experience? Most people toil for years in obscurity before getting on the air. Not Luke Russert. He gets fast-tracked. What are the chances that Russert would have gotten that job if his name was Luke Smith or Luke Jones? “

This is also correct. Luke Russert is the son of Tim Russert, the respected host of “Meet the Press” who died in 2008, and his position as a national correspondent is pure, unadulterated, shameless nepotism. The message this conveys is that NBC cares more about giving the son of its deceased employee a job than it cares about finding the best qualified reporters.

Then there is the matter of news selection and the distribution of the scarce time available to give the public the essential information citizens of a democracy require. Norman Charles has chronicled how anchor Brian Williams, rather than following ethical standards of objectivity and fairness, inflicts his own personal preferences on his audience. Charles’ most recent example:

On Sunday, The CBS Evening News spent 30 seconds reporting the death of Clarence Clemons. That seems about right…But on Monday’s Nightly News, Brian Williams spent an astounding three-and-a-half minutes eulogizing Clemons. It is appalling (not to mention unprofessional) that the Nightly News producers allow story lengths to be assigned based not on a subject’s actual importance, but rather based on the subject’s importance to Brian Williams. Nightly News viewers are well aware that Brian has still not outgrown his childish obsession with all things Springsteen. Brian frequently shoehorns Springsteen into news stories. No matter how slim (or non-existent) the connection, he uses any excuse to put Springsteen on his broadcast (he once forced 30 seconds of non sequitur Springsteen footage into a story about John Lennon). Monday’s overlong Clemons obituary was, of course, just another opportunity for Brian to pack his broadcast with Springsteen songs and images. And (once again) to turn a news story into a story about himself. “Yesterday I found myself with a lot of other people from the Jersey Shore–we were drawn to the Stone Pony in Asbury Park…like everybody else there, I took pictures….” As usual, it’s all about Brian, all the time.“

The cumulative impression of Charles’ observations is that fair, competent and professional broadcast journalism is all but dead on NBC, where it once flourished in the days of Huntley and Brinkley and Tom Brokaw. At one time I thought that polls showing that viewers under 30 got most of their news from “The Daily Show” constituted proof that the members of our youngest generation was shallow and naive. Now I think that they may just be practical. If the news is going to be covered in a random, distorted, unprofessional manner anyway, the package might as well be funny.

5 thoughts on “NBC and the Death of Professional Broadcast News”