Ah, how many of you must identify with Kobe Bryant today! 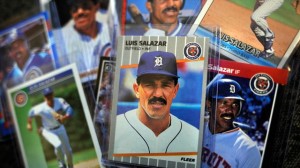 Did Mom throw them out?

He is enmeshed in an ugly family dispute, suing his own mother in response to an unethical wound that mothers have casually inflicted on their children for centuries.

The superstar Los Angeles Lakers guard’s lawyers argued in a court filing that Bryant never gave his mother permission to sell his memorabilia from his high school days and early professional basketball career, in an attempt to block the auctioning off of jerseys, balls, trophies, championship rings and more for his mother’s profit. His mother, Pamela Bryant, says that she has the right to sell the stuff, because the NBA star told her the memorabilia was hers. She has already received a received a $450,000 advance to have Berlin, N.J.-based Goldin Auctions sell it all for top dollar.

Let’s have a show of hands—how many out there discovered to your horror that your mother threw out or gave away something that you cherished from your distant past ? Baseball cards? Old photographs? Letters? Clothes? I was lucky: my parents never threw away anything in their lives. This had its own irritation value, as my mother would produce my 7th grade essays and poems at family gatherings and start reading them (while never showing any interest at all in what I had written recently), often driving me out of the house. At least she never tossed or sold my stuff without asking me.

My wife is still traumatized and angry over the incident in which her charity-obsessed parents gave away one of her cherished dolls because she “hadn’t played with it for a long time, and a poor child would be grateful for it.” This is a fine sentiment, but the cold, hard fact is that the doll didn’t belong to my wife’s parents,  it wasn’t theirs to give away, and doing so was disrespectful, unfair and cruel—an abuse of parental power. But what was my wife going to do, sue them?

There is no way Kobe will come out of this looking anything but terrible. He’s rich; his mother isn’t. For some reason, almost every mother adopts the theory that if her child came to own something while living in her house and didn’t take it along when he or she moved out, the object, no matter what it is, is officially abandoned and becomes house property. For a son to sue a mother for simply acting on this time-honored mother delusion is going to be taken as proof that Kobe is a bad and ungrateful son, and should be traded forthwith to the Clippers, or some other basketball Hell, as punishment.

Admittedly, the fact that Pamela Bryant is not merely giving Kobe’s things to Goodwill, or leaving it out on the curb, but making enough money to pay for six months worth of Michelle Obama vacations makes her a bit less sympathetic. Nonetheless, if I were Kobe, I’d let it go. He’s right, but it’s Mom.

I know who my wife will be rooting for, though.