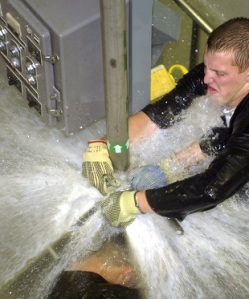 The AP’s president and chief executive Gary Pruitt told the National Press Club this week that the US government’s secret seizure of Associated Press phone records has had a “chilling effect” on news gathering by the agency and other news organizations “Some longtime trusted sources have become nervous and anxious about talking with us,” he said in his speech. .”In some cases, government employees we once checked in with regularly will no longer speak to us by phone. Others are reluctant to meet in person.” He added that this  chilling effect on newsgathering is not just limited to the Associated Press.

My reaction? Bad…and also good. The unprecedented incursions on the news media by the AP operation and the search warrant executed on Fox reporter James Rosen are, I think, pretty obviously, government action that has the effect, and maybe the intent, of intimidating and muzzling the press, and in the case of Rosen, “criminalizing the act of journalism.” This is all ominous for the country, democracy, freedom and the public, and seriously so.

The fact that these efforts have also discouraged leakers and others who breach laws, regulations, promises and professional ethics to satisfy their personal agendas, however, is nothing to mourn. I have long termed the process whereby an untrustworthy employee illegally or unethically leaks information to the press, which then publishes it with impunity, as information laundering. I don’t think such sources ought to have their identity protected—this is an accommodation for reporters that has nothing to do with ethics at all, just pragmatics. Sources should be on the record, not anonymous, and when they reveal information they had promised not to, they should be willing to accept responsibility, accountability, and penalties.

Freedom of the press is sufficiently vital to American ideals that the unethical intimidation of the news media by the government outbalances the ethical result of discouraging sources from doing what has always been wrong. Nonetheless, potential leakers being motivated to obey the law and keep their promises is a good result stemming from an abuse of government power.