“After our own due diligence and a thorough review of the facts, the firm decided to give great weight to the total body of Lee’s work over his 25-plus years as a lawyer. Lee [Smolen] is a well-respected attorney who has learned from his experience and taken all the necessary steps to move forward as a productive member of our team.”

—-A statement by mega-law firm DLA Piper at the time of its hiring of attorney Lee Smolen in February, 2013. Smolen had recently resigned from his previous firm because, we now know, he was under investigation for unethical conduct. This week, he was formally accused of bilking his former firm and its clients with inflated and inappropriate expenses. 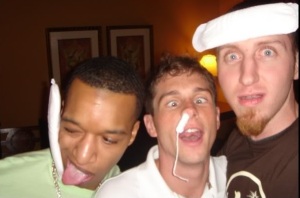 You know, I have no idea why I chose this photo to accompany this post. Just seemed appropriate, somehow…

What would possess a major law firm to make a bone-headed, Ethics Dunce decision like this? According to accounts, before the Piper firm made its commitment, Smolen “tearfully” explained all or some of his transgressions to the firm’s partners, transgressions which amounted to cheating  his fellow partners at his previous firm and fraudulently charging a client for expenses that were either inflated or that had nothing to do with the client’s needs.

He swore that he had learned his lesson, and would never do anything similar again, but look: even if he was sincere, what he had done is a cardinal sin for lawyers, virtually always leading to serious punishment and often disbarment. A lawyer who knows of such conduct is required by the bar ethics rules of all but a couple of states to report it to  bar disciplinary authorities as “a violation of the Rules of Professional Conduct that raises a substantial question as to that lawyer’s honesty, trustworthiness, or fitness as a lawyer.” How could a law firm justify taking on a new law partner after acquiring the same knowledge that would have obligated it to report the man, if he weren’t under investigation already?

You don’t hire someone to handle your clients who isn’t trustworthy, honest, or fit to practice–that’s placing your clients at risk as well as your firm. According to investigators, Smolen fabricated more than $120,000 in expenses over a six year period. That’s not “one mistake,” that’s a pattern of dishonesty. Honest, trustworthy lawyers never steal from their clients, not once, and certainly not repeatedly over six years. Piper gave “great weight to the total body of Lee’s work over his 25-plus years as a lawyer”—are you kidding me? How about giving even more “weight” to the fact that this guy was under investigation for stealing from a client?

Now, any law firm that decided to take a flyer on an attorney who “has learned from his experience”—-learned what, I wonder? That clients don’t like being swindled? That you get in big trouble for lying on expense vouchers? That there are ways to steal money from clients that won’t be discovered?—and is under disciplinary scrutiny would have an obligation, I think, to keep close watch on his conduct after hiring him, and to double-check those expense vouchers. The firm couldn’t warn its clients, because bar investigations, even ones involving serious offenses any client would normally have a right to know about, are confidential. So special caution would be mandatory–except that if you know you are hiring a lawyer that you can’t trust like any other lawyer, the proper course isn’t to keep tabs on him. The proper course is not to hire that lawyer.

Piper’s ethics cluelessness is even worse than you think. For the firm, at the time it hired Smolen, was already embroiled in a serious controversy over its own inflation of client fees to the tune of over a half-million dollars, in a lawsuit that included evidence of Piper lawyers discussing how to maximize charges (“Churn that bill, baby!” was the most sensational example.) I can only speculate why any firm would hire Smolen despite the flares, alarms and red flags, much less one under scrutiny for over billing, but my top theories, in no particular order, would be…