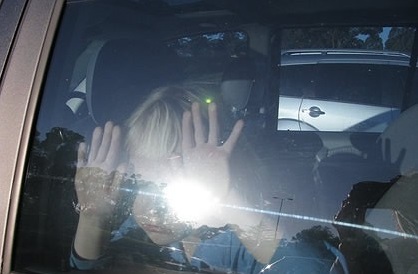 Mom and mom advocate Lenore Skenazy writes the Free Range Kids blog, which I have to remember to check out regularly. She is the source of today’s Ethics Quiz, which she obviously believes has an easy answer. We shall see.

Charnae Mosley, 27, was arrested by Atlanta police and charged with four counts of reckless conduct after leaving her four children, aged 6, 4, 2, and 1, inside of her SUV with the windows rolled up and the car locked.  It was 90 degrees in Atlanta that day. The children had been baking there for least 16 minutes while their mother did some shopping. A citizen noticed the children alone in the vehicle and reported the children abandoned.

Skenazy believes that the arrest is excessive—that the mother made a mistake, but that compassion is called for, not prosecution:

“[T]he mom needs to be told that cars heat up quickly and on a hot summer day this can, indeed, be dangerous. She does not need to be hauled off to jail and informed that even if she makes bail, she will not be allowed to have contact with her children…No one is suggesting that it is a good idea to keep kids in a hot, locked car with no a.c. and the windows up. But if that is what the mom did, how about showing some compassion for how hard it is to shop with four young kids, rather than making her life infinitely more difficult and despairing?The kids were fine. They look adorable and well cared for. Rather than criminalizing a bad parenting decision (if that’s what this was), how about telling the mom not to do it again?”

Do you agree with her? Here is your Ethics Alarms Ethics Quiz of the day:

Was it cruel, unfair, unsympathetic or unkind for Atlanta police to arrest Mosely for leaving her four young children locked in a hot car?

I am an admirer of Lenore Skenazy, but her pro-mother bias led her seriously astray this time. I think she is applying rationalizations, consequentialism and dubious, indeed dangerous reasoning to let this mother off a hook that she deserves to stay on. In her post, she even suggests that the car’s air conditioning was on, though there is no reason to believe that it was based on the reports. If the A-C was on, that changes the situation: I very much doubt that a mother would be charged with leaving four children in a locked, hot car if the car was not, in fact, hot. (One report states that the SUV windows were open, but that wouldn’t support the charges. If the windows were open, then Mosely left her children alone in public, which is a different form of child endangerment, but still dangerous. For the purpose of the quiz, I am assuming that the windows were shut, and that the air conditioning was not on. So does Skenazy.)

When ethics fails, the law steps in. Too many children die every year from this tragic mistake that arises from distracted parenting, ignorance, and poorly aligned priorities. Prosecuting parents like this one for non-fatal incidents is exactly how the law serves as a societal tool to increase public awareness and encourage better conduct. It is in the best interests of Mosely’s four children as well as the children of every parent who reads about or hears her story to prosecute her to the full extent of the law.