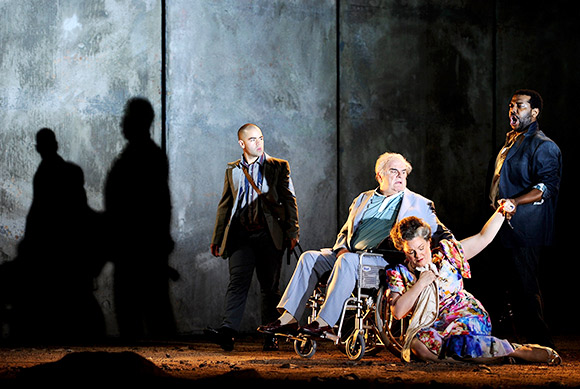 New York’s Metropolitan Opera is scheduled to present John Adams’s 1991 opera, “The Death of Klinghoffer” this fall. [Full disclosure: Adams, then an unknown, was one of my professors in college] The opera is a dramatization of the 1985 Achille Lauro hijacking,in which the Palestine Liberation Front murdered the wheelchair-bound Jewish-American businessman Leon Klinghoffer. The opera has always been the target of Jewish and other critics who believe that it is too sympathetic to the Palestinians, and is thus anti–Semitic. Predictably (although for some reason the Met seemed not to be prepared for it) the Anti-Defamation League and conservative pundits are condemning the new production, typified by the reliably simple-minded Michele Bachmann, who denounced the Met for sympathizing with terrorists.

This is, and I state this without moderation or equivocation, is anti-cultural, anti-art, anti-free speech political correctness bullying from the right. This is an opera, and it, like any work of art, stands for itself. Whatever the political message of “The Death of Klinghoffer,” it is secondary to the main purpose of any opera, which is music and entertainment. The Met, as an organization dedicated to music and opera, should not be held to any standard in producing it other than whether it meets the company’s standards of excellence. An arts organization like the Met is apolitical, and should never allow the political or ideological messages of the artists whose work is presented there change its programming in any way. This means telling critics like those of “The Death of Klinghoffer,” be they advocacy organizations, would-be public censors or embarrassments to Congress like Bachmann to go fly a kite when they attempt to dictate what art is or isn’t “appropriate.”

As the soon to be ex-artistic director of a professional theater company whose only criteria for what stage works to produce are 1) Is the play or musical any good? 2) Is it American? 3) Are other companies producing it? and 4) Can we do it and its creators justice?, I have considerable experience in this issue.

Neither I, nor the board, ever took political or social sensitivities into consideration in choosing the shows we did, and never backed down when we received objections from donors or subscribers, or, in what was the more common penalty, unjust criticism from theater critics with their own biases. Our audience is substantially senior and well-educated, meaning we have a strong component of conservatives as well as liberals. I directed the pro-labor, indeed, crypto-Communist opera “The Cradle Will Rock.” We produced the corrupt union drama “On the Waterfront.”  We did two plays by Gore Vidal, who is widely derided as an anti-Semite; we produced “A Flag is Born,” which was post-war pro-Israel agitprop regarded when it was written as advocating terrorism.

“The Robber Bridegroom” made some critics and audience members angry because it can be seen as romanticizing rape. “Uncle Tom’s Cabin” used the word “nigger” twelve times in its first 12 minutes.  “Native Son” attracted controversy: socialist activist actor Danny Glover came to a performance to argue with Richard Wright’s thesis, which was that racism can turn young black men into monsters. We did “The Boys in the Band,” which simultaneously offended some gays who feel the play’s portrayal of homosexuality is stereotyped, and many others, conservative straights, who objected to the play’s frank portrayal of a group of gay men. We did shows, in short, that included sexist material, pro-war messages, anti-war messages, patriotic messages, anti-American messages, pro labor, anti labor, racist, civil rights, you name it, all with the goal of allowing audiences to experience important works of art by brilliant creative minds. That was our message, because that was our mission, and we had an ethical, professional duty to strive for that. The artists? They speak for themselves. If they make audience members angry or uncomfortable, then the art is working.

But the Met surrendered, essentially. It wouldn’t cancel the production, but it cancelled the transmission planned for its Live in HD series, which goes out to movie theaters around the world. Thus many fewer audiences will be able to see the rarely produced “The Death of Klinghoffer” —now or ever, probably—and decide about it themselves. The Met’s general manager, Peter Gelb, explained that while he did not believe the opera to be anti-Semitic, the Met had concluded it “would be inappropriate at this time of rising anti-Semitism, particularly in Europe.” In other words,

If art matters, and the existence of the Met must constitute an assertion that it matters, then the fact that the Israel-Palentinian conflict is in the news is the best argument for producing the opera, not burying it.When Orson Welles directed “The Cradle Will Rock,” the nation was in the midst of labor upheaval and a Depression; the opera calls for a workers’ revolution. That was at a time when theater did matter, and had real cultural power: when was the last time you recall an opera having any social impact at all? It should be the Mets’ fondest dream for its production to affect world debate, or for anyone other than rich socialites and opera nuts to care what the Met produces.

This is the same theme I have written about elsewhere, as in the Redskins’ controversy. The bullies trying to make the Met bend to its will don’t care about opera. Abraham Foxman, the national director of the Anti-Defamation League, admits that he hasn’t seen opera, but that hasn’t stopped him from condemning it. Does anyone think Rep. Bachmann has seen the opera?  They are using the Met’s production to press their own agenda and get publicity for their own views, and if it interferes with a work of art being performed, singers singing, stagecraft and an orchestra at its best, so what? That’s collateral damage to them.  They don’t care about opera, music, performance, artistic integrity, or art. Just power.

That’s the Metropolitan Opera’s job and its duty: to care. To stand up for art, and protect the right for artists to have their works presented, and audiences to have the chance to see and experience then.

5 thoughts on ““The Death of Klinghoffer” : The Metropolitan Opera Flunks Its Ethical Duty”