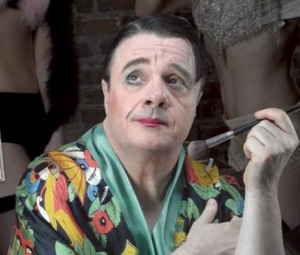 Hey, if Nathan is happy, then the NFL is happy…

The Dallas Cowboys signed openly gay defensive lineman Michael Sam to be a member of its taxi squad, thus making him–let’s see,now—the first gay NFL practice squad player ever, at least the first to let everyone know his sexual proclivities. Wow…that’s some great plot for a made-for-cable movie! I’m getting goosebumps already!

Some sportswriters had opined that it would be a “disaster” for the NFL if Sam , who was cut by the Rams, the team that drafted him, wasn’t signed by some pro team, on the theory that this would expose the whole league as bigoted against gays. Of course, it could also mean that Sam just isn’t good enough, and whom he chooses to roll in the hay with isn’t considered either a virtue or a detriment to playing NFL football. This would be called, I believe, common sense and integrity.

Never mind. Several sources report that the NFL, also believing that there was a looming disaster, “lobbied” teams to sign Sam after he was cut. This both establishes a policy of gay affirmative action in the NFL, and also exemplifies what is wrong with all affirmative action. Let’s make a list:

1. The NFL lobbying teams to sign a player because he is gay is unfair to whatever non-gay player that is not signed who would have won a job if his competition didn’t have controversial places he enjoys sticking his schnitzengruben and hadn’t announced this to the world.

2. Doing so means that the NFL is encouraging teams to make personnel decisions based on political, social and public relations reasons rather than on-the-field competitiveness. This is a breach of integrity and a betrayal of the game as well as its fans.

3. Such lobbying is also unfair to Sam, as it does not permit him to win the job on his own merits and talent, and taints the decision to sign him even if it was made without reference to his sexual orientation.

4. Thus, the non-gay players who made the team the old fashioned way–because they playe football well, not because of what gender they like to play slap and tickle with, have no reason to respect Sam, and legitimate reason to resent him…as if he won’t have enough problems being accepted.

5. The NFL’s pro-gay lobbying is also mind-numbingly, jaw-droppingly, teeth-fall-out-and shatter-on-the-floor-stupid, as being gay has no connection to playing football in any way, and thus an affirmative action policy to have one gay player on some team’s practice squad achieves nothing positive while making the rest of the teams look homophobic (if they weren’t, why lobby?) and the game itself look like it is being run by the EEOC.

For their part, the Cowboys, who signed Sam, deny that they were lobbied. Of course they do. I’m sure that was part of the NFL’s “please sign this gay player, it’s not like you ever have to put him in a game” pitch. What are they going to do, answer the sports media’s questions by saying, “Yeah, that’s why we signed him. He’s not really good enough, but we want to be sure that  Ellen Degeneris, Jody Foster and Nathan Lane don’t get mad at us”?

The Michael Sam episode is an ethics debacle, all the way around.