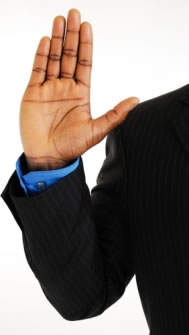 Richard Painter is a distinguished, ethics-savvy attorney of a progressive bent who teaches legal ethics and who is a frequent contributor to the Legal Ethics Forum. He has formulated a legally enforceable candidate’s pledge requiring a member of Congress, once elected,not to accept campaign contributions except from natural persons residing in a congressional district and a promise, after leaving Congress, not to accept a lobbyist job that would entail lobbying former colleagues in the Capitol.

Painter was inspired to do so, he says, when contacted former student  who is managing the John Denney for Congress Campaign in Minnesota’s Sixth Congressional District.  Denny wants to take such a pledge, and Painter obliged with the document below.

What do you think?

I _______________ AS CANDIDATE FOR CONGRESS IN THE _____DISTRICT OF [STATE], AND LATER, IF ELECTED, AS A MEMBER OF THE UNITED STATES HOUSE OF REPRESENTATIVES (“PROMISOR”), AGREE TO TRULY HOLD MYSELF ACCOUNTABLE TO MY CONSTITUENTS BY MAKING LEGALLY ENFORCEABLE MY CAMPAIGN PROMISES AND SUBJECTING MYSELF TO THE BELOW ANTI-CORRUPTION PROVISIONS AND PENALTIES NOT CURRENTLY ENFORCEABLE AGAINST OR APPLIED TO ANY CANDIDATE FOR OR MEMBER OF CONGRESS.

AS PROVIDED IN ITS ARTICLES OF ORGANIZATION, FOR ANY SUCH RECOVERY MINNESOTA SIXTH RECEIVES FROM ANY CANDIDATE OR MEMBER FOR BREACH OF CONTRACT, AFTER PAYING ALL APPLICABLE EXPENSES AND TAXES, MINNESOTA SIXTH SHALL DISTRIBUTE ALL REMAINING AMOUNTS RECOVERED TO CHARITIES THAT SERVE, PRINCIPALLY, THE INTERESTS OF THE PEOPLE OF THE SIXTH DISTRICT.  THE ARTICLES OF ORGANIZATION OF MINNESOTA SIXTH SHALL PROVIDE THAT ITS MANAGING MEMBERS SHALL ALL BE RESIDENTS OF THE DISTRICT WHO ARE COMMITTED TO THE PRINCIPLES SET FORTH IN THIS AGREEMENT.

1. No Conflict of Interest Campaign Contributions. Promisor shall not intentionally and directly solicit or Knowingly Accept any campaign contributions that create a conflict of interest (“COI Contributions”) with Promisor’s duty to represent, exclusively, the people of the District Promisor represents.

2  Lifetime Ban on lobbying Congress. Promisor agrees to self-impose and adhere to a lifetime ban on Lobbying back to any member or staff of the United States House of Representatives or Senate for compensation after serving any congressional term.

Knowingly Accept means to expressly accept or Impliedly Accept any contribution of any legal tender.

Express rejection may be made in any manner reasonably calculated to give notice to donor and the public.

COI Contributions are campaign funds donated to Promisor by any political party, Political Action Committee (PAC), labor union, for-profit corporation, Special Interest Group, or any individual not residing in the State of Minnesota who is not also a Family Member of Promisor.

Special Interest Groups are industry or advocacy associations or groups that focus on particular issues, or any other group that seeks through its contributions to influence legislation.

Family Member means any family member or immediate relative as defined by the Office of Personnel Management under 75 C.F.R. § 33491 (2010).

Lobbying shall have the same meaning as set forth in the Lobbying Disclosure Act of 1995 as amended.

4. Penalties/Damages in the Event of Breach.

Section 2. Promisor must pay out of Promisor’s personal funds liquidated damages to Minnesota Sixth in an amount equal to Promisor’s entire earnings to date as a Member plus the agreed upon amount of Promisor’s first year salary as lobbyist.

13 thoughts on “A Proposed Enforceable Campaign Pledge To Reject Corruption”