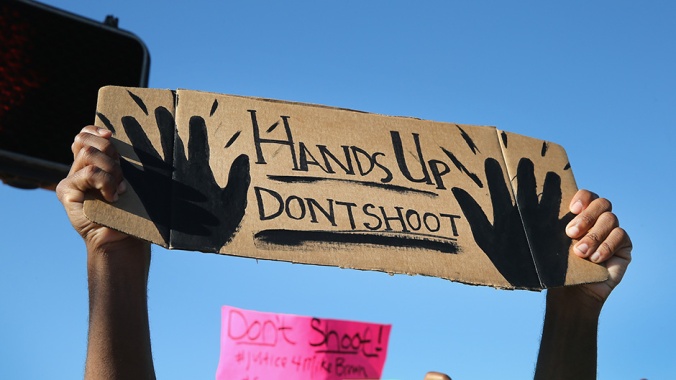 How does the culture, the news media, the civil rights  industry, and politicians determined to benefit by making African-Americans suspicious, paranoid, racist and, of course, lifetime Democrats, make amends for this? How do they undo the damage to mutual trust and American society?

Obviously they don’t. They don’t even try. In fact, all indications are that they will refuse to acknowledge that the entire, national effort to portray the tragic confrontation between Michael Brown and Officer Wilson as a race-triggered execution was based on a lie that was presumed to be accurate despite much reason to doubt it.

The original claim that Brown was shot and killed after putting his hands in the air came from his friend and partner in crime, Dorian Johnson. Johnson, who already had a record of lying to police, was with Brown prior to the August 9 confrontation, and had joined him in the petty robbery that occurred just before Brown’s arrest. In his TV interviews  after the shooting, Johnson said that Wilson shot Brown in the back, causing him to turn around with his hands up, pleading, ‘I don’t have a gun, stop shooting!’ Before the grand jury, Johnson, who admitted that he hid during the incident and later ran home to change clothes so he wouldn’t be identified, even elaborated and provided minute details to his fabrication, stating under oath that the shot in his back caused Brown’s body to “do like a jerking movement, not to where it looked like he got hit in his back, but I knew, it maybe could have grazed him, but he definitely made a jerking movement.” The forensic evidence showed that Brown was not shot in the back.

Other witnesses concocted similar testimony demonizing Wilson after hearing the media’s credulous accounts based on Brown’ friend’s claims. One told the FBI that he saw Wilson shoot Brown in the back and then stand over his prone body to “finish him off.” In front of the grand jury, however, this witness acknowledged that he had not seen that part of the shooting. He explained that the false story he told the FBI was “based on me being where I’m from, and that can be the only assumption that I have.”

Sort of like Democrats have to believe such false narrative because the presence of deadly, virulent racism is core to the party’s appeal to African American voters…

Then, he admitted,  he changed his story to fit details of the autopsy once it was reported on TV.  “So it was after you learned that the things you said you saw couldn’t have happened that way, then you changed your story about what you seen?’ a prosecutor asked. “Yeah, to coincide with what really happened,” the witness replied.

Members of the community, activists, anti-police zealots and those who had observed how effective the Trayvon Martin hoodie symbolism had been in casting George Zimmerman as a racist killer (rather than as he was subsequently shown to be, an irresponsible, unbiased jerk) immediately seized on the gesture as a powerful protest symbol. Every time it was repeated in a protest or demonstration, it was Johnson’s lie multiplied, until the narrative that Officer Wilson shot an unarmed, unresisting teenaged black male who was pleading to live was imbedded in the American mind. Of course it was murder! Of course any system that does not immediately charge the rogue police officer with murder is corrupt and flawed.

I have had conversations with well-intentioned liberals in denial,who are obviously unable to think of what occurred in Ferguson any other way. Such frustrating conversations. As in the Martin case, they want the white shooter to be guilty of racism and brutality. The fact that no clear evidence will show that, as the grand jury found out, doesn’t dissuade them, even though they would nod vigorously if activists argued that prosecutors displayed racism by indicting any black suspect when eye-witness testimony was unreliable.

Oh, it is true that their confusion is compounded by not understanding what a grand jury does, or hearing references to the quote that a prosecutor can make a grand jury “indict a ham sandwich” (not recognizing that this was a criticism, or perhaps having no more regard for a young policeman’s life than they do a ham sandwich, because, you know, white cop), and that they have been conditioned to believe from their SDS veteran professors from the Sixties that police officers are not public servants but really diabolical agents of an overbearing state—not that they don’t want an overbearing state in most matters, just not where public safety…okay, it’s complicated!). Still, what most nourishes their fervor now—how I love being told that I am taking my cues from Fox News!—is the indelible image of young, frightened, unarmed Mike Brown, with his hands in the air.

How does Darren Wilson get his career, reputation and life back after a lie is promoted as fact by the media, and ruthlessly used by race-hucksters to destroy him while escalating racial distrust? How does the culture recover from this deep, self inflicted wound?

It is not the criminal justice system that is so in need of repair, but our system of communicating important events to the public, so that bias doesn’t overwhelm truth, and we will be able to forge the right lessons from tragedies like Michael Browns death, not false lessons that leave us more ignorant, hateful, and afraid.

UPDATE 2 (12/2/14): An examination of Johnson’s credibility on this issue in the Washington Post

39 thoughts on “It Appears Likely That Michael Brown Did NOT Have His Hands Up When He Was Shot… Now What?”