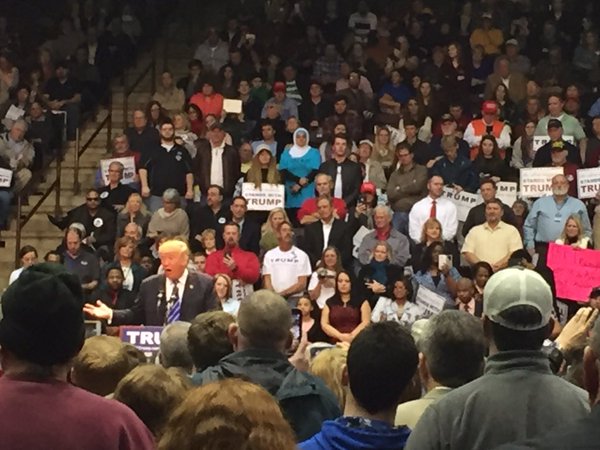 I have said it before, and will undoubtedly have many more opportunities say it: If you can’t find fair and factual ways to discredit Donald Trump, you really shouldn’t be in the journalism profession. Walmart beckons.

Today’s disgrace is ThinkProgress. I know that progressive reporters have long accepted the anti-journalism ethics philosophy of their “by any means necessary” political heroes, but even by the dismal standards of recent years, Judd Legum and his editors really abandoned all respectability with this one. The headline:

This isn’t even deceit. The headline is an outright lie. The woman, Rose Hamid, was warned as she entered a Trump campaign event in South Carolina that any demonstration or disruption would be met with ejection. Nevertheless, she and a companion, complete with message t-shirts and symbolic yellow stars protesting Trump’s position on Muslim immigrants, stood up in their seats behind the GOP frontrunner while he was speaking. As promised, they were escorted out.

Hamid was not kicked out “for being Muslim.” She was kicked out for violating the rules of a private event. She stood up as a protest. It wouldn’t matter if she  was dressed in Islamic garb, in a Franklin Pierce costume, or in Scout’s ham outfit from “To Kill A Mockingbird.” She was protesting. Out. That was the deal. The headline is deliberately false.

So was Legum’s first sentence, though it directly contradicted the headline: “A Muslim woman was kicked out of a Donald Trump rally on Friday night for no apparent reason.”

Wait—the headline I just read said there was a reason: she was kicked out for being Muslim. There it is, in black and white. So which is it? Was she ejected for no apparent reason, or for being Muslim? I know it doesn’t matter to the progressive hacks at ThinkProgress which it is, because their only objective is to make Donald Trump look like a bigot and a bully—which he is, of course— but ethical journalists, plus any with the skill of middle school paper cub reporters, should be able to demonstrate that using, you know, facts, without having to make stuff up. Because neither the headline nor the first sentence were true. The woman and her companion were ejected for one specific reason, and a perfectly reasonable one having nothing to do with being Muslim.

It’s called violating the explicit conditions of attendance.  If a patron at a performance of my late lamented theater company stood up in the middle of  a performances, I would throw her  out.  Would I do this because she was resplendent in Muslim garb? Nooooo…try again! For no reason at all, because I just like expelling ticket-holders?

Sorry, strike two. Give up?

I would kick her out because audience members aren’t supposed to stand up and draw attention to themselves when everyone is supposed to be watching the show, that’s why—exactly the same reason Rose was removed. Fairly. Reasonably. As she undoubtedly intended an knew she would be.

You know, ThinkProgress fans, if you voluntarily read publications that make up stuff and lie to their readers, something is wrong with you.

UPDATE: Gov. Kasich continues his self-diminishment by criticizing the treatment of the woman, as if people who choose to disrupt speeches should be guaranteed of anything but removal from a private event.  Again, if you can’t find legitimate reasons to criticize an ass like Trump, you are incompetent.

UPDATE 2: How will ThinkProgress headline this?

Two Muslim women at Barack Obama’s rally in Detroit on Monday were barred from sitting behind the podium by campaign volunteers seeking to prevent the women’s headscarves from appearing in photographs or on television with the candidate.

The campaign has apologized to the women, both Obama supporters who said they felt betrayed by their treatment at the rally.