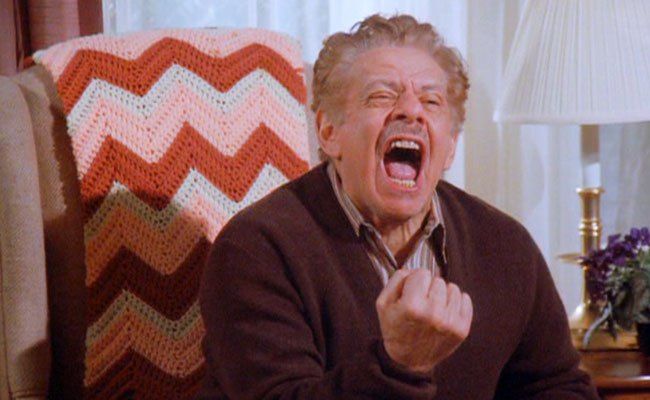 “So when you hear arguments over whether Cruz can be president, don’t worry about the senator from Texas. Think instead about the little girl adopted from China, learning about civics in her second-grade classroom and being told that she can never become president of the only country she has known.”

I love this quote, in no small part because it provides a neat exception to the general rule that an advocate using “Think of the Children!” as an argument is usually as sign that the advocate doesn’t want us to think at all. In this case, however, it is appropriate to think of that Chinese orphan, or my Russia-born son (rather than, say, George Costanza’s Italian born father on “Seinfeld,” who ignored politics on the grounds that he felt unfairly prohibited from running for President, shouting, “They don’t want me, I don’t want them!”), as well as figures like Arnold Schwarzenegger. The requirement for Presidents to be not just citizens in good standing, but “natural born” citizens, is the epitome of a Constitutional provision that once made sense but now does not. Marcus:

“It arose in a 1787 letter from John Jay, later to be the first chief justice, to George Washington, in which Jay questioned “whether it would not be wise & seasonable to provide a … strong check to the admission of Foreigners into the administration of our national Government; and to declare expressly that the Command in chief of the American army shall not be given to, nor devolve on, any but a natural born citizen.”

The point of the presidential eligibility rule, Justice Joseph Story explained in 1833, was that “it cuts off all chances for ambitious foreigners, who might otherwise be intriguing for the office; and interposes a barrier against those corrupt interferences of foreign governments in executive elections.”

That risk, Sarah Helene Duggin and Mary Beth Collins explained in a 2005 article in the Boston University Law Review, is no longer present. “Any historically legitimate justification for the proviso faded away long ago,” they wrote. “Fortunately, our independence from England is now secure, and the United States has grown from a fledgling former colony into the most powerful nation in the world.”

Unlike other controversial Constitutional rules, however, this one doesn’t have a rational justification any more. It’s sole use as a “gotcha!” which is essentially how Donald Trump is using it against Ted Cruz. The requirement was well on its way to dead letter status in the 19th Century, when nobody seemed to care that Chester A. Arthur may have been born in Canada to Canadian citizens, and therefore not “natural born, sufficiently to block his nomination as James Garfield’s Vice-President in 1880. When Garfield was assassinated, we had our first non-natural born President since the Constitution was ratified, at least according to some “birthers.” He did a pretty good job, too.

Laws are laws, however, and the Constitution, contrary to the Obama Administration’s operating philosophy, should be followed, not gamed, manipulated and ignored. We need a final settlement of what “natural born” means in Cruz’s case, so raising the issue is as responsible as it is obnoxious. What do we do about that little Chinese girl, though, and Frank Costanza?

Options are limited. There are dead letters in the Constitution (like the Commerce Clause) but there aren’t supposed to be. Nobody in their right mind wants a Constitutional convention. Constitutional amendments have been impossible for decades, but maybe this one is obvious enough and uncontroversial enough to make it. I would worry that amending the founding document successfully might start renewed enthusiasm for more mischievous changes, but it’s not a big worry. The last amendment provided for a President to fill a Vice-Presidential vacancy with an appointment validated by Congress; eliminating a now-senseless bias against naturalized citizens seems no more controversial, assuming naturalized illegal immigrants  aren’t …oh, oh.

Maybe Frank is out of luck.