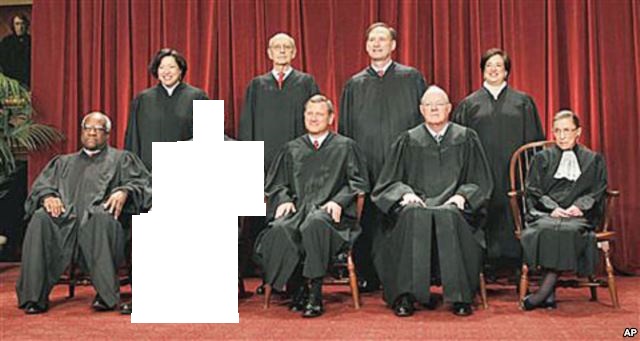 The short review would be “Yecchh.”

The reason that the earlier Ethics Alarms post about the death of Justice Scalia expressed the wish that President Obama on his own declare that he would defer the almost certainly futile appointment of a successor to the tender care of the next President was precisely because it was obvious that any other course was just going to create more ugly partisan name-calling and hypocrisy, accomplishing nothing positive and wasting a lot of energy and time. I also knew that this most divisive of POTUS’s would no more do that than he would deliver his next speech in a duck voice. Thus we have the theater, with people who should know better acting like the Republican Senate’s announcement that it would not be voting on President Obama’s nominee, should he make one, is some  kind of gross breach of duty and ethics, and people who don’t know better acting as if being one Justice short is some kind of Armageddon. Neither is true.

A Democratic President with both Houses controlled by the Republicans

An ideologically and evenly divided Court, with the new Justice potentially having a momentous and nation-changing effect on the determination of many looming cases

An unusually partisan and ideological President who has proven unwilling and unable to seek legitimate input from the opposing party, and who, in fact, has been personally and bitterly insulting toward it

A rebellion against the “establishment” in both parties, from the extreme reaches of both parties, on the grounds that neither is extreme or combative enough

A lame duck, not especially popular President and an approaching national election that is currently being molded by unpredictable personalities and events, and is likely to be hotly contested..

The Supreme Court unusually central to the government of the country.

The vacancy on the Court being created by the death of one of the Court’s most influential, ideological and powerful members.

A degree of political division in the public not experienced since the Civil War.

These are all material factors, made more material in some cases because of the other factors. Thus accusations that the Republican have engaged in some kind of grand, historical crime against democracy is, to the extent the accusers believe it, crap, and to the extent that they don’t, ignorant.

The Republican position is politics, no more, no less. It is not dirty politics, unethical politics or illegal politics. It is a measure with the clear design of increasing the chances of Republicans prevailing in the policy and social debates currently facing the nation, and in the view of Republicans, in the best interests of the nation. As for the Democrats,

1. They would, in all likelihood, do the exact same thing if the positions of the parties were reversed, and thus their current outrage is either manufactured, dishonest, stupid, or hypocritical.

2. That too is politics, but of the “let’s fool most of the people one more time” variety. it is not ethical to declare conduct un-American and wrong when you know damn well that it is exactly what you would do. That is the current Democratic position, being aped by the mainstream media.

The ignorance of the public regarding just about everything involved is one reason the party’s are tempted to misrepresent such situations. I thought about linking to a bunch of authorities and historical notes, but I’m tired and depressed, and this debate isn’t helping my mood any. You can find them easily, but take my word for it:

Obama’s decision to appoint someone, knowing that he or she probably will be shelved is also political. It will give Democrats a campaign issue (they hope). If he appoints some controversial judge who is also a minority, Democrats will be able to use it as a wedge with various minority constituencies, even though the race, gender, and ethnicity of the nominee ought to be irrelevant. Never mind—group identification and quotas over quality is the current obsession of the Democratic party.

The interesting ethics question: if he makes the appointment, not to get a justice on the court but to create political and societal divisions that will assist Democrats in the election by having the choice languish, would that be ethical?

It is per se unethical to use a Supreme Court appointment for any purpose other than to strengthen the Supreme Court, in the view of the President making the appointment. To take a ridiculous example, if it could be shown that the President felt that he could attract Trump  voters by forcing Republicans to reject a drooling, racist, intemperate idiot for the court and thus nominated one, that would be wrong. The Supreme Court is too important for these kinds of games, and no, what the GOP is currently doing is not a game.

It is also unethical for Obama to misrepresent the Constitution, which he is doing. (How he gets away with still being called a “constitutional scholar” when he has been publicly dead wrong about the document so frequently is a miracle.) From the Post:

Obama told senators he has a constitutional duty to nominate a new justice after Saturday’s death of conservative Justice Antonin Scalia and reminded them of their constitutional obligation to “do their job” and vote to approve or reject his nominee….“I’m amused when I hear people who claim to be strict interpreters of the Constitution suddenly reading into it a whole series of provisions that are not there,” Obama said. “The Constitution is pretty clear about what is supposed to happen now.”

Yup. And what is pretty clear is that the Senate has no Constitutional obligation to approve or vote on the nomination at all. Writes Professor Illya Somin at the Volokh Conspiracy today:

The Constitution is indeed clear on this issue, but not in the way the president suggests. Article II, Section 2 of the Constitution states that the President “shall nominate, and by and with the advice and consent of the Senate, shall appoint ambassadors, other public ministers and consuls, judges of the Supreme Court, and all other officers of the United States, whose appointments are not herein otherwise provided for, and which shall be established by law.” Notice that the Senate is not required to give its “advice and consent.” Rather, its consent is a prerequisite to enabling the president’s nominee to take up his or her office.

Article II, Section 2 does not lay out any specific procedure by which the Senate can refuse its consent. It does not indicate whether it must do so by taking a vote, or whether it can simply refuse to consider the president’s nominee at all. However, Article I, Section 5 states that “Each House may determine the rules of its proceedings.” That power includes the rules for considering judicial nominations, as well as all other Senate business. Thus, so long as the Senate has established rules that allow it to refuse to vote on a nominee, it can do so – just as it can refuse to vote on bills, treaties, or any other business that comes before it.

This interpretation of the text is consistent with years of practice. Both Democrats and Republicans have often blocked judicial nominations by filibustering them or otherwise preventing them from coming to a vote. In one well-known case, the Democrats held up George W. Bush’s nomination of Miguel Estrada to the DC Circuit for over two years, until he was finally forced to withdraw without ever getting a vote of any kind. They did so because they had concerns about Estrada’s judicial philosophy – exactly the same reason why Republicans might end up blocking Obama’s Supreme Court nomination today.

Democrats, and democratic true believers, have every reason to try to pressure, insult and otherwise beat on Republicans to promote conduct that maximizes the chances of having a left-wing zealot replace Scalia, but they may not ethically misrepresent what is going on. The Senate is not “refusing to do its job,” nor is it doing anything Democrats wouldn’t do, and haven’t done, and recently, regarding other court nominations. I’m tempted to say that we know the Democratic and news media mau-mauing is intellectually dishonest, because Harry Reid is leading it. Any time you follow Harry Reid’s view of what’s “right,” your ethics alarms should start ringing.