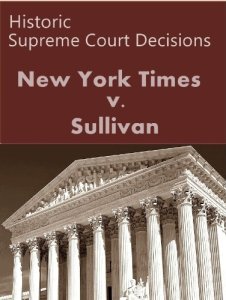 Yesterday, flushed with the fact that polls said he “won’ this week’s debate despite outrageous lying, posturing, and incoherence, Donald Trump said that if elected, he will muzzle journalists with fear of libel suits:

It’s hard to say what is the dumbest or most alarming thing Trump has said this campaign season, but this is close. To begin with, journalism cannot function under the constant threat of libel suits. This device is already used to bully websites, a form of journalism, and blogs like mine, which don’t have the resources to fight censorious and frivolous suits. Second, the statement proves that Trump is ignorant about the Constitution, ignorant about the law, ignorant about American values—Can you make America great again when you don’t comprehend the culture, traditions or history in the first place? Of course not—and ignorant about the powers of the Presidency, which is fairly shocking for someone running for the office. Luckily for Trump, and unluckily for the country, a lot of Americans are even more ignorant than he is.

Third: this can’t be done unless Trump intends to declare himself Emperor, or something similar. The Supreme Court dealt very emphatically with this issue in the 1964 case of New York Times v. Sullivan, which ruled that win a defamation case against a newspaper (and now, by extension, any journalist), a plaintiff must show four things: 1) a false statement purporting to be fact; 2) publication or communication of that statement to a third person; 3) fault; and 4) some tangible harm  to the person or entity who is the subject of the statement. Public officials and public figures–celebrities, people in the news, reality stars, Bozo the Clown— must show that alleged libelous statements were made with actual malice—that is , they were maliciously intended to harm the subjects and the writer and publisher knew they were false, or were reckless is determining if the were false or not-–to recover in an action for defamation.

The standard of proof is also high for libel against the press, and this is to protect the press. A plaintiff must show actual malice by “clear and convincing” evidence rather than the lesser burden of proof in most civil cases, preponderance of the evidence.

Sullivan is a bulwark of First Amendment jurisprudence. It isn’t going anywhere. Conservative justices wouldn’t overturn it; liberal justices wouldn’t touch it. Justice Scalia, brought back from the dead, would declare it untouchable. If there is a single legal scholar who has advocated overturning the case in whole or in part, he or she is an outlier or a crackpot. It was a 9-0 decision. Justice Brennan, writing for the Court, wrote…

The general proposition that freedom of expression upon public questions is secured by the First Amendment has long been settled by our decisions. The constitutional safeguard, we have said, “was fashioned to assure unfettered interchange of ideas for the bringing about of political and social changes desired by the people.” Roth v. United States, 354 U.S. 476, 484.

The maintenance of the opportunity for free political discussion to the end that government may be responsive to the will of the people and that changes may be obtained by lawful means, an opportunity essential to the security of the Republic, is a fundamental principle of our constitutional system...The First Amendment, said Judge Learned Hand, presupposes that right conclusions are more likely to be gathered out of a multitude of tongues than through any kind of authoritative selection. To many, this is, and always will be, folly, but we have staked upon it our all...

Those who won our independence believed . . . that public discussion is a political duty, and that this should be a fundamental principle of the American government. They recognized the risks to which all human institutions are subject. But they knew that order cannot be secured merely through fear of punishment for its infraction; that it is hazardous to discourage thought, hope and imagination; that fear breeds repression; that repression breeds hate; that hate menaces stable government; that the path of safety lies in the opportunity to discuss freely supposed grievances and proposed remedies, and that the fitting remedy for evil counsels is good ones. Believing in the power of reason as applied through public discussion, they eschewed silence coerced by law — the argument of force in its worst form. Recognizing the occasional tyrannies of governing majorities, they amended the Constitution so that free speech and assembly should be guaranteed.

Thus, we consider this case against the background of a profound national commitment to the principle that debate on public issues should be uninhibited, robust, and wide-open, and that it may well include vehement, caustic, and sometimes unpleasantly sharp attacks on government and public officials. The present advertisement, as an expression of grievance and protest on one of the major public issues of our time, would seem clearly to qualify for the constitutional protection. The question is whether it forfeits that protection by the falsity of some of its factual statements and by its alleged defamation of respondent.

Authoritative interpretations of the First Amendment guarantees have consistently refused to recognize an exception for any test of truth — whether administered by judges, juries, or administrative officials — and especially one that puts the burden of proving truth on the speaker.In Cantwell v. Connecticut, 310 U.S. 296, 310, the Court declared:

“In the realm of religious faith, and in that of political belief, sharp differences arise. In both fields, the tenets of one man may seem the rankest error to his neighbor. To persuade others to his own point of view, the pleader, as we know, at times resorts to exaggeration, to vilification of men who have been, or are, prominent in church or state, and even to false statement. But the people of this nation have ordained, in the light of history, that, in spite of the probability of excesses and abuses, these liberties are, in the long view, essential to enlightened opinion and right conduct on the part of the citizens of a democracy.”

…What a State may not constitutionally bring about by means of a criminal statute is likewise beyond the reach of its civil law of libel.The fear of damage awards under a rule …may be markedly more inhibiting than the fear of prosecution under a criminal statute….Whether or not a newspaper can survive a succession of such judgments, the pall of fear and timidity imposed upon those who would give voice to public criticism is an atmosphere in which the First Amendment freedoms cannot survive….

So what does Trump’s ridiculous vow mean? As I said, it could mean that he is a Constitutional ignoramus, that he is pandering to those uneducated voters he loves, that he is lying,  that he plans a military take-over, or all of them: Who knows what diseased rats are running around in that skull?

There is hope in this, however, and I know I have mentioned it before. [Here, and here.] Trump is a case of out-of-control hubris, and though Fredo keeps saying that he’s smart, I doubt he has read the classics sufficiently to heed the wisdom of my forebears, the Greeks. Every time Trump gets away with an offensive, presidential, dishonest or idiotic statement, he becomes more certain of his own invulnerability, and pushes it just a bit farther. There will come a point where even the angry, poorly educated, undiscriminating Trump voters will wake up, slap their forehead and say, “Holy crap! This guy is a nutcase!”

It will happen. But we cannot take even the minuscule the chance that it won’t happen until after he is elected President of the United States.

17 thoughts on “The Costs Of Civic Ignorance: We Now Have A Frontrunning Candidate For President Who Wants To Gut Freedom Of The Press”