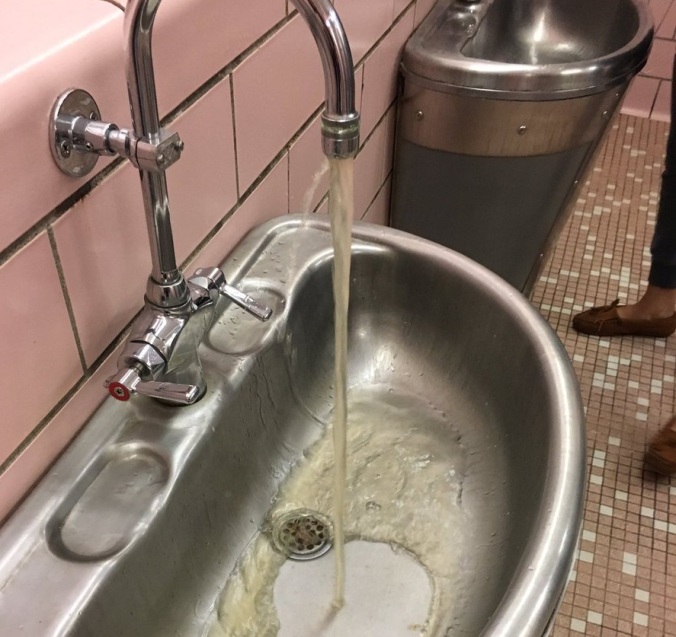 Hazel Juco, a 17-year-old student at John Glenn High School in suburban Detroit, went to the school’s bathroom to wash her hands. When she turned on the faucet, ugly brown water came out. She then used her cell-phone to take the picture above of the discolored water and posted it to Facebook and Twitter.

Juco says she was soon called to the principal’s office shortly after she posted the photo.“They told me I was being suspended… It’s inappropriate use of electronics in the restroom. And every girl takes selfies in the bathroom and makes it their profile pictures and no one has gotten in trouble,” she said. Indeed, that policy, it has been noted, didn’t seem to apply to the many students in the school whose cell phone use didn’t involve exposing health hazards that school administrators should not allow to exist.

Thanks to social media, the school’s outrageous conduct didn’t remain an internal matter, as it would have in an earlier era. Hazel’s photos were widely circulated, and eventually the news media became involved. After all, this is Michigan, and there was that little episode involving inept elected officials and agency administrators poisoning the Flint water supply just a few months back. Hazel Juco was hardly being an alarmist.

When reporters called Wayne-Westland Community Schools Superintendent Dr. Michele Harmala, and she said school administrators made a mistake by not reporting the water issue to maintenance, and the rule against students taking pictures in bathrooms was misapplied, since Juco was taking photos of polluted water rather than students using the toilet. It’s an easy mistake to make! Anyone could make it!

The deteriorating  pipe leading to the faucet is being replaced, and the suspension has been expunged from Juco’s record. How nice. Nonetheless, the fascist, incompetent and abusive administrators remain in their jobs, and though Hazel’s unjust punishment has been retracted, the message sent by it remains. The school has taught the lesson that it is dangerous to speak out, perilous to blow the whistle, and risky to point out the deficiencies of those with power.

Unless the counter-message is sent that Hazel did the right thing, and that serious career consequences await administrators and teachers who seek to cover up their own ineptitude by intimidating students, these episodes will continue.