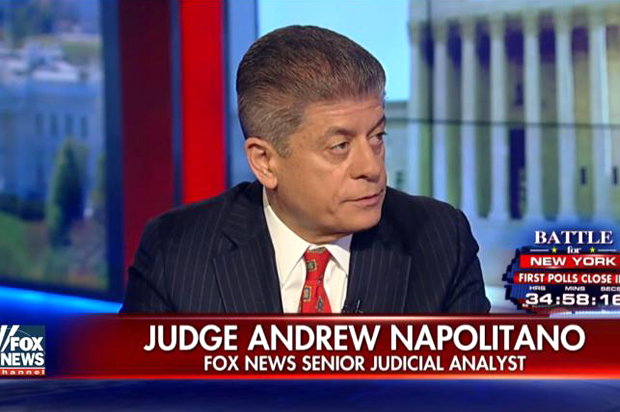 In a post on the Legal Ethics Forum, not as active as it once was but still one of the best legal ethics sites around, Legal ethicist and law professor Steve Lubet clarifies something I have always wondered about, and like a lazy slug, never investigated.

Fox News contributor Andrew Napolitano, most recently in the news for claiming that the British intelligence service GCHQ  colluded with President Obama to conduct surveillance on the Trump staff during the 2016 campaign, is always called “Judge Napolitano” during his appearances.  Lubet points out that he’s not a judge any more. Napolitano once served on the New Jersey Superior Court, but resigned in 1995 and has not held judicial office for more than two decades. It is apparently at Napolotano’s insistence that he is always addressed  as “Judge”  in Fox. His website, JudgeNap.com, refers to him as “Judge Napolitano” throughout, as does his bio on the Fox News site.

Lubet notes that The American Bar Association has held that  the use of  judicial titles by former judges practicing law is misleading and unethicalin connection with law practice.  ABA Formal Opinion 95-391 says that continued “use of the title is misleading because it may be misunderstood by the public as suggesting some type of special influence” or “to create an unjustified expectation.” In fact, said the ABA, “there appears to be no reason for such use of the title other than to create such an expectation.” Of course, Napolitano isn’t practicing law when he bloviates on Fox News, so it isn’t a Rules violation, but the Judge label is still misleading

The Ohio Rules of Professional Conduct, Lubet found,  goes further by decreeing that it is only ethical for a former judge to use the titles  “Judge” or “The Honorable” if they are preceded by the word “retired” or “former,” and the rule does not limit this caveat to ex-judges actively practicing law. Again, Napolitano is not out of compliance, because he is not subject to the Ohio Rules. That doesn’t make what he calls himself strictly accurate, or sufficiently accurate. (I confess, I have had a bias against such things ever since I suffered through a year with an insufferable  high school history teacher who called himself (and insisted that we call him)  “Dr. Arthur” because he had a PhD in history.)

This apparently really bugs Prof. Lubet, because he actually totaled up the news sources that, like Fox, call the ex-judge “Judge” and those that don’t. The Do’s: InfoWars, the Daily Caller, Breitbart, Business Insider, Real Clear Politics, the Huffington Post, the New York Daily News, CNN and the Washington Post.  Oh—and Sean Spicer. The Don’ts: The New York Times, Politico, The Hill, and others. Steve’s dislike for Napolitano and the conservative news sources ooze from his post, but I wonder: do the Do’s know that he’s not supposed to keep calling himself “Judge”? Do the Don’t’s know better, or are they just expressing their partisan contempt?

Concludes Lubet:  “Like everyone else, Napolitano is entitled to his opinion, even when trafficking in absurd conspiracy theories, but we do not need to afford him the respect of an office that he no longer holds.”

Stipulated: calling Andrew Napolitano “Judge” is like calling Phil McGraw “Dr. Phil,” except that the medical profession doesn’t seem to care about fake titles for show biz purposes (Dr. Laura and Dr. Joyce Brothers weren’t much less deceptive than Dr. Phil, just a little.) I always assumed that Judge Napolitano was an ex-judge, like Judge Wapner. Didn’t you? Do you consider yourself deceived?

I also wonder if Prof. Lubet would have bothered with his exposé if he didn’t find Napolitano’s conservative politics annoying.  I have not heard similar complaints about John Paul Stevens frequently being referred to as “Justice Stevens” rather than “Retired Justice Stevens,” for example. No question about it, Lubet is correct. I just think his indignation is magnified considerably by partisan bias.

[Full disclosure: I have always been impressed by Napolitano’s hair.]