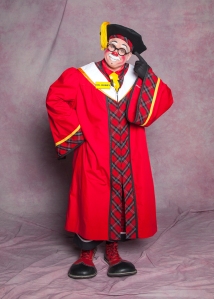 ‘Yes, I know he’s an idiot, but we should support idiots as highly paid teachers of our children, for the protection of the non-idiots…‘

Eugene Volokh is one of the best and most objective legal minds in the country. If he finds himself on the Supreme Court when Kennedy retires or Ginsberg shuffles off this mortal coil, we will not have suffered through the ugliness of the Trump years in vain. When he opines, I listen, as we all should, and he has now opined regarding the now fired idiot that I wrote about this morning, ex-University of Tampa visiting sociology professor Ken Storey.

Storey used Twitter, in the middle of the still-unfolding human disaster in Houston and soon New Orleans, to announce that flooding victims who were Trump supporters or Republicans deserved to die. He did this twice, so his later claim that his words did not intentionally convey what his words were obviously intended to convey was a desperate and obvious lie.

The university or college that fires an employee like Storey is protecting its reputation as a responsible institution, by stating in clear terms that people with terrible judgment and cruel and unethical instincts who are motivated by hate and intolerance are not qualified to teach….because they aren’t. That professors increasingly have no ethics alarms beeping when the prepare to publish sentiments like Storey’s (or worse) shows how thoroughly the leftist echo chambers of most campus faculties turn academics into Pat Robertson, which is to say, rigid, mean, and dumb. Once upon a time, liberals giggled themselves silly over the evangelical huckster’s periodic pronouncement about how a disaster was God’s way of punishing the U.S. for not abusing gays sufficiently, or similar bile, Now they do the same thing, and expect their colleagues and students to applaud.

Storey’s comments were nasty and mean-spirited; and I should note that the University of Tampa is a private university, in a state that doesn’t limit private employers’ ability to fire employees for their speech. The university’s actions thus seem legal (assuming they didn’t breach any contract). And Storey’s comments also weren’t academic or likely to be part of a serious political debate.

But the university’s action strikes me as further undermining the freedom of expression and debate at American universities, including the freedom to say things that are much more thoughtful. If you were an untenured faculty member at the University of Tampa, would you feel free to express your views on controversial subjects, when you saw how the university reacted to this tweet? Even if your views were very different politically, what do you think the University would do if people started pressuring for your dismissal, pointing to the Storey incident as precedent?

I’ve talked before about “censorship envy,” one mechanism through which these sorts of speech restrictions can grow: “If my neighbor — and especially my political adversary — gets to ban speech he reviles,” the thinking goes, “why shouldn’t I get to do the same?”

If a university has a strong policy of protecting speech, including offensive speech, administrators can point to that policy as a means of resisting calls for firing a controversial faculty member, and they can appeal to people’s desire to see speakers on their own side protected, and use that desire to help protect speakers on all sides. But once the university starts firing some people for speech “that do[es] not reflect [the university’s] community views or values,” that makes it much harder to resist calls for more suppression. Indeed, at that point tolerating speech starts implicitly conveying the message that the speech does reflect the university’s community views or values — and to avoid that implication, the university would have to fire any speaker who offended some sufficiently influential constituency.

I am very confident that in this rare case, Prof. Volokh is dead wrong. I also am confident that I know why. All the commenting professors I have read, from various positionss on the ideological scale, have consistently taken the side of less prudent, less intelligent, less rational professors who have posted outrageous things on social media, or even spouted unquestioned hate and bigotry on television or radio. Volokh’s specialty is Constitutional law, but mine is ethics, and a disqualifying conflict of interest is coming through to me loud and clear. Professors don’t want any kind of “controversial speech” (this is what Volokh inaccurately terms what Storey tweeted) being used by institutions to sever ties with an academic. Of course they don’t. Naturally they want absolute immunity from accountability for their fellow ivory tower professionals, because it also means that they have such immunity. Professors Volokh (a libertarian), and Reynolds (strongly conservative), and Turley (moderate liberal) all frequently court controversy in their own publications. It is in their interests to rally to the side of the most moronic, vicious and idiotic professor, no matter what he or she says. After all, if their moronic statements are safe, so are the statements of the less-moronic and the brilliant.

Professor Volokh’s argument is a straw man. I agree that no professor should be fired for controversial comments, or offensive comments, when the controversy or offense is reasonably based on a substantive opinion or theory that meets minimal standards of intelligence and professionalism consistent with the duties of a teacher and faculty member. “I think the United States should be run by a military dictatorship” is controversial. “I think that the Republican Party has become a nascent fascist party, and anyone who supports it is going to be supporting genocide within five years” is offensive. “Anyone who is Republican or a Trump supporter deserves to die in this storm” is just stupid. It is something a 10-year-old might say. Universities cannot find themselves charging 5 figure tuition fees while employing professors who publicly announce to the world, “I am not only hateful and bigoted, I’m also a cretin.”

A professor who behaves this way cannot be trusted. A professor who says things like this in public cannot be responsibly relied upon to teach anything but an antifa “How to be a thug” seminar, if that. No student who is conservatively inclined can or should expect fair treatment from such a teacher, and no teacher who cannot be completely trusted by a college to be fair and unbiased in class should be allowed to teach one.

A university or college has a right to self-preservation, and a duty to protect its reputation in order that alumni, graduates, and students present and future do not see their credentials and degrees reduced to the status of junk bonds. [See: University of Missouri]

Storey’s tweets were not on any “side” except the side of unthinking hatred. They weren’t articulating a political position; they were illustrating poor character and an ethics vacuum by their author. The college should have similarly fired Storey if he was wishing death on Democrats, Hillary voters, African Americans, or police officers. If he had announced that he believed that the Earth was made of hummus and humans evolved from squirrels, then doubled down on his claims when challenged, would Volokh still argue that the college was obligated to allow him to make it look like a clown school?

Well, probably he would. And that’s ridiculous.

Ex-professor Storey was is a destructive employee. His tweets harmed the institution, and would continue to until the school stated, “We don’t have teachers this cruel and stupid on our faculty.”