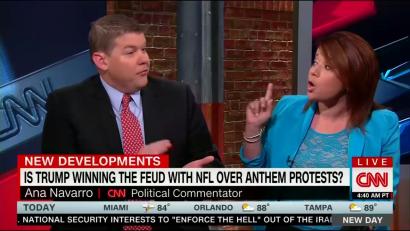 I watched this jaw-dropping exchange this morning on CNN’s New Day, unable to process what I was seeing. An alleged debate between two evidently paid CNN commentators, moderated by Alisyn Camerota, supposedly a professional broadcaster, the exchange was neither enlightening, informed or vaguely like anything the Founders could have recognized as “the press.” The level of logic and expression has been exceeded on multiple Jerry Springer episodes. The Kardashians could top it.. on a lucid day. Throughout the interminable segment, the “moderator” made no effort to control the rhetoric, correct screamingly obvious errors,or insist on decorum.

I think the best approach is to have you read it, if you can. When the transcript became available, I realized that what I had seen was even worse than I thought at the time. I was going to challenge you to pick out the most idiotic statements, but that’s too easy: closing your eyes and pointing at the screen would work. Here’s a more worthy test: see if you can identify an intelligent statement, one that wouldn’t be out of place in a bar debate between a soused kindergarten teaching assistant and truck driver recovering from a closed head injury.

But first,a word about Ana Navarro. When CNN started using her as its token conservative in studio panel discussions, I assumed it was one more example of the mainstream media stacking the deck to ensure that the liberal message prevailed by finding the lamest conservatives possible. She’s wishy-washy, inarticulate, and smug. Then Trump was nominated, and CNN found it had a Trump-hating Republican representing the Right on every issue: perfect! Navarro doesn’t even try to hide her hatred of Trump—the CNN anchors don’t try very hard, but they do a better job than Anna.

On the other hand, she not a persuasive advocate for anything, and ridiculous more often than not. As you shall see:

ALISYN CAMEROTA: Listen, I just want to be very clear. They say they’re not disrespecting the country. They say that their protest is about the treatment —

FERGUSON: Well, that’s what they say.

FERGUSON: I have the right to disagree with them. I’ll say this. I think many of the NFL players are frauds. Most of them did not go and vote in the last election, including Colin Kaepernick who’s never voted in an election — while coming out and claiming —

FERGUSON: If you’re going to be the leader of a political statement, as Colin Kaepernick was —

NAVARRO: Donald Trump’s children didn’t vote, and they are advisors in the White House!

NAVARRO: Well, fine, you criticize them for everything, but don’t tell me, then, that they don’t have a right to protest when the senior advisors in the White House didn’t vote.

FERGUSON: Colin Kaepernick comes out and says, “I’m going to lead this group.” When was the last time he went to a Black Lives Matter — the guy saw a bunch of TVs and a bunch of cameras and said, “I’m going to kneel right now, but I’m not going to back it up.”

FERGUSON: He has a right, but it also means you’re a fraud.

NAVARRO: Can I tell you something, Ben? Ben, how white of you to think that going to a Black Lives Matter rally —

FERGUSON: Again, it has nothing to do with race.

NAVARRO: Look at yourself in the mirror. What he is saying might be more significant than what — than going to one of the rallies.

FERGUSON: If I go out there every day and I champion a cause and I never do it in real life, I’m a fraud.

NAVARRO: Who died and made you the judge of blackness — to tell Colin what’s’-his-name that the fact he voted or not allows him to have a political opinion?

FERGUSON: If you go out there every day and you fight for something that you say is so near and dear to your heart, and then I find out in reality you’re never involved in the issue other than being on national TV, you’re a fraud. You’re a fraud and a fake.

NAVARRO: Ivanka Trump and Donald Trump Jr. are frauds because they didn’t vote in the Republican primaries!

FERGUSON: They should have voted in elections. I said that. You also voted for Hillary Clinton, and you say you’re a Republican, so that’s a little bit of a fraud, isn’t it?

NAVARRO: No, no, no, there’s a lot of Republicans who did.

NAVARRO: You voted for a man who was a Democrat and then an independent, and then when he was an opportunist, he became a Republican. So, really, don’t go there for me because I have been supporting Republican candidates for President probably when you were still in diapers!

FERGUSON: Again, you voted for Hillary Clinton, and you say you’re a Republican.

NAVARRO: I voted for Hillary Clinton because I refuse to vote for a racist, misogynist, even though he was a Republican nominee.

FERGUSON: And you have every right to do that.

NAVARRO: And it was the first time in my life that I did not support the Republican nominee because I found him absolutely disgusting, and I was going to put country over party! And you are nobody to question Colin Kaepernick what’s-his-name’s blackness or my Republican credentials, okay? You are not judge and or jury! You can do whatever you want for yourself — you cannot judge me — you cannot judge whether he is black enough!

FERGUSON: I can judge Colin Kaepernick. It doesn’t have anything to do with his blackness. This the weakest argument — let me finish, though —

NAVARRO: And you are black because you went to a Black Lives Matter rally!

FERGUSON: Let me finish – let me finish — again, let me finish. Colin Kaepernick coming out and saying this is a big issue to him, but he never goes out into the community and is involved in it — doesn’t even care enough about the issue which he says everyone else should care about to go register to vote and vote. That is hypocrisy — it has nothing to do with being black or white. It’s called being a hypocrite.

Still with me, or did your head explode?

The first really stupid comment comes from Camerota. The protesters are emulating, and say they are emulating, Colin Kaepernick, who said when he was making his incoherent protest,

Thus they ARE showing disrespect, and it was CNN’s anchor’s job, as moderator, to illuminate that fact for viewers, or explain why protesters appearing to do something aren’t doing what they are doing. But CNN moderators believe their job is to contradict conservatives.

Ferguson, however, immediately takes the discussion down the stupid hole, arguing that whether or not an individual should protest depends on whether they voted. Navarro is equal to the task of topping him, however, with her “Well, fine, you criticize them for everything, but don’t tell me, then, that they don’t have a right to protest when the senior advisors in the White House didn’t vote.” Huh? A. He didn’t say they didn’t have a “right.” B. If they have a right, it isn’t more or less of a right because Ivanka Trump didn’t vote…in the REPUBLICAN PRIMARIES. This is Ann, though. She reasons in rationalizations and non-sequiturs.

Then the moderator goes two for two in factually false statements. no, Alisyn, you hack, he does NOT have a right to kneel on the field. Nobody has a right to protest in their workplace, while on the job. If you were a competent journalist, you would explain that to your viewers too. But that would require you to understand it.

Next, Ana, who is on national TV to analyze the issues in an NFL controversy launched more than a year ago by Colin Kaepernick, calls him “what’s his name.” Nice. Great preparation, there, Ms. Navarro. You are paid to do this, and that’s the best you can do?

CNN pollutes the culture and political discourse by foisting garbage like this on the public as “news,” “commentary,” “analysis,” or anything but incompetence personified. How can they justify paying fools like Ferguson and Navarro, or employing flaccid hacks like Camerota? How can CNN’s reporters be indignant when they are insulted by the White House, when this is the abysmal level of broadcast news that they present to America?

These are the frauds: fake pundits and journalists like Ferguson, Navarro and Camerota. They present themselves as professions, yet have no skills, integrity, or standards.

This is why Americans don’t trust  journalists. It’s for the exact same reason they wouldn’t trust a restaurant that kept serving crap. This is why they elected an inarticulate, stream-of-semi-consciousness boob as President: that is the level of incoherent, impulsive drivel that they are given by the news networks, and told that it qualifies as meaningful. This is why political discussions on Facebook usually end up reading like a grade school playground argument.

The news media is betraying all of us, and making us dumber, more crude and less informed in the process.

20 thoughts on “THIS Is CNN. How Embarrassing…For You, Me, Ted Turner, James Madison, Gutenberg, Australopithecus, Everyone”