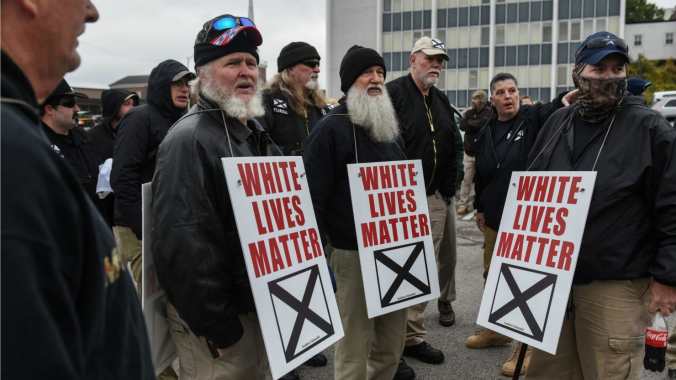 Huh. I didn’t know that ZZ Top were white supremacists!

I just know this week will be better than last week…

1. The dangers of “future news” That huge, scary rally in Washington where the nation’s capital was going to be descended-upon by all those white supremicists activated by Donald Trump’s election and rhetoric to celebrate last year’s Charlotteville riots? About two-dozen people showed up. I talked to friends in the District who said they were terrified of the rally. CNN, the networks, the Times and the Post had all headlined this major, major event, which would show just how much racism there is in America. This was fake news, straight up. It was imaginary, “future news,” a headline about what was going to happen because the mainstream news media wanted it to happen. Then they could bleat out the narrative that President Trump was inspiring racists to come out of the woodwork. Maybe someone would get killed, like in Charlottesville! Well, they could hope.

What investigation went into the determination that there was going to be a huge gathering of racists in D.C.? Clearly, not enough. 24? 24??? I could set up a rally of locals who think Gilbert and Sullivan should be taught in the schools that is five times that with some phone calls, texts and a Facebook post. It would take me a couple of hours. Yet the Times put the inevitability of this massive white supremacy rally on its front page. “After weeks of hype…” wrote the Times. Weeks of hype by the press.

It is worth mentioning that the counter-demonstration to the imaginary demonstration was many times larger than two-dozen people.

2. In related news about non-news...The Boston Globe has been contacting newspaper editorial boards and proposing a “coordinated response” to President Trump’s criticism of the news media, especially his controversial “enemy of the people” rhetoric. “We propose to publish an editorial on August 16 on the dangers of the administration’s assault on the press and ask others to commit to publishing their own editorials on the same date,” The Globe said in its pitch to fellow papers.

Talk about bad timing! We just had the explosion of the fake racist rally story. We have the Manafort trial being featured on the front page of most newspapers like it’s the O.J. trial, when  the majority of public has no idea who the man is and the trial details have nothing to do with anything newsworthy. We have the mainstream news media giving the claims of a reality show villain the kind of attention John Dean received for his Watergate testimony while it makes sure nobody knows that a Chinese spy infiltrated the staff of a powerful U.S. Senator for 20 years. Nah, the news media isn’t the enemy of the public! It just deliberately abdicates its duty to inform the public objectively , is engaged in a coordinated effort to bring down an elected President, has abused its First Amendment-bestowed immunity from the consequences of its conduct, and is working to divide the nation to the point where it cannot function. That’s all. None of this is good for the people or the nation, but that doesn’t make those intentionally harming both enemies, exactly….although off the top of my head,  I can’t think of a more accurate word for it.

I know this position infuriates many people, and indeed has cost Ethics Alarms readers and friends, but what the hell: an ethicist who won’t tell the truth out of fear isn’t very ethical. The American news media has been conning itself through the rationalization of Self-validating Virtue, #14 on the Ethics Alarms list. A free press is at the foundation of our democratic principles, so journalism is by definition good. It it were not good, it would not be protected as an absolute by the legacy of the Founders. Thus, reason the journalists, whatever they decide is the right thing to do must be good, because they, the Good, have decided to do it. It also follows that whoever and whatever they oppose, or that oppose the Good, are not good, but rather enemies of the Good.

This is, of course, a logical fallacy, a rationalization and circular logic, but that is not only what drives most of today’s journalists’ certitude, it also misleads their defenders and supporters. But blinded by this fallacy, journalists are openly abusing their First Amendment privilege, and using it to harm the culture, the public, the political system, our institutions—including their own!— and the nation itself. I think it is obvious that those who are actively inflicting such harm on the nation qualify as enemies of the people. I would prefer that the President of the United States not have to declare that the case, but the power of the news media almost makes him the only one who can counter their abuses. The news media cannot be trusted. That is a fact that the media itself will not accept or reveal–The Self-Anointed Trustworthy  cannot be untrustworthy!—but it is crucial that the public be told.

The Globe’s coordinated attack will only prove the news media’s bias, while exacerbating the divisiveness and partisan anger that it has been cultivating since 2008 and before.

3. Also, I hear Senator Feinstein just fired the staffer who hired the Chinese spy she learned about five years ago…From the Washington Post:

“The FBI has fired Agent Peter Strzok, who helped lead the bureau’s investigation into Russian interference in the 2016 election until officials discovered he had been sending anti-Trump texts. Aitan Goelman, Strzok’s lawyer, said FBI Deputy Director David L. Bowdich ordered the firing on Friday — even though the director of the FBI office that normally handles employee discipline had decided Strzok should face only a demotion and 60-day suspension.”

The fact that his firing took this long undermined the latter further.

He got away with it because the entire culture at Justice was (is?) biased.

(I was just kidding about the Feinstein thing.)

4. Here are the results of yesterday’s polls regarding the news blackout on her Chinese mole. Note that two out of 113 polled said that they knew about the story through mainstream media reporting, and that not one of 153 voters agreed with Feinstein’s assessment—and most of the news media, apparently, that a Chinese spy serving on her staff and as her driver was “no big deal,”