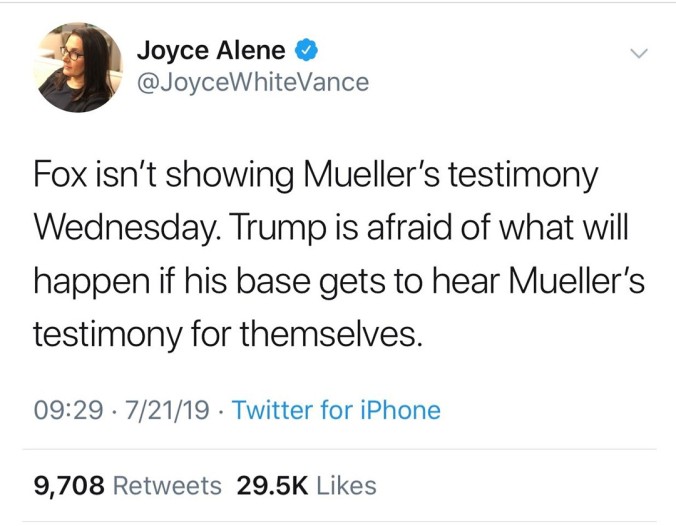 First, MSNBC legal analyst Joyce Alene Vance sends out the completely false tweet above. Of course Fox News covered the hearing. Why would she do that? Is it because she works for all all-anti-Trump-spin all the time network? Or is it because she’s a hard core partisan, having been an Obama U.S. Attorney? Maybe its because she’s not a journalist, and has no idea what kind of standards journalists are supposed to use before reporting “news.” Then again, virtually nobody at MSNBC appears to know what ethical journalism is.

Whatever the reason, she tweeted it, and immediately confirmation bias set in, with such sophisticated political analysts as horror novelist and well-established Trump-hater Stephen King helping to spread the word–three “words,” really: Fox won’t report news unfavorable to Trump, Trump is afraid of the Mueller Report (never mind that anyone’s been able to read it for months) and that Mueller’s testimony was going to be a likely calamity for the President—to his more than 5 million followers.  [NOTE: It wasn’t. It was a calamity for “the resistance” and Robert Mueller’s reputation]

Funny, neither the Vance tweet nor King’s are available any more. I wonder why? Yet both were retweeted many thousands of times, and Los Angeles Times columnist David Lazarus, MSNBC contributer Rick Wilson, former Rep. Donna Edwards and others repeated the fake news in interviews.

It is especially irritating  that Prof. Jonathan Turley, who says that he knows and admires Vance (they are both law professors), made excuses for her in his post about the episode. The usually more ethically astute law professor wrote,

[P] eople are going overboard in their attacks on Vance. Everyone has tweets that they wish they could take back, including the President of the United States. Vance did the right thing in pulling the tweet.

Ugh. No, they are not going overboard, at all. She speaks for a news network, and her tweets are the equivalent of news reports. This one wasn’t just a “mistake,” it was gross journalism malpractice. She also understands how Twitter works, and the obligation not to put false facts into the hands of the foaming-at-the-mouth Trump-Deranged who scour the news for anything that will slake their unreasoning hatred.  Turley also doesn’t mention her outrageous “apology”:

What?  What does she mean, “intended ironically”? So complete lies are now acceptable as irony? Her apology is arguably worse than the original tweet.  How can anyone trust a source who claims that she intentionally misleads people to be “ironic”?

Turley, meanwhile, sinks to hack level by using the President’s irresponsible tweeting habits as a justification for Vance. The President isn’t a journalist, and by this time, anyone who takes his tweets as credible fact deserves to be misled, or as Vance would say, “confused.”

Furthermore, Turley is appealing to  pure rationalizations to excuse unethical conduct: #1.The Golden Rationalization, or “Everybody does it”; #2. Ethics Estoppel, or “They’re Just as Bad”; 11. (a) “I deserve this!” or “Just this once!”;  #19. The Perfection Diversion: “Nobody’s Perfect!” or “Everybody makes mistakes!”: and most absurdly of all, # 32. The Unethical Role Model: “He/She would have done the same thing.” The latter is a terrible rationalization when the role model whose unethical; conduct is being used as justifying precedent is Abraham Lincoln, but Donald Trump??

So now we know that Professor Turley is not above using double standards to help his friends, even at the cost of misleading his readers.

Good to know. But disappointing.