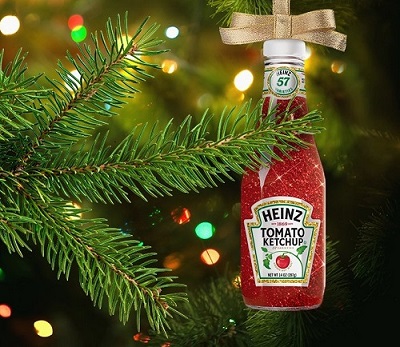 So far, this pre-Christmas slog has been especially horrible.

This post started out as yesterday’s potpourri, and I was interrupted just as I was about to post it. So now its a two-day edition.

1. The IG’s report embraces Hanlon’s Razor. What the report on the FBI investigation of the Trump campaign’s alleged “collusion” says is that he Inspector General could find no documentation of a “conspiracy” or bias against the President, but that the FBI’s conduct was remarkably inept throughout. Hanlon Razor: “Never attribute to malice that which can be adequately explained by stupidity.”

When the AG says that the FBI handling of the investigation raises questions about how it conducts itself in more routine matters, isn’t the obvious next step to find out? If the evidence shows that the FBI doesn’t make such “mistakes” normally, only in a situation—the investigation of a Presidential candidate from the party opposite from the one currently represented in the White House—where one would assume special care would be applied, what would that tell us? One of the AG’s revelations is that “an F.B.I. official who had to sign an affidavit attesting to the accuracy and completeness of a court filing had specifically asked about any relationship with the C.I.A. Mr. Clinesmith altered the email so that it stated that Mr. Page was “not a source,” contributing to the Justice Department’s failure to discuss his relationship with the C.I.A. in a renewal application.”

That’s interesting. And why did he lie? Just “sloppiness”? At some point, repeated errors begin suggesting bias and intent.

It is astounding that James Comey is crowing in the media about the report, when the agency he led showed itself to be thoroughly incompetent at the exact moment when trust and care were most essential. He should hide his head in a bag, as Justice Scalia liked to say.

2. Ann Althouse reads Jamelle Bouie so I don’t have to. Thanks, Ann! After making Bouie an Ethics Dunce numerous times and finding him to be biased, anti-white fool who had no business being published in any fair and responsible conversation, I stopped reading him. Fortunately, Ann Althouse has a stronger stomach than I do, and pointed readers to “Two Articles of Impeachment for Trump Are Nowhere Near Enough/The House should take its own sweet time and investigate many more aspects of the president’s perfidious behavior,”  where he openly analyzes the Democratic impeachment follies as tactic to affect the 2020 election, and, ethics-challenged that he is, endorses that clear abuse of the Constitution, writing in part,

Democrats, in other words, can use the power of impeachment to set the terms of the next election — to shape the national political landscape in their favor. In a political culture governed by negative partisanship and hyperpolarization, restraint won’t save the Democratic majority. But a relentless anti-Trump posture — including comprehensive investigations and additional articles of impeachment — might just do the trick.

Ann responds, “Does he not hear what he is saying?! He’s telling Democrats to drop the pretense of principle and patriotism and go all out for political advantage.”

3. Benefit of the doubt! That’s rich. The New England Patriots are again implicated in a cheating controversy. I have no read several commentaries, mostly from Boston source, arguing that the team “deserves the benefit of the doubt.”

This is the most unethical, untrustworthy, win-at-all-costs team in a sports league that has no problem crippling young athletes for profit. Sure, it should be proven guilty on facts, not presumption, but a history of being deceptive and breaking rules at very least removes the “How can anyone think we would do such a thing?” factor.

4. Top stories? Below are the results of a poll that tried to determine what the public considered the “top stories” of 2019 according to the proportion of those polled who “heard a lot about” each, by party affiliation. 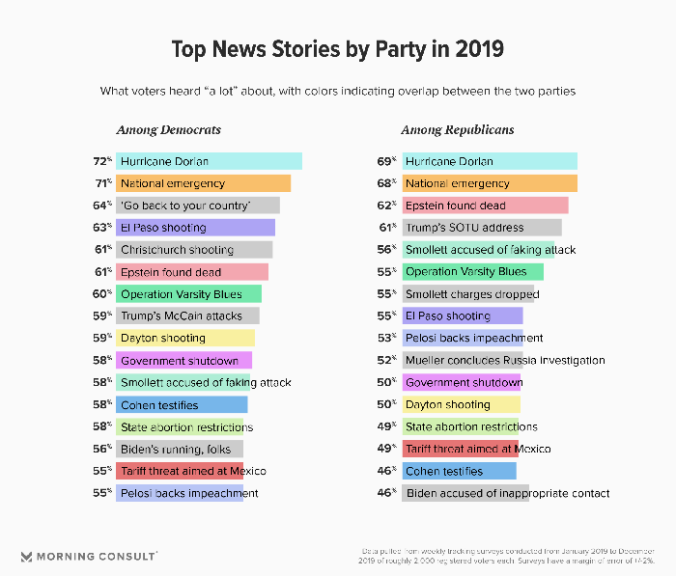 5.  This is propaganda, not news reporting. Time Magazine, which admittedly is an animated journalistic corpse these days, still makes headlines with its choice of its “Person of the Year,” but that nostalgic notice won’t last much longer with selections like this year’s honoree:  teenage climate change scold Greta Thunberg. The choice is dishonest, manipulative, and absurd. Her impact has been nil; her expertise is imaginary; her cause is futile, and her rhetoric is insulting and hysterical. Few Americans know her name, and the number is still higher than it should be.

Of course, the idiocy of Time’s choice doesn’t excuse President Trump’s gratuitous tweet mocking her and the selection. This is beneath him, or should be. I grasp his logic: since the mainstream media will treat the ridiculous choice with reverence, being all-in on climate change hysteria, so he has to publicize the truth. Sometimes that logic is valid, but not when it comes to punching down at a manipulated and exploited child, which is what Thunberg is.

6. Oh, heck, I’m in a bad mood, so I might as well show up Snopes again… Jenna Ellis, senior White House legal counsel, tweeted out a Babylon Bee satirical story that began with a fake announcement froim House Democrats: “We have found Trump guilty of absolutely nothing, but we already started this whole process and it would look bad to back out now, so here we are.'” She added several laughing emojis, just in case anyone was so dim-witted that they couldn’t figure out that the story was a joke, like everything else the Bee publishes. President Trump then retweeted Ellis, because he wants to establish behaving like a 13-year old as normal Presidential behavior.

Then Snopes reporter Dan Evon, the same reporter who has previously “fact-checked” the satire site, sent the White House this inquiry:

“President Trump recently retweeted a post from @JennaEllisEsq containing a fake quote from an entertainment article. Was President Trump aware that this quote was fake when he sent it? If so, why wasn’t it accompanied by a message labeling the quote as fiction?”

Conclusion (which Ethics Alarms reached long ago): People this partisan, biased and stupid cannot be trusted to factcheck anything.

7. And this doesn’t put me in a better mood: It is reported that an Oklahoma City University School of Law student was expelled for posting  the dreaded “It’s OK to be White”  flyers on the door and exterior of the law school building. The schools cover story is that he wasn’t expelled for the content of the flyers, but because posting them violated the terms of a suspension he was serving.

Sure. Even if this is correct, the action looks looks like censorship, and chills speech. Police “didn’t find evidence of a crime,” and the student “was found to be non-threatening to campus safety,” nor was he trespassing.”

The dean of the law school, Jim Roth, had issued a statment to students and faculty the day the flyers were found, saying, “Despite what the intentions of that message may have been, the message reminds me of one fact that I know our community embraces — it’s okay to be EVERYBODY. Exclusion and hate will not be tolerated here. You are accepted at OCU Law no matter how you pray, what you look like, or who you love. And you always will be.” How did the flyers justify that declaration?

East Tennessee State promised to prosecute its “It’s OK to be white” pranksters, an action that is unquestionably unconstitutional.

Someone should really start posting”It’s OK to Be Black” flyers around campuses and put these schools to an integrity test.

8. Hmmmm…Last night it was reported that Harvey Weinstein had reached a $25 million dollar settlements deal with his various accusers that won’t come out of the serial harrasser/predator’s pocket, but rather his company’s insurance carrier.

Since a condition of the deal undoubtedly precluded the victims from testifying against him in any trial, it seems that this removes a substantial, and perhaps decisive, number of witnesses from any criminal prosecutions of Weinstein. Last night, a very astute lawyer with strong ethics credentials suggested that Weinstein’s lawyers may have a serious problem: Doesn’t the deal have the effect of interfering with the justice system by paying off witnesses not to testify? That’s a crime, and lawyers can’t aid and abet crimes.

In other news, Hillary’s pal had his bail increased because he tried to mess with his ankle monitoring device.

9. Nah, there is no anti-Trump bias at the FBI! Or ar CNN and MSNBC! From the hearing on the IG’s report: Department of Justice Inspector General Michael Horowitz was asked by Sen. Josh Hawley (R-Mo.) yesterday, “What about the case agent who directly misled the DOJ, an Office of Intelligence attorney, about Carter Page’s relationship with other intelligence agencies in our government, who directly misled the OI about that, is that person to your knowledge still at the FBI?”

“To my knowledge, that person is still there,” Horowitz replied.

“Why are they still there?” Hawley asked.