In Billy Rose’s spectacular musical “Jumbo,” Jimmy Durante was confronted by a sheriff as Jimmy tries to tiptoe off with the largest elephant in captivity trailing on a rope behind him. In answer to the officer’s question, “Where are you going with that elephant?”,  the immortal Schnoz answered, innocently, “Elephant? What elephant?”

Sadly, “Jumbo” will never be produced again: too old, too expensive, too politically incorrect (it’s about the traditional circuses that had trained animals, like elephants, in their shows). Nonetheless, Jimmy’s tradition is alive and well, if you can call denying what is obvious to anyone “well.”

In Des Moines, Iowa, William Stark has painted Confederate battle flags and swastikas on pallets around his property, which is next to an elementary school. Nice. Morris Elementary has released a statement denouncing Stark’s display, which the students, who are about 60% black and Hispanic, can see when they come and go from the school, and from the playground.

I wonder what history he’s referring to.

Stark denies that there’s anything about his Nazi-Confederacy display that suggests racism, thus entering “Racism? What racism?” into the Ethics Alarms Jumbo log.

Here’s Willy and his “non-racist” artwork: 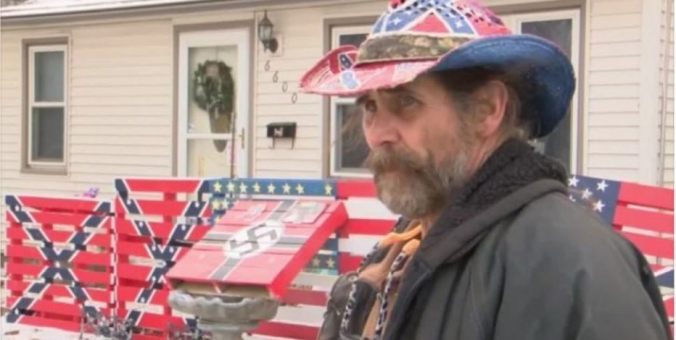 He does have a Christmas wreath on his door, however….

11 thoughts on “A Holiday Jumbo! The Non-Racist Confederacy/Nazi Enthusiast”