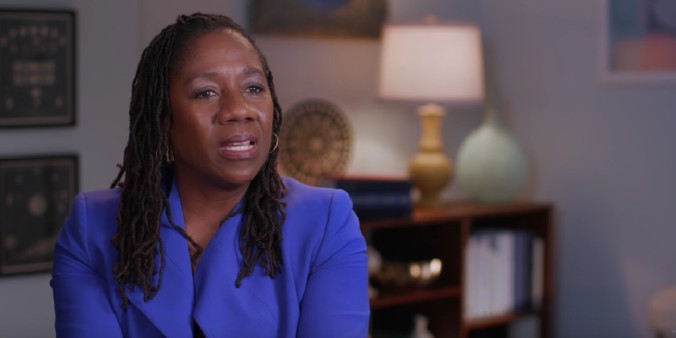 I don’t understand why this story should even be news, but the fact that it was treated as news, and worse, promoted as news by an NAACP official, is significant , disturbing, but, sadly, not at all surprising.

Sherrilyn Ifill,  the president and director of the NAACP Legal Defense and Educational Fund in New York, was returning to Baltimore from New York on Amtrak last week  as she often does. She was sitting in a general-admission area of a largely empty passenger car when a female junior conductor asked her to leave her seat and move into another car  because she had “other people coming who she wants to give this seat.”

Now as it happens, I was once asked to move to another Amtrak car. I had no idea why, but assumed there was a good reason, and the inconvenience was negligible.  Maybe a large group was getting on at the next stop. It was, simply, not a big deal. I’ve been asked to change seats on airlines, too, sometimes with an explanation, sometimes not.

But then, I’m not a high official with a civil rights advocacy organization with an interest in exacerbating racial disharmony in order to sat in business. . Ifill tweeted, “When I was laying [the junior conductor] out to the conductor, at one point, I said, ‘I can sit where I want,’ and I thought, ‘This isn’t 1950.”

Ah-HA! She had been ordered to the back of the bus because she was black!

“What unfolded in the pages of Ifill’s Twitter account was a sometimes irate description of an incident that is evoking memories of just the kinds of civil rights violations she has spent her career fighting, all as Martin Luther King Jr. Day weekend — a time she calls “sacred” — was getting under way,” wrote Jonathan Pitts of the Baltimore Sun.

Jumping on the opportunity to be a martyr and allow activists to show that little has changed in America since Rosa took her stand, Ifill protested to Amtrack and made them grovel.  As Ifill attacked Amtrak on twitter—imagine, this was on Martin Luther King weekend!—an Amtrak spokesman told The Baltimore Sun that the company tried “numerous times” to reach out to Ifill directly and apologized to her upon finally reaching her. “We should have responded publicly sooner, and we apologized for the incident and our slow response,” he wrote. “Amtrak is looking into the matter more closely so that we can prevent situations like this going forward.”

I rank this as a “Do you know who I am?” episode, opportunistic race-baiting and unethical, indeed cruel, behavior by Ifill. Does anyone seriously think that on Amtrak, in 2020, an employee would order a passenger out of her seat because she was black? If a white passenger, like me, had been treated exactly the same way, I might have been irate, and I might have demanded an explanation, but I wouldn’t pull the Rosa Parks card. This not just the “presumption of racism,” but a contrived and cynical one. What Ifill’s grandstanding aims at is the opposite of racial and social equality: tell a white passenger to move, but don’t dare treat the a black passenger the same way, or you and your employer will be labelled racists.

In order to get her cheap victim status, Ifill is happy to get a woman fired for the crime of not being sufficiently sensitive to race-baiting gotchas.

Her behavior doesn’t help American racial trust and comity one bit, and the worst part is, it is not intended to.

One thought on “The Ethics Mess That Is US Race Relations, Chapter II: Playing Rosa Parks”