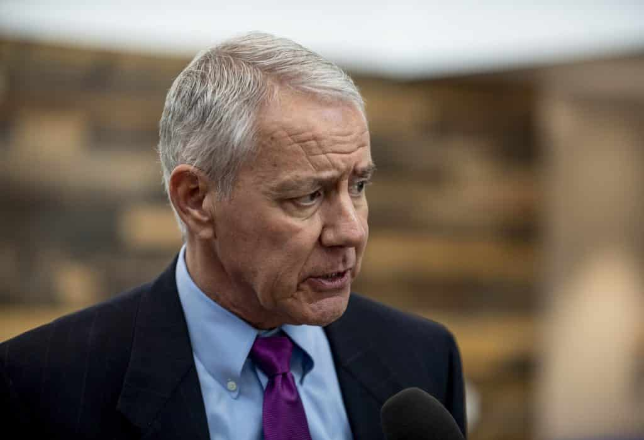 I know there are a lot of members of Congress who are frighteningly devoid of ethics, but this story, involving  the GOP’s Ken Buck, who is also Colorado Republican Party Chair , is revolting. He needs to be sanctioned, removed from office, disbarred as a lawyer, and repudiated by his party and his constituents. What he did is no better than taking bribes.

At issue is the Republican primary for the District 10 seat currently held by Sen. Owen Hill, who’s term-limited. State Rep. Larry Liston and GOP activist David Stiver were on the ballot.  Liston received 75% of the vote and Stiver just 24%, according to documents filed later in Denver District Court. The law states that to qualify for the November ballot  a candidate must receive at least 30% of the vote from Republicans within the district.

But Stiver complained the election was unfair, and the issue was taken up with the state central committee, which consists of nearly 500 members, including elected officials and county officers. In an April 17 conference call with less than half on the line, the group voted to place Stiver on the ballot for the seat, even though he failed to receive 30% of the district’s votes. The problem with this is that doing so would violate the law.

Nevertheless, after the vote, Buck asked  Eli Bremer, the GOP chairman for state Senate District 10, to submit incorrect election results to get Stiver on the primary ballot for a state Senate seat. The phone call in which this was discussed was recorded.

Bremer refused, and went to The Denver Post to explain what happened.“You’ve got a sitting congressman, a sitting state party chair, who is trying to bully a volunteer — I’m a volunteer; I don’t get paid for this — into committing a crime,” he said. “To say it’s damning is an understatement.”

Rep. Buck protests that he was merely asking Bremer to abide by a committee decision. This is yet another use of the recently viral Rationalization #64. Yoo’s Rationalization or “It isn’t what it is.”

As usual, using this one assumes that listeners are either so blind, stupid or corrupt that they won’t reject it out of hand. “No,”Buck says. “I wasn’t asking Bremer to break the law. How dare anyone accuse me of such a thing? I’m outraged! I’m insulted! I was merely asking Bremer to abide by a committee decision…TO BREAK THE LAW.”

This scum is sitting in the U.S. Congress

“Do you understand the order of the executive committee and the central committee that you will submit the paperwork to include Mr. Stiver and Mr. Liston on the ballot, with Mr. Liston receiving the top-line vote?” Buck said on the call with Bremer.

Bremer replied., “Uh, yes, sir, I understand the central committee has adopted a resolution that requires me to sign a false affidavit to the state.”

Lawyers who sign false affidavits or who counsel others to do so are subject to professional sanctions.

“I will seek legal counsel as I am being asked to sign an affidavit that states Mr. Stiver received 30% of the vote. I need to seek legal counsel to find out if I am putting myself in jeopardy of a misdemeanor for doing that,” Bremer said. (I’m not licensed to practice in Colorado, Mr. Bremer, but you don’t need a lawyer to answer that question. Let’s see...I think I’ll answer it as someone with a functioning brain: Of course you would be putting yourself in jeopardy of committing a misdemeanor for doing that! You shouldn’t have to ask.

Buck pressed on, saying, “And you understand that it is the order of the central committee that you do so?”

Bremer: “I will consult with counsel. Yes, sir, I understand the central committee has ordered me to sign an affidavit stating that a candidate got 30% who did not. And I will seek legal counsel and determine if I am legally able to follow that.”

Ken Buck is a lawyer, a former DA, in fact,yet he thought  deceitful double-talk was sufficient to weasel out of an obvious effort to induce another to commit a crime. “What I was asking Eli to do was not to commit fraud, I was asking Eli if he understood the decision of the central committee and if he was willing to follow the request of the Republican central committee. It wasn’t like I was asking him to do something because I have a personal stake in the process.”

Let’s see where Ken Buck went to law school… Ah! The University of Wyoming College of Law! Is there any course there that teaches that violating the law and committing a fraud on the public doesn’t count if the architect of the fraud doesn’t “have a personal stake in the process”? I don’t think so.

“We have two choices,” Buck continued. “We’re going to allow an unfair election to stand, or we’re going to require the chairman of the Senate district to put the candidate’s name on the ballot and let the primary voters decide.”

No, you blot on society, you have ONE choice. Follow the law.

Bremer never filed the paperwork as Buck had insisted. He persuaded his vice chair to filed a “friendly lawsuit” to prevent him from doing so.  District Court Chief Judge Michael Martinez ruled Monday that any certificate of designation filed with the Secretary of State’s Office showing Stiver as a candidate would violate state law because he did not receive at least 30% of the district’s votes.

The state Republican Party then proved that it is corrupt to the core by appealing the case to the Colorado Supreme Court, which allowed the lower court’s no-brainer of a decision stand.

University of Denver politics expert Seth Masket was as shocked as I am. “There are plenty of examples within Colorado and elsewhere of party leaders pressuring subordinates to sort of fudge results or to change their views on things, but it’s very rare you see someone directly ordering someone to commit a crime,” Masket said.

Joe Webb, former chair of the Jefferson County Republican Party, added, “Eli was being asked, and this is very serious, to attest to something as true when he knew it was false.There’s a word for that in the legal jargon; it’s called perjury.”

“How in the heck is the Republican Party going to go out and say we’re for the rule of law except when it applies to us — we can do whatever we want to?” Bremer said. “That’s not my Republican Party.”

Ohhhhhhhh yes it is!

Now what are you going to do about it?

26 thoughts on “There Is No Ethics Alarms Category Sufficiently Derogatory To Describe The Corrupt Conduct, Reasoning And Statements Of Congressman Ken Buck (R-Colorado)”