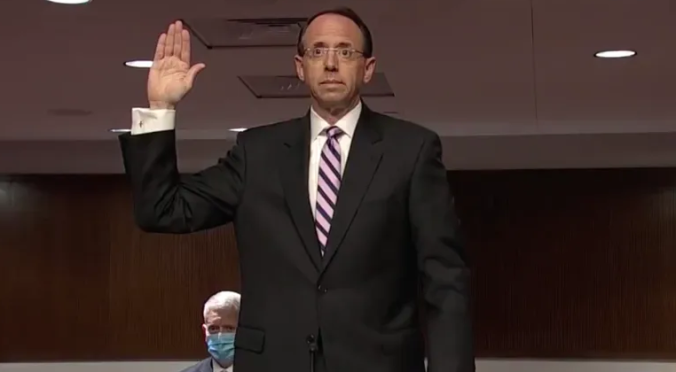 Professor Jonathan Turley, a trustworthy analyst, one of the few, just posted his summary of former Deputy Attorney General Rod Rosenstein’s testimony today before the Senate Judiciary Committee. Despicably, Democrats had attacked the hearings as if there was no reason to be troubled about the way the investigation of “Russian collusion” was handled despite a mountain of evidence indicating that it was biased, motivated by partisanship, and quite probably illegal. Rosenstein’s testimony, as Turley points out, demonstrated how disingenuous that partisan complaint was. He writes, “Rosenstein said that there is a legitimate question of ‘why it happened?’ That would seem to support the hearing that Democrats are denouncing. ”

Why yes, that seems to be a fair assessment.

I recommend reading Turley’s spin-free account because it is unlikely that the mainstream news media will adequately cover the hearing, since that would interfere with cheerleading  and rationalizing the riots.

Is that overly harsh? I don’t think so. Even the sometimes infuriatingly diplomatic professor is showing signs of losing patience at the constant, shameless efforts to bury the truth. I passed the stage he is reaching now a few years ago.

Some highlights and lowlights:

That’s beneath contempt, almost “Have you no decency?” level politics.

She just prompted Rosenstein to say that he agreed with the view that there was no evidence of obstruction of justice. She then dug deeper and Rosenstein just said that “he agrees that there was no evidence of a crime” by Trump. Hirono continued to dig deeper. She pressed Rosenstein on how a 1000 prosecutors disagreed with him. Rosenstein just said “we have a lot more than 1000 former prosecutors.” He said that while they did not know the full record, he did. Hirono cut him off again. Rosenstein said it was unfair. “Nobody was in favor of prosecution.”

Turley concludes, “The most damaging testimony against the Justice Department came from the questioning by Sen. Hirono who is proof of the long-standing rule in litigation to avoid questions that you do not know the answer to.”

This, I will continue to note until I rot, was the “Kool-Aid” I was accused of drinking by enabling partisans on Ethics Alarms, now happily zoning out on MSNBC.

Do read the the whole thing. Turley is an underappreciated objective and ethical contributor to public understanding in the midst of news media disinformation.

He also has a lot of typos, which makes me feel better.