The museum’s powerful chairman of European paintings, Keith Christiansen, who has worked at the Met for 53 years, posted this image on Instagram. It depicts Alexandre Lenoir, who tried to save monuments during the French Revolution. 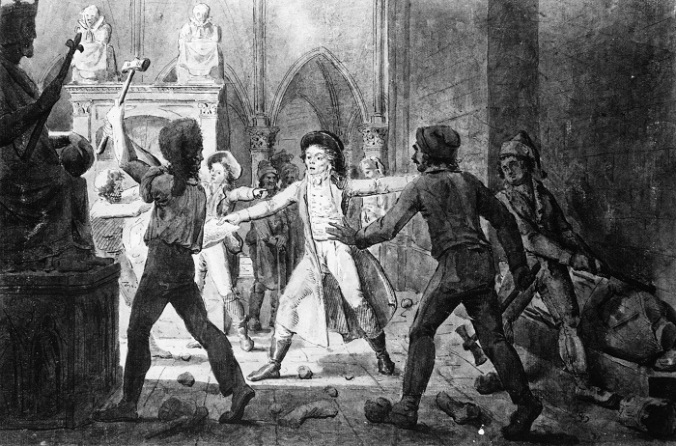 “Alexandre Lenoir battling the revolutionary zealots bent on destroying the royal tombs in Saint Denis. How many great works of art have been lost to the desire to rid ourselves of a past of which we don’t approve. And how grateful we are to people like Lenoir, who realized that their value — both artistic and historical — extended beyond a defining moment of social and political upheaval and change.”

The statement was entirely appropriate and true.

But as we know, Facts Don’t Matter.

The post was quickly attacked  in a tweet by the advocacy group of arts workers, Art + Museum Transparency: “Dear @metmuseum, one of your most powerful curators suggested that it’s a shame we’re trying to ‘rid ourselves of a past of which we don’t approve’ by removing monuments — and, worse, making a dog whistle of an equation of #BLM activists with ‘revolutionary zealots.’ This is not OK.”

Here is how Hawk Newsome, the president of Greater New York Black Lives Matter, described the movement in an interview with Martha MacCallum on Fox News, as reported by the NY Post:

“If this country doesn’t give us what we want, then we will burn down this system and replace it. All right? And I could be speaking figuratively. I could be speaking literally. It’s a matter of interpretation… Let’s be very real…. What is this country rewarding? What behavior is it listening to? Obviously not marching. But when people get aggressive and they escalate their protests, cops get fired, Republican politicians talking about police reform… Wow, it’s interesting that you would [ask what Black Lives Matter hoped to achieve through violence] because this country is built upon violence. What was the American Revolution? What’s our diplomacy across the globe? We go in and we blow up countries and we replace their leaders with leaders who we like. So for any American to accuse us of being violent is extremely hypocritical….. I think you should be applauding me, seeing how you guys are huge supporters of the Second Amendment….. But it seems to be the hypocrisy of America that when black people start talking about arming themselves and defending themselves, [that] talk is ‘violent.’ But when white people grab assault rifles and go to our nation’s, their state capitals, it’s all good… I just want black liberation, and black sovereignty. By any means necessary.”

Funny, that sure sounds like revolutionary zealotry to me.

The institutional capitulation and abandonment of principle:

Max Hollein, the Met’s director, apologized directly to the European paintings department in an email, calling the Instagram post “not only not appropriate and misguided in its judgment but simply wrong.”

How was the statement “wrong” in any way?

Hollein later said in a statement to The Times:

“There is no doubt that the Met and its development is also connected with a logic of what is defined as white supremacy. Our ongoing efforts to not only diversify our collection but also our programs, narratives, contexts and staff will be further accelerated and will benefit in urgency and impact from this time.”

The retreat and grovel:

“I will make no excuses except to say that I had in mind one thing and lacked the awareness to self-reflect on how my post could go in a very different direction, on a very important day … and would cause further hurt to those experiencing so much pain right now,. I want to be clear on my view that monuments of those who promoted racist ideologies and systems should never be glorified or in a location where they can cause further harm.”