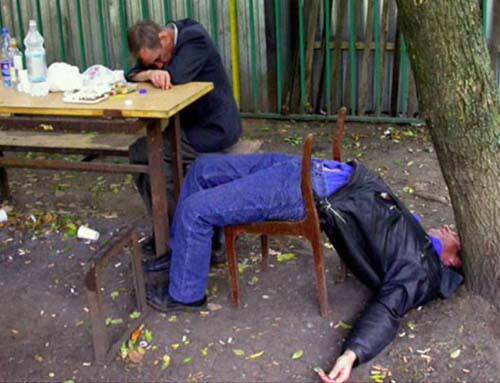 Except it’s not alcohol, it’s all the anti-America agitprop that has me groggy…

1. One last Fourth of July resource: here is one of many annotated versions of the Declaration. Here is another.

2. The downside of paying baseball players so much. Major League Baseball is plunging forward with a season of sorts, only 60 games long and with some hopefully temporary rules, such as a universal Designated Hitter and an extra-inning stunt so revolting that I don’t even want to think about it. The players are getting a pro-rated salary, but the Players Union insisted that any player could opt out of the season for a legitimate health related reason, such as being at in a  high risk group, and collect his salary, or for ny reason, and waive his salary.

It has been fascinating to see some players decide to not play, thus leaving their teams in the lurch, because its just not worth the effort. Take, for example, Dodgers starting pitcher, fresh off of a trade by the Red Sox. He announced that he won’t be playing, and will forfeit 11 million dollars (of his usual 30 million dollar a year salary)for the privilege. Felix Hernandez, another former ace now with the Braves, also opted out, though he loses far less, since he was working on a minor league contract while trying to keep his recently declining career going. In both cases, however, the pitchers are taking a major risk, because sitting out a full season for older players often makes returning to action difficult. In addition, especially in the case of Price and some of the other opt-outs, the decision not to play harms his team and team mates. But David Price has earned about 250 million dollars in his career, and will earn another 50 million whether can pitch or not. Hernandez has already earned more than 200 million.

Love of the game? For the good of the team? Never mind. The players are motivated only by money, and once enough is in stocks and bonds, even that isn’t motivation enough.

3. Surprise! It turns out that police are necessary after all.  Any hope that a reasonable and practical answer to Question 13 (“What is the “systemic reform regarding race in America” that the George Floyd protests purport to be seeking?”) vanished when the first substantive measure embraced by the mob was “Defund the police.” That this was even floated, much less executed (as in Minneaplois and New York City) was signature significance for a level if ignorance and recklessness justifying this standard Ethics Alarms clip:

The CHAZ saga [in Seattle] began on June 8, under the premise that capitalism, police brutality, and the “fascist regime” of Seattle mayor Jenny Durkan were upholding a social order that systemically oppressed African-Americans. Black Lives Matter and Antifa-affiliated activists hoped to create a new regime based on familiar social-justice principles of recent years: they established a social order based on a “reverse hierarchy of oppression,” implemented race-based segregation in public spaces, and maintained a “police-free zone” that they believed would protect “people of color” from the depredations of the state….

Ultimately, the problem of violence–and a dangerously naive understanding of policing–doomed the CHAZ. Over its 24-day history, the autonomous zone saw two gun homicides and four additional shooting victims. All the identified victims were black men–precisely the demographic for whom the CHAZ had claimed to offer protection. In the absence of a legitimate police force, armed criminal gangs and untrained anarchist paramilitaries filled the void. Almost every night, gunshots rang through the streets. The first homicide victim was killed in an outburst of gang violence; the second, reportedly unarmed and joyriding in a stolen car, was gunned down by the “CHAZ security force.”

In the end, the homicide rate in the CHAZ turned out to be 1,216 per 100,000–nearly 50 times greater than Chicago’s. Though that’s obviously not a strict apples-to-apples comparison–the small sample size of the CHAZ creates an exaggerated statistical effect–it’s instructive nonetheless, as it invalidates the entire premise of the autonomous zone. By instituting a “police-free zone,” the CHAZ didn’t become peaceable; it became lawless, brutish, and violent.

…as anyone not in the grip of crippling ideological fantasies could have predicted.

4. In another shock, Michael Cohen broke the conditions of his release from jail. Ethics Alarms first flagged former Trump fixer Michael Cohen in 2015, writing, “Seldom do we see any lawyer befoul the image and dignity of his profession like Michael Cohen, Esquire, one of Donald Trump’s lawyers, did yesterday.” Nothing that Cohen has done since then came as the least surprise, but this is blatant even for him.

Cohen, 53, is supposed to be serving a three-year sentence for various crimes that include tax evasion, bank fraud and lying to Congress. The federal Bureau of Prisons released him as a safety measure  due to the epidemic on May 20, but is still confined to house arrest.

Yet the New York Post photographed him last week,dining out at a sidewalk table outside Le Bilboquet, a French restaurant around the corner from his Park Avenue apartment. Even though his lawyer is spinning like crazy to try to explain it, it is likely that Cohen can’t even be a prisoner ethically.

5. Change.org, presenting the ugly underbelly of American historical ignorance. Incredibly enough, this is not from The Babylon Bee. The argument presented for “canceling” Christopher Columbus below is only slightly more cretinous than those offered to topple statues to Lincoln, Washington and Jefferson. [Vandals—not “protesters”—in Baltimore toppled a statue of Christopher Columbus and threw it into the Inner Harbor,  WBAL reported. Not surpisingly, the racially biased Baltimore government did nothing to stop the mob] In particular, I am amused by the implication that deservedly honored historical figures should have been admirable human beings in addition to their accomplishments. High achievers, including leaders, are often dis-likable people, and frequently awful human beings. Whether Columbus was a saint or a villain, he is honored for having the foresight and courage to set out across the ocean and begin the process of the European migration to the New World that altered civilization, thought, science, commerce–just about everything. The dewy-eyed sentimentalists who blame Columbus for the inevitable disruption of native populations are committed to a fantasy, and if they think the world would be better off if Native Americans still hunted buffalo on the plains, they are too naive to be permitted outside without a leash. Discovery and human progress is, and necessarily is, ugly, violent, and cruel to an unavoidable extent. Western civilization is indebted to Columbus, and it is the beneficiaries of Western civilization who should honor him, not, as the hilarious petition below seems to think, merely Italians. 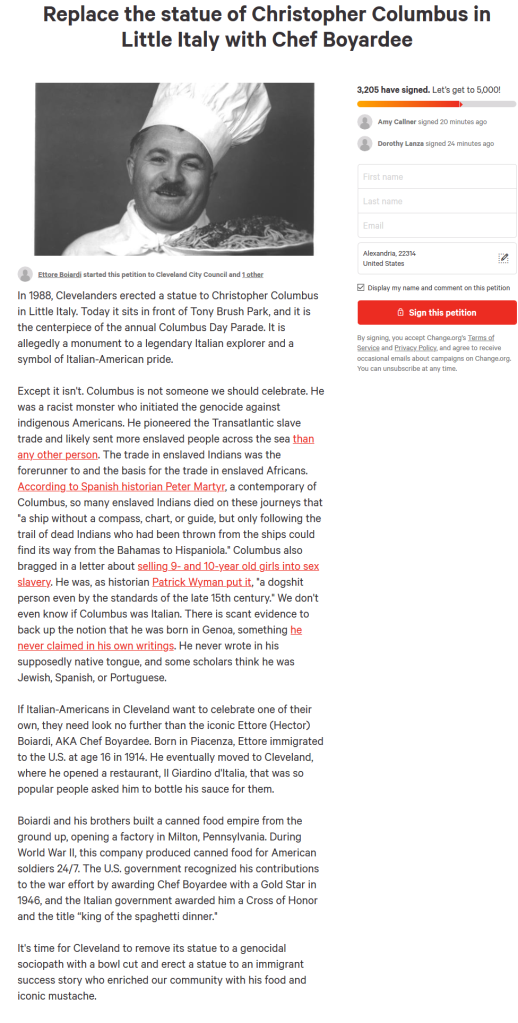