No, John Wayne doesn’t speak Spanish in “Red River,” but this was the only clip I could find of its iconic “Yahoo!” sequence. This may be the best Western ever; I don’t know, I go back and forth on it. Amazingly, Howard Hawks never won an Oscar…but then neither did Orson Wells, Alfred Hitchcock, or Cecil B. De Mille.

No, it’s not justified by “tit for tat,” but the ugly, ad hominem abuse heaped on President Trump by the Democrats this week was hardly better.

2. Oh, it’s Friday; why not check in with Paige Spiranac? You remember Paige, right? I posted about her here. She’s not much of a professional golfer, but she is now a “social influencer.” She has power and influence because, let’s be frank, she looks like this, and makes sure everyone knows it: 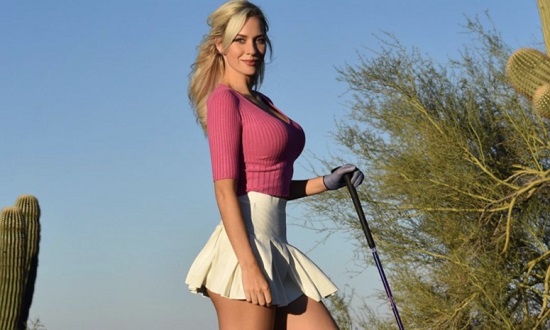 Now she has a viral ethics tweet about slow golfers:

This has actually sparked a controversy in social media, though there shouldn’t be any question that excessively pokey golfers are being rude and inconsiderate. The rationalizations being offered by defenders of slow play are, sadly, illustrative of the ethics skills of too much of the public. For example:

“That’s a dumb comment. Golf is a leisure sport. You are meant to enjoy the sport with friends and family and take time while doing it. Especially if you’re not playing for millions.”

3.  More fun from the Hypocrisy and Hate Convention! You know, if “Trump lies” is really going to be a campaign theme for a party, i t really is dumb to do things like this….

I’m sure the Democrats assumed nobody would notice, since there is so much voters aren’t supposed to notice. It does not bode well for the presence of such essential ethical traits as trustworthiness, honesty, competence, and diligence, however.

4. Oh-oh. I may be in trouble.The South Carolina Court of Appeals has ruled that a  motorist with an open fly may justify traffic police conducting a vehicle search. I have had trouble remembering to zip up all my life. At least once a year, I complete a three hour seminar only to discover that my fly was down the whole time.

In 2013, Cheryl Jones drove to the bus station in North Charleston to pick up her common law husband, Michael N. Frasier Jr. As the car containing the couple was  pulling away, an officer ordered them to stop, claiming the car’s brake light was out. In reality, the policeman had observed that Frasier “looked left, cleared right… at the whole parking lot, left and right” before getting into the car, and that seemed suspicious to his trained eye. During the stop, the officer noticed the zipper on Jones’s jeans was down. The officer told the trial court that in his experience, people sometimes try to hide narcotics in “their pants or crotch area.” Jones explained she was in a hurry and had jumped out of the shower before driving to the bus station and dressed quickly.  Becoming more suspicious still, the officer asked to search the vehicle. Eventually, cocaine was found in Frasier’s possession.

The question  before the three-judge appellate panel was whether the officer had any legitimate reason to extend the traffic stop and search the vehicle.

“Because we must evaluate the trial court’s findings for clear error, we reluctantly conclude evidence supported the trial court’s finding the officer had reasonable suspicion to extend the stop,” Judge James E. Lockemy wrote for the court. “Although we acknowledge that several of these factors would likely be insufficient standing alone to support a finding of reasonable suspicion, they must be viewed under the totality of the circumstances.”

Among those factors was Jones’ unzipped pants.

This is called “confirmation bias.”

5.  Again we must ask, “Just how stupid and apathetic is the American public?” Twitter mogul Jack Dorsey has donated $10 million through his charitable foundation to Boston University’s Center for Antiracist Research, founded  by Ibram Kendi last month. The gift has “no strings attached,” says BU, and shows Dorsey’s “unqualified support of Kendi’s vision of putting academic researchers at the forefront of the movement to dismantle policies that underlie racial inequity and injustice.” Kendi, director of the center and a professor of history, now has  “endless discretion about how the income from the gift will be used over time to advance the center,” President Robert Brown said.

BU hired Kendi away from D.C.’s American University, where he created the Anti-Racist Research and Policy Center and wrote his best-selling book, “How to Be an Antiracist.” Kendi now holds the Andrew W. Mellon Professor in the Humanities endowed chair,  previously occupied by  Holocaust survivor and author Elie Wiesel.

Here is what Kendri has said is his idea of “anti-racism“: