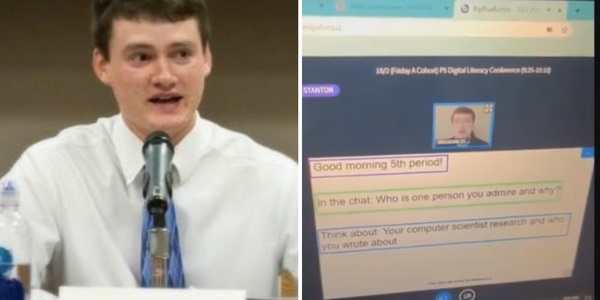 Tacoma, Washington sixth grade technology teacher Brendan Stanton needs to be fired, but that’s only the beginning. His conduct needs to be widely publicized, and the consensus needs to emerge that the kind of conduct he engaged in…

3. Is indoctrination rather than education

4. Is all too frequently allowed, enabled, and even surreptitiously encouraged in the educational system

Those who are inclined to defend Stanton should also be flushed out, condemned and declared to be what they are, and what they are is not reasonably disputable. They are deliberate enemies of American values and democracy. They should have a metaphorical red E, not on their chests, but their foreheads.

Now that all of that is out of the way, and I’ve had a stiff drink, here’s what Stanton did.

Each day, Stanton asks his remote learning students at Perry G. Keithley Middle School students a daily question, requiring students to write their answers in the online chatroom. According to a screenshot, one boy  wrote:

“I admire Donald J. Trump because he is making America great again. And because he is the best president the United States of America could ever, ever have. And he built the wall so terrorists couldn’t come into in the U.S. Trump is the best person in the world. And that’s why I admire him.”

Can’t have American students professing admiration of the President of the United States now, noy when a virtuous and woke teacher runs the class! Stanton kicked the vile child t out of the chatroom, deleted what he wrote lest it corrupt others whose brains and opinions he was assiduously molding to his personal specifications, and proceeded to attack the President and the student.

Incidentally, according to Gallup’s annual poll, President Trump tied with Barack Obama in 2019 as the most admired man in America. Parenthetically, he wouldn’t make my top hundred (neither would Obama).

Unfortunately for Stanton, he was busted, okay?

The boy’s mother, Elsy Kusander, entered the room to hear Stanton “berating the President” so she began recording what was being said on her phone. Kusander contacted Stanton to discuss the incident, and led him into what President Clinton’s defenders called a “perjury trap,” because he didn’t know she had made a recording.

Stanton claimed using President Trump wasn’t an appropriate answer because the question before the class was about “a computer programmer they admired” Students could name, he said, “someone from the community” if they couldn’t think of a programmer.

(Gee, who would I name as my most admired programmer? Such a wide range of options…)

The teacher also sought to blame another student who had been “offended” at the young Kusander’s answer.  “I do try to keep politics out of the classroom… because students have different opinions, right?” Stanton told the mother.

Imagine his face…well, under the mask anyway… when she revealed, “I came into the room, and you were talking, I got my phone and I recorded part of your conversation. I clearly saw and recorded what you were saying…”

“I do apologize if my words were not perfect at the time. If I used… if I said that Trump was ‘hateful and divisive,’ that may have been what I used at the time, but my purpose was in bringing us back to the conversation of computer scientists and the positive role that they’ve played in our history.”

Then he offered to apologize to her son, saying that he “totally” respected him “and his opinion” as an individual. “I appreciate you having this conversation with me,” Stanton said.

We now know beyond a reasonable doubt that Stanton is a liar, a toxic sufferer from Trump Derangement, an unprofessional teacher, and an untrustworthy one. He is also, based on his uncritical and standard Trump Derangement rhetoric, not very bright. How many other teachers like this infest that school? That school system? What administrators are enabling them? I salute Ms. Kusander for what she has done so far, bringing the story to the news media and nicely embarrassing the teacher. Still, it is not enough.

This needs to be fanned into a national conflagration. The mainstream media has to be made to explore it, because as we all know, they will bury the story if they report it at all. What happened to her son is not just a local incident, but the symptom of  national and perhaps fatal national sickness. All parents need to be shaken out of their apathy and confront it.

22 thoughts on “Yes, Fire This Teacher, Make Sure He Never Teaches Again, But That’s Just The Beginning…”