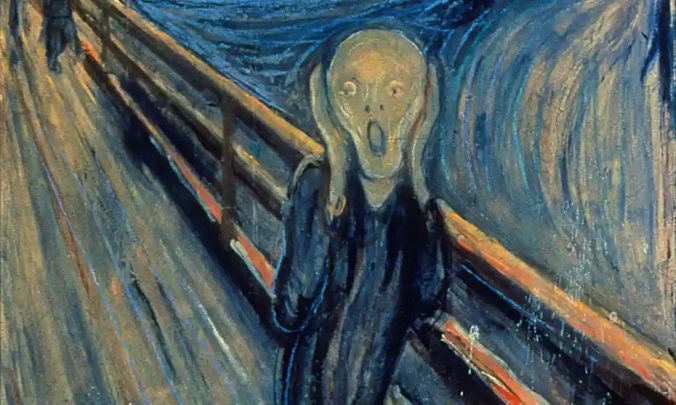 There was recent news about Edvard Munch’s “The Scream”…did you miss it? A tiny inscription in the corner of the original (the artist made several more) reads, “Can only have been painted by a madman.” For decades, expert have been arguing over who wrote it. The definitive answer came last month: it was the artist himself, who had been upset when a critic at an exhibition suggested that he was mentally ill. My wife and I saw a special traveling exhibition on Munch’s work in London several years ago. He kept painting the same disturbing images over and over again, not just “The Scream,” but others, like a woman with wild red hair that snakes out to strangle a man. We concluded then that he was nuts.

1. CNN has provided yet another example of miserable, biases, incompetent journalism. This one begins,

Poll of the week: A new Reuters/Ipsos poll finds that 55% of Republicans falsely believe Joe Biden’s victory in the 2020 presidential election was the result of illegal voting or rigging. Additionally, 60% of Republicans incorrectly agree that the election was stolen from Republican Donald Trump. These polls are the latest to indicate that Republicans mistakenly think that the 2020 election wasn’t legitimate, when it clearly was.

Who says it “clearly was”? How is that a fact? If it’s a fact, prove it. This is CNN injecting opinion into news reporting, and stating as fact what is the reporter’s opinion. Nor did those who replied that the 2020 election totals were the result of illegal voting or election rigging state that election “wasn’t legitimate.” They weren’t given that option. I, for example, think the election could be fairly called “rigged,” but it was still legitimate. Nor can CNN say that 60% of Republicans “incorrectly agree” that the election was stolen from Donald Trump. First, it is nearly impossible to prove a negative; this is CNN’s assumption. There are polls that claim to show that the fair reporting of Hunter Biden’s laptop and emails alone would have flipped the election. Second, “stolen,” like “rigged” is not defined. I think it is unlikely that the election totals were manipulated sufficiently to change the result in key states. I am certain that the news media and the other anti-Trump forces unethically set out to undermine the President’s chances at re-election with a four year battering of Big Lies, anonymous leaks, fake news, slanted news, biased news reporting and non-reporting of facts favorable to Trump or unfavorable to Biden. They cheated, and claiming now that those who feel the cheating made a difference are mistaken is like claiming that a runner unfairly tripped at the opening gun would have lost anyway.

To pass a law limiting the use of absentee ballots, as Georgia recently did, is no longer to choose a side in a legitimate debate over how to balance ballot integrity and ease of voting. Instead, to express concern about the risk of election fraud is seen as being engaged in a different sort of fraud — an illegitimate effort to disenfranchise the poor and minorities. The New York Times has aggressively insisted the last several months that worries over absentee and mail-in ballots, in particular, are dishonest violations of voting rights. Times staff opinion editor Spencer Bokat-Lindell wrote late in October that “[t]he effort to discredit and discourage mail-in voting” was the “culmination of a decades-long disinformation campaign by the Republican Party and others to suppress votes, especially those cast by Black and Latino Americans.” [But as] recently as September, Times reporters Stephanie Saul and Reid Epstein quoted Richard Hasen, who teaches election law at the University of California, Irvine, saying that “[e]lection fraud in the United States is very rare, but the most common type of such fraud in the United States involves absentee ballots.”

What accounts for the change from a dark presentation of the issue to a decidedly rosy one? RealClearInvestigations asked a spokesperson for the New York Times whether the paper’s current enthusiasm for absentee voting meant its staff’s previous criticism and reporting were wrong or misleading. RCI also asked whether the articles had been, even just unintentionally, part of what Times staff editor Bokat-Lindell called “a decades-long disinformation campaign by the Republican Party and others to suppress votes”? She did not respond to those two questions.

3. And this just in from The Great Stupid: Cher {I don’t mean she’s “The Great Stupid”; she’s just a little stupid, and for a celebrity, typically stupid) tweeted, 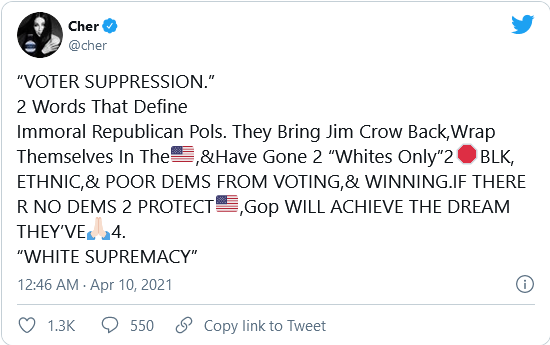 What are the odds that Cher has a clue regarding what the Georgia voting law actually says, other than the false clues that President Biden or his ventriloquist has thrown out? If she really knows what the Jim Crow laws were, how can she tweet this? And why isn’t this ignorant metaphor regarded by African-Americans as being as offensive as comparing a policy one doesn’t like to “The Holocaust”? Cher’s a high school drop-out and has been performing since she was 16. She’s welcome to her opinion, but as someone whose opinion in election law and democratic theory should carry no more weight than that of my dry cleaner, why does she think it’s appropriate and responsible.to abuse her celebrity and social media presence by spreading divisive, ignorant nonsense like this?

4. I’m composing a letter...to the reunion committee for my upcoming law school class reunion, announcing my resignation and my decision to have nothing to do with the campus celebration in the Fall, assuming there is one. I’ll share it if I’m happy with it. My diploma is turned to the wall, and I believe that Georgetown Law Center has embarrassed me as well as betrayed its mission, the law, academic freedom, due process, individual liberty and more. I’ve contributed a lot to the school, not money but more valuable and long-lasting than money, and the school knows it.

Here, conveniently, is an excellent essay by a current (and gutsy) GULC professor that states much the source of my decision.