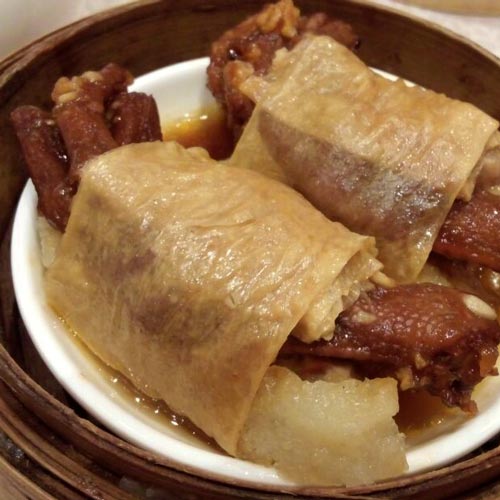 Let’s play the ever more popular quiz show, ” Is It Racist?”!

Today’s topic: Late-night television host James Corden has long featured on his show a food-centered “Truth or Dare” variation called “Spill Your Guts or Fill Your Guts.” Celebrities choose to either answer personal questions or take a bite of a food that most viewers would deem nauseating or not properly food at all. Recently the cherubic British comic employed a table in the bit filled with Asian delicacies like chicken feet, pig’s blood and thousand-year eggs.

That was too much for the online outrage squad, apparently. An online petition condemning Corden’s use of Asian foods as disgusting has attracted than 46,000 signatories. The premise is that making fun of Asian food is racist.

Kim Saira, 24, a Los Angeles activist who organized the petition, told an interviewer, “James Corden is a white person and is actively using ingredients from Asian cultures and profiting from it and showing it in such a negative light. There’s a way to not like foods and still be respectful about it.”

The New York Times interviewed Lok Siu, an associate professor in the Department of Ethnic Studies at the University of California, Berkeley who agreed that Corden’s joke is indeed racist because it disrespects people’s cultures. The choice of Asian foods to highlight as disgusting to typical Americans makes Asian Americans feel more vulnerable or marginalized.

Oh yes indeed! “You use food as a metaphor to describe that distance, the kind of strangeness between a group of people that you don’t understand and their habits, the way they’re eating, the smell that comes with the spices,” she said. “There’s something around the way we discuss food, the way we think about food in our acceptance or rejection of it, it’s a rejection of a culture and the people that’s associated with it.” Siu regards the food as a metaphor for Asians not qualifying as “normal.”

“Why is this not seen as racist immediately?” Professor Siu asked. “If he made fun of any other group, would there be a much more broader understanding that that’s racist? It’s not immediately thought of as being racist and damaging because it’s Asian food. There is such a denial of anti-Asian racism in the U.S., and this is a prime example of it.”

Again, I have to ask, “Really, professor?” I’m Greek, and the Greeks drink a horrible wine called retsina, which has resin in it. The Greeks tainted their own wine so the conquering Turks wouldn’t drink it, but continued to drink the foul stuff themselves out of pure orneriness. Is it bigotry to mock Greek wine as terrible? Even Greeks do it. Corden has used infamously icky food from his own country of Great Britain, like blood pudding and head cheese in the segment over the years. He’s also used Rocky Mountain Oysters, a treat from U.S. cattle country. (I’ve tried them.)

Corden, predictably, is vowing never to make fun of Asian food again. “Our show is a show about joy and light and love. We don’t want to make a show to upset anybody,” he says. If there was ever a celebrity I would have bet the farm on being a weenie and capitulating to political correctness bullies, it would be Corden.

Your Fourth of July, hotdogs, corn on the cob and apple pie Ethics Alarms Ethics Quiz is:

Is it racially insensitive and thus unethical to make fun of Asian foods?

This reminds me of a personal episode. I was having lunch with a friend in D.C.’s Chinatown, and the menu had only mysterious Chinese names. Confident of my Asian food erudition and stupidly unwilling to ask for more information, I pointed to an appetizer entry. The Chinese waiter looked at me askance and said, “Are you sure? Only our Chinese customers order that.” I was insulted, and snapped back, “If it’s good enough for them, it’s good enough for me! Of course that’s what I want.” He returned with my dish: Two amputated duck legs with webbed feet attached, sitting on a small piece of bean curd floating in some kind of oily substance.

“Here you are, sir,” he said, smiling broadly. “Just as you ordered: duck feet!” Two other waiters could be heard giggling behind him.

Being the way I am, I said, “Looks delicious! Thank you!” and began trying to figure out how I would eat the damn things. The experience was like chewing salty rubber bands with little bones inside. At least three times as I labored to finish, one of the waiters, three in all, came to our table and asked, obviously enjoying the situation, “You like duck feet?” “Best duck feet I’ve ever tasted!” was my most honest response. And I did eat them. When the waiter handed me the bill, he said, “So glad you like duck feet!” and broke out laughing.

He got a big tip. A good story is almost worth having to eat duck feet, and I learned a crucial lesson about trying to fake my way through ordering at restaurants.

26 thoughts on “Your 4th Of July Ethics Quiz: Food Racism?”