John Wayne was born Marion Robert Morrison on this date in 1907, in Winterset, Iowa. His family eventually moved to Glendale, California, where he grew up and attended USC on a football scholarship. Through a series of events too complex to write about here, Wayne found his way into movies and eventually devoted his career to the mission of creating of an iconic American male hero. That creation, which included some dark elements as well as admirable ones (See “Red River,” “The Searchers” and “The Man Who Shot Liberty Valance”) that still has a strong influence, and I believe an overwhelmingly positive one, on the culture.

In this he was assisted by two of the greatest of American film directors, Howard Hawks and John Ford, but creating “John Wayne” was Marion Morrison’s life’s work, to the extent where he refused to shoot a character (who has shot him and was running away) in the back in his final film, “The Shootist,” stating that it would violate the principles “John Wayne” stood for.

The man was not the character and didn’t claim to be. He was well-read, preferred to wear sports jackets and slacks, loved chess and by Hollywood standards—not a high bar admittedly— was an intellectual. Wayne once said that he never though of himself as John Wayne and still had “Marion Morrison” locked in his brain. They called him “Duke” in his pre-Wayne days, so he preferred that name off camera.

There are only five genuine Hollywood icons: Chaplin, Marilyn Monroe, Shirley Temple, Fred Astaire and John Wayne, and despite efforts to “cancel” him, Wayne remains the most vibrant, influential, and visible of the group. When I was teaching ethics to lawyers in Mongolia, the judges and lawyers knew virtually nothing about American culture, but they knew (and admired) John Wayne.

1. I’m old enough to remember when it was conservatives who were always trying to censor free speech...apparently many triggered Democrats on social media are demanding that the websites that sell this mug be shut down, or that the mug be censored “like those racist Dr. Seuss books.” 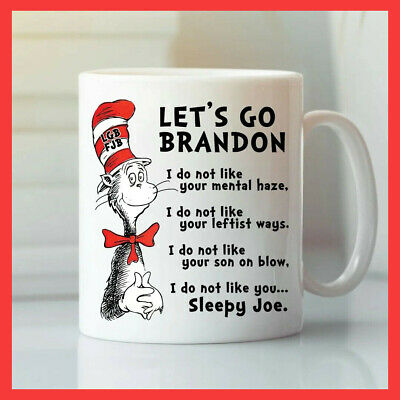 I have stated here repeatedly that using “Let’s go Brandon!” as code for “Fuck Joe Biden!” is indistinguishable from “Fuck Joe Biden!,” and thus wielding the catch phrase in public is uncivil, and doing so in the halls of Congress or in public statements by elected officials is unethical. However, if someone wants to drink coffee out of that mug, or to gift it to a fellow Biden critic, that is entirely a personal choice that cannot and must not be impeded by the political correctness police.

Sometimes I wonder if these people have any clue about what’s in the Bill of Rights and why.

2. I’m not sure I understand this story at all... David Sabatini, a renowned cancer researcher, has had his research and his career derailed after a former lover has  turned on him.  Sabatini was forced out of MIT when fellow scientist Kristin Knouse claimed he “groomed” and “coerced” her into a sexual relationship, according to court papers documents. He then went to NYU’s Grossman School of Medicine, but after a social media uproar and student protests, the school announced on this month that it would not hire him. Knouse did not work in Sabatini’s lab or report to him, so I am having trouble figuring out the required “power imbalance” that could justify sexual harassment accusations. She is also 21 years younger than he is, but was not a student. Nor does she deny that their sexual liaison was consensual. Sabatini and Knouse began an affair when both attended the same conference in 2018 while he was in the midst of a divorce. When he ended the relationship in 2020, she complained she’d been harassed, and then sued, alleging Sabitini oversaw a “sexualized” environment in his lab and had  “groomed” her into a sexual relationship.

However, the so-called report, by a law firm, regarding these claims came up with the proverbial weak tea. Its 248 pages said that David Sabatini had failed to disclose his consensual relationship with Knouse. On top of that, the report claimed that Sabatini’s behavior created a sexualized undercurrent in the lab,” and that “his indirect influence over Knouse violated  the “spirit” if not the letter of sexual harassment prohibition. Though he didn’t supervise Knouse, work directly with her, threaten her, propose a quid pro quo or have the power to fire her, Sabatini according to the report, had “experience, stature, and age” that gave him unethical control over her conduct.  “While we have not found any evidence that Sabatini discriminates against or fails to support females in his lab, we find that Sabatini’s propensity to praise or gravitate toward those in the lab that mirror his desired personality traits, scientific success, or view of ‘science above all else,’ creates additional obstacles for female lab members,” the report concluded.

Bari Weiss has a lot more details. Too many people interviewed for the story make a “King’s Pass” argument, opining the Sabatini is such a genius and has so much to contribute to science and humanity that he should not be grounded by something as mundane as sexual misconduct allegations. However, as I read the facts, the ethical issue is very different. It does not appear that the scientist received due process from MIT, and that this is a genuine an instance of professional “cancellation” based feminist tribalism. The other question is how a 29-year-old professional woman can credibly claim that she was “groomed” when the male groomer had no actual means of controlling her.  Are women fully capable of self-determination or not?

As I said at the start, I’m not sure I know “what’s going on here.”