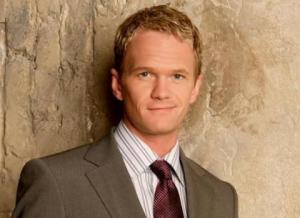 Neil Patrick Harris...no douche he! But is it for the right reasons?

In a cover feature story for Entertainment Weekly, Neil Patrick Harris (or whoever ghost-wrote for him) lays out his Hollywood Survival Guide. Secret of Hollywood Survival #6 for the star of “How I Met Your Mother” and ubiquitous awards show host is “Don’t Be A Douche”:

“Hollywood affords many opportunities to be a douche of epic proportions,” writes the grown-up “Doogie Howser,” “Avoid the temptation.”  He continues:

“Being a pleasant person has got to count for something….Actors sometimes take themselves far too seriously and put themselves on a different level [from the crew.] But everyone’s working really hard and should be afforded the same level of respect.”

For that, Neil gets an Ethics Alarms salute. Unfortunately, he scars his achievement by going on to explain how the make-up people, the film editor and the transportation department can really nail you if you don’t treat them well.

Given the breezy tone of the article, Harris was probably joking, but the joke reinforces the misconception many people have about ethics, which is that ethical conduct is a quid pro quo. It’s not. The Golden Rule isn’t “Do nicely unto others do they won’t screw you over,” and someone’s less than nice behavior  toward you doesn’t justify your being a douche to him. One isn’t respectful to the waiter because he’s liable to spit in your soup if you’re not, but because it’s the right way to treat other human beings.

Neil Patrick Harris certainly seems like a decent guy, and he probably is. I just wish, in the pursuit of a pretty stale joke about how the make-up people will get even by making you look like a troll, he hadn’t reinforced one of the most persistent of unethical rationalizations. 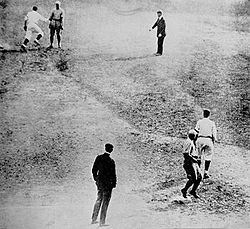 I was watching baseball on television all day yesterday, and had to see more commercials than are good for me. It struck me that despite the advent of the so-called “Information Age,” commercials seem to be written by increasingly ignorant writers, and ads that contain blatantly incorrect facts make it to the air where they rot innocent young brains and delight badly-educated  old ones.

Since the average TV commercial must be seen by literally hundreds of writers, executives and technicians on its way to this carnage, what does this tell us? It tells us that the education system is just as bad as we feared, and that these irresponsible people don’t care enough about being accurate to do a 20 second Google Search so they won’t misinform people. Making such a search is called due diligence and responsible conduct. Not doing so is called lazy, negligent and unethical. END_OF_DOCUMENT_TOKEN_TO_BE_REPLACED 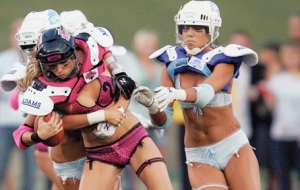 Does this sport condone rape? Or tickle fights?

I think professional lingerie football is a strange sport, to be sure. Attractive women dressed in bras, panties, helmets and shoulder pads play football before paying customers, almost all of them men. The players seem to play hard and many of them are excellent athletes. Is it sport? Is it sex? Is it spectacle?

Sondra Miller, a feminist and rape crisis counselor, believes that lingerie football increases the incidence of rape and violence against women, and writes that the proper ethical conduct is to end it:

“Don’t support the women’s lingerie football league. Don’t buy a ticket. Don’t watch it on TV. Don’t talk about it at the water cooler. Ignore it — or better yet — speak out against it.” END_OF_DOCUMENT_TOKEN_TO_BE_REPLACED 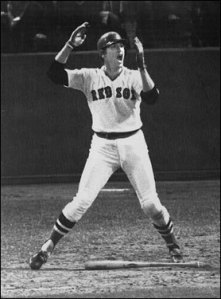 Thanks Carlton. I won't forget.

This is not going to be a fun day.

The Boston Red Sox, the baseball team to which I have devoted a remarkable amount of my time, passion and energy over a half-century, are threatening to complete late season collapse of embarrassing and historic proportions. A spectacularly bad month of September has the team holding on to its once assured post-season play-off slot by its fingernails, and the squad appears to be dispirited and unhinged. Today the Red Sox play a double-header with the New York Yankees, the team’s blood-foe, and its prospects don’t look good. I, of course, must watch both games.

Following a losing baseball team is emotionally hard—I listened to or watched every game the Red Sox played in a six year period in which they never had a winning season— but following a collapsing winning team is much, much worse. It feels like a betrayal, yet at the same time the fan feels guilty for being angry with the players, who undoubtedly are suffering more than you are. This is, after all, their career. Still, you have had your hopes raised over many months; you have, if you are a serious fan, attached your self-esteem to your team’s fortunes. Watching it tank is like watching a presidential candidate you have argued for, and gone to rallies for and contributed to make an ass of himself in a debate. (And no, I’m not a supporter of Rick Perry.) END_OF_DOCUMENT_TOKEN_TO_BE_REPLACED 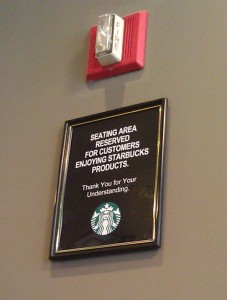 OK...NOW it's selfish to squat at tables for hours.

I owe thanks to a blogger named JJ (and to Ken at Popehat, whose post brought him to my attention) for giving me one of the best illustrations of what I call “The Compliance Mindset” I have ever seen.

I’m sure it would horrify JJ to learn this, but he is ethically aligned with all the financial wheeler-dealers and unscrupulous mortgage lenders who crashed the U.S. economy. They also thrived in the Compliance Mindset, as do corrupt politicians, deceptive advertisers, dishonest journalists, sleazy lawyers, and millions of others in our culture who make life miserable for the rest of us for their own benefit. All of these people adopt the convenient belief that something must have a formal rule or law prohibiting it before it becomes wrong. This is, in fact, the opposite of the truth: if people were completely ethical, we would need very few rules. The Compliance Mindset is really an unethical rationalization that allows people to be rude, selfish, irresponsible, unfair, or worse because their conduct is technically legal and there isn’t a rule against it yet. Usually the rule or law arrives after a lot of needless harm has been done. END_OF_DOCUMENT_TOKEN_TO_BE_REPLACED 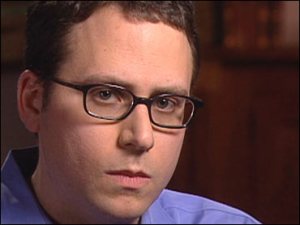 Stephen Glass: Would you trust this man?

When New Republic Editor Charles Lane fired Stephen Glass, the infamous journalist for that and other magazines who in 1998 was exposed as having fabricated many articles he had represented as true, he was quoted as saying,  “Glass is a man without honor who operated out of hostility and contempt; he has no place in journalism.”

Now the question is whether such man now has a place in the law.

A petition for review has been filed by the California Commission of Bar Examiners contesting the  State Bar Court’s finding that Glass is now morally fit to practice law. He passed the California bar exam in 2007, but the committee blocked his admission, finding that his previous record of professional dishonesty, though in another profession, showed such a deficiency of character that it disqualified him from legal practice as unfit. Then a hearing judge over-ruled the Commission, and found that Glass had reformed sufficiently to render trustworthy. The opinion was upheld 2-1 by the State Bar Court. END_OF_DOCUMENT_TOKEN_TO_BE_REPLACED 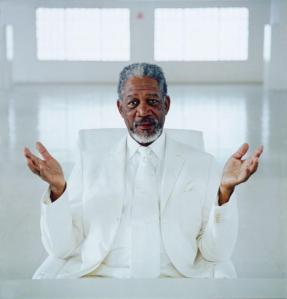 The latest in this disgraceful parade is distinguished African-American actor Morgan Freeman, who told CNN’s Piers Morgan in an interview that the Tea Party and the Republican Party antipathy to the President is motivated by racism, saying…

“Their stated policy, publicly stated, is to do whatever it takes to see to it that Obama only serves one term. What’s, what does that, what underlines that? ‘Screw the country. We’re going to whatever we do to get this black man, we can, we’re going to do whatever we can to get this black man outta here’…It is a racist thing…it just shows the weak, dark, underside of America. We’re supposed to be better than that. We really are. That’s, that’s why all those people were in tears when Obama was elected president. “Ah, look at what we are. Look at how, this is America.’ You know? And then it just sort of started turning because these people surfaced like stirring up muddy water.” END_OF_DOCUMENT_TOKEN_TO_BE_REPLACED 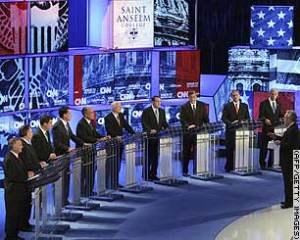 Cowards. All of them.

In three consecutive Republican presidential debates, members of the partisan audience have displayed obnoxious and callous attitudes in response to questions directed to the candidates. In the first, a portion of the assembled conservatives cheered an accounting of the convicted murderers put to death by the Texas penal system. During the second, vocal members of the audience shouted “Yeah!” to Wolf Blitzer’s questioning whether uninsured Americans should just be allowed to die without medical care. Then, in this week’s debate, the crowd jeered a videotaped soldier who declared himself as gay before asking if the candidates would support the recent elimination of “Don’t Ask Don’t Tell” as military policy.

Pundit efforts to characterize these outburst as typical of the Republican, conservative or Tea Party constituencies are blatant stereotyping, cynical and unfair. Anyone who has any experience speaking or performing to an audience knows that a few people can dominate audience reaction without being representative of it. No, it is not the Republican constituency that was exposed by these incidents, but the contenders for that party’s and the nation’s leadership. The failure of any one of the assembled candidates, nine in the first two debates, ten this week, to clearly and emphatically condemn the offensive reactions and the “thinking” underlying them suggests that none of the candidates possess the integrity, courage, confidence and values required to be a trustworthy leader of the United States. END_OF_DOCUMENT_TOKEN_TO_BE_REPLACED 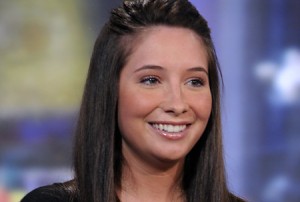 Bristol Palin's celebrity in the absence of talent, wit or achievements is one good reason to resent Sara Palin

In a spontaneous encounter posted on YouTube, Bristol Palin was confronted by an insult-spewing patron the at Saddle Ranch Bar and Restaurant in West Hollywood last night.

Palin, 20-year-old daughter of  Sarah Palin had just been thrown from a mechanical bull while filming her reality show for the BIO Network, when  a 47-year-old man began shouting at her.

“Did you ride Levi like that?” he yelled, referring to  the father of Bristol’s child, who has just published his memoirs of their relationship for the brain-damaged market. “Your mother is a whore! Your mother is a fucking devil!” he continued.

Bristol approached the man and asked, “Is it because you’re a homosexual and that’s why you hate her?”

“Pretty much … and why’d you say I’m a homosexual?” he responded.

“Because I can tell you are,” Bristol said, setting off the heckler again. “You’re fucking white trash from Wasila!” he screamed as she left the bar with her production crew. “Fuck you, you fucking bitch!”

Internet commenters are praising Palin for standing up to the clod. She deserves no praise. His sexual orientation had nothing to do with episode, and for her to raise that as her initial response to his unprovoked and hateful rant demonstrates that

2. She’s not ready for prime time, even as a reality star, and

3. She’s not even smart enough to realize that the episode reflects poorly on her, since the incident was taped and posted by her own film crew.

But we already knew that, didn’t we? 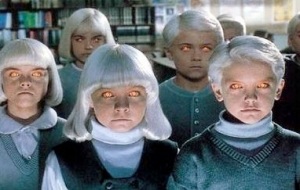 A German language teacher at Western Hills High School in Fort Worth, Texas sent 14-year-old honors student Dakota Ary to the principal’s office for telling a classmate that he believes “homosexuality is wrong.”

Ary was then suspended as punishment. Homosexuality isn’t wrong,, but the school was.

Ary, who was raised in a church that believes homosexuality violates God’s laws, has a right to believe whatever he chooses to, and also has a right to express those beliefs as long as he doesn’t denigrate fellow students or incite violence or a disruption. There are words for schools punishing students for their beliefs, and among those words are “indoctrination,” “coercion,” brain-washing,” and “unethical.” END_OF_DOCUMENT_TOKEN_TO_BE_REPLACED