Hollywood blogger Christian Toto can be forgiven for perhaps—perhaps—over-estimating the influence of celebrities on public opinion; he does live in Tinseltown, after all. But if he’s off in his alarm, he’s not off by much. Reacting to superstar Jennifer Lawrence’s political rants in a new Vogue interview, Toto writes in part,

There’s no reason for Lawrence to get political in a Vogue feature story….Lawrence mentioned politics to gin up support from her fellow progressive stars. It’s a career choice, and arguably a smart one considering the state of the industry. It still hurts the country, and apparently she doesn’t care.

Conservatives will blast her comments. Liberals will either nod in agreement or think she’s gone too far. Everyone, though, will acknowledge the obvious. It’s another sign of a country teetering toward a breakup.

Yes, Lawrence is just one celebrity. And no, celebrities can’t stop climate change, gun crimes or other maladies. They can’t even pull off an Oscars ceremony without a physical altercation …

They do have bully pulpits, though, and when their interviews go viral the messages reach the masses. For better and worse.

Lawrence’s message is clear. Hate half of the country that doesn’t align with your political party, even if they’re your own flesh and blood…she’s so intolerant she can’t share empathy with her family.

Where does that leave the rest of us?

Well, unless we recognize that in most cases celebrities don’t know what they are talking about when they delve into topics unrelated to their specialized niche, and have been made stupid by bias, narcissism and living in an echo chamber (if they weren’t stupid already), it leaves us being influenced by fools.

END_OF_DOCUMENT_TOKEN_TO_BE_REPLACED 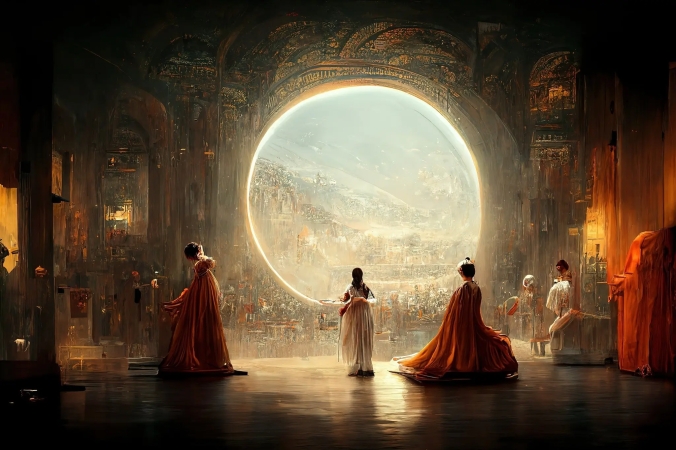 The Colorado State Fair’s annual art competition rewards artistic excellence prizes in painting, quilting, and sculpture, with several sub-categories in each. Jason M. Allen got his blue ribbon with the artwork above, which he created it using Midjourney, a program that turns lines of text into graphics. His “Théâtre D’opéra Spatial” won the blue ribbon in the fair’s contest for emerging digital artists.

He’s being called a cheater. Just this year, new artificial intelligence tools have become available that make it possible for anyone to create complex abstract or realistic artworks by simply by typing words into a text box. The competition wasn’t paying attention, and in the era of rapidly moving technology, that’s always dangerous. Nothing in the rules prohibited entering a “painting” that was made using AI. END_OF_DOCUMENT_TOKEN_TO_BE_REPLACED

William MacAskill is a philosopher, a professor at Oxford who has a new book out for the riff-raff, “What We Owe the Future.” MacAskill is a key spokesman for the so-called “effective altruism” movement which advocates “longtermism,” a an ethical position prioritizes the moral worth of future generations and obligation of present society to protect their interests. You know where this goes, right? “Longtermists argue that humanity should be investing far more resources into mitigating the risk of future catastrophes in general and extinction events in particular,” writes New York Magazine. Got it. This is a another climate change activist group shill trying to get civilization to shut down based on speculation, scaremongering and dubious science.

Ann Althouse, who has the time on her hands to read the increasingly leftist New York Magazine so I don’t have to, flagged an interview with MacAskill, and had the wit and integrity to note that the philosopher so focused on the value of future lives never mentioned abortion nor was asked about it. Ann, who initially pronounced the Dobbs decision monstrous, does have integrity, and tracked down another recent book-promotion interview  where abortion was raised. Asked whether his movement should be anti-abortion, MacAskill says no, and when pressed on his reasons (admittedly lamely), resorts to pure jargon and doubletalk, ducking the issue: END_OF_DOCUMENT_TOKEN_TO_BE_REPLACED 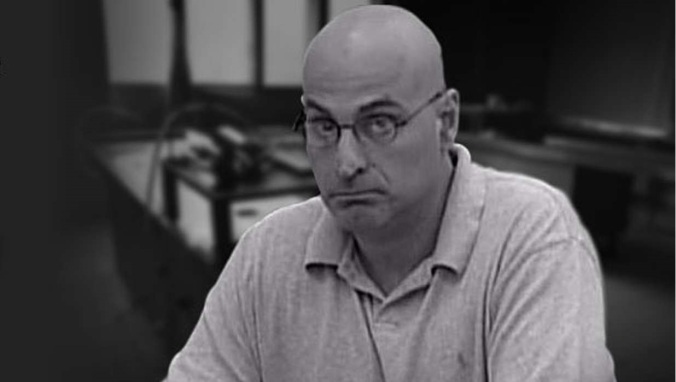 I intended to write a post after seeing Tony Dye’s 2010 documentary “Body Snatchers of New York” a few years ago. Through a series of interviews with law enforcement officials, lawyers, journalists and victims, it tells the story of a sensational case out of Brooklyn in 2006 where a former dentist and his associates operating a company called Biomedical Tissue Services of Fort Lee, New Jersey, conspired with funeral homes to steal human bone and skin from dead bodies. The tissue was then sold to various processing companies to make medical products, including dental implants and spinal disc replacements. These, in turn were sold to hospitals to be transplanted.

In some cases, the families of the deceased individuals were told that their loved ones had been cremated when in truth they had been carved up and skinned. One such body belonged to the late Masterpiece Theater host, Allistair Cooke. Biomedical Tissue Services made as much as $250,000 from processing each body. In addition to lying to families and not receiving consent to distribute tissue and bone from corpses, the company also routinely sold body remnants from dead individuals who had suffered from drug and alcohol addiction, cancer, AIDS, hepatitis, and other diseases that compromised the safety of the tissue without informing their purchasers, tissue recipients or their doctors.

END_OF_DOCUMENT_TOKEN_TO_BE_REPLACED

lf you are not familiar with Sam Harris, who has gained a fair amount of visibility (hear-ability?) as a result of his podcast, you might want to listen to the first 35 minute or so of the interview with him above, but the important part comes afterwards. As soon as your hear that, assuming you’re not Liz Cheney, Adam Schiff or George Conway, you will realize that you wasted your time, because the man is not worth taking seriously.

The interview is outright scary, and should make people seek psychiatric attention when they sense they are nearing the point that Harris has, tragically, reached. Harris is honest and clear-eyed enough to recognize the (still running) 2016 Post Election Ethics Train Wreck for what it is [“Taking down the New York Post’s [laptop article]? That’s a Left-wing conspiracy to deny the presidency to Donald Trump. Absolutely it was. But I think it was warranted.”] but not ethical enough to realize that as an authority and scholar lesser mortals rely upon for enlightenment, he has an obligation not to sink into mob mentality just because he is surrounded by peers and friends who are consumed with unthinking fear, anger and hate.

After expressing his approval of Liz Cheney’s announced determination to use any means necessary to prevent Donald Trump from running for President, Harris is asked “You’re content with a conspiracy to prevent somebody being democratically elected President?” He responds with a flaming rationalization stew (and a terrible analogy) that belongs in the “Bias makes you stupid” Hall of Fame: “If there was an asteroid hurtling toward earth and we got in a room together with all of our friends and had a conversation of what we could do to deflect its course, is that a conspiracy?”

Ah! See, if Trump is the same as an extinction-threatening asteroid, so “Ethics is a luxury we can’t afford,” “It can’t make things any worse,” “It’s for a good cause,” “These are not ordinary times” and more rationalizations all apply. But Trump is just a politician and a human being, and even our politicized scientists cannot declare him an extinction event. Nor is planning a conspiracy: there are no laws declaring that blocking the path of an asteroid is wrongful. When someone as intelligent as Harris once was hears something that stupid leaping from his mouth, he must be able to recognize it, or something is seriously amiss.

END_OF_DOCUMENT_TOKEN_TO_BE_REPLACED

I can only find out about EA post-worthy tweets second-hand, as I killed my Twitter account after the platform censored the Hunter Biden laptop story. I actually followed Tribe’s tweets before that, because his public descent into demented hackery after such a distinguished legal and academic career had the tragic fascination of gruesome car wreck as well as conveying a useful lesson in mortality: I have asked my wife to bash in my head with a brick from behind should I ever jump the cognitive shark as obviously as Tribe has.

This time, Ann Althouse was my tweet source, though her post’s subject was another, slightly less whacked-out tweet re-tweeting Tribe by author Joyce Carol Oates. Tribe’s tweet, in turn, only quoted a typical piece of furious Trump-Deranged venom from Times columnist Maureen Dowd. Before his brain started to melt, the idea of Prof. Tribe appealing to the authority of the likes of Dowd would be like imagining Henry Kissinger quoting “Mark Trail.”

There goes my head. I find this story incredible. Northeastern and Boston College co-hosted a debate tournament last Fall restricted to students who “do not identify as white.”

Here is the announcement, tracked down by Campus Reform (hence the logo in the background):

Analysis: What the hell?

END_OF_DOCUMENT_TOKEN_TO_BE_REPLACED

Normally a truly stupid statement by a punditry bottom-of-the barrel (that is, “The View”) feeder like Ana Navarro wouldn’t justify a stand-alone post on Ethics Alarms. However, Rationalization #22, The Comparative Virtue Excuse or “There are worse things,” is a blight on human thought, an excuse for the inexcusable, and the rationalization that opens the door to endless society blunders and maladies. This desperately needs to be understood by a controlling majority of American society, and getting utter fools like Navarro laughed and mocked off of television, even arid ranges like “The View”—where the dolts and the idiots play, and all of the words are discouraging—is paramount.

Oh, right, I almost forgot: her Hall of Fame-worthy statement. Here it is:

“I’ve yet to see a kid that dies from being exposed to a drag queen.”

END_OF_DOCUMENT_TOKEN_TO_BE_REPLACED

The depressing thing is that I should have to explain to some people what’s unethical about this.

The show, it appears, was sold out. Never mind. People who were not going to be at the show didn’t want people who did to have the chance, and a cowardly, mealy-mouthed, censorship-embracing management didn’t have the integrity or ethical literacy to tell them to learn to live with the reality that everyone doesn’t have to think like they think.

END_OF_DOCUMENT_TOKEN_TO_BE_REPLACED

There is a point where loyalty, unconditional love and bias-born blindness can no longer be tolerated nor excused, and Adriana Reyes, the mother of mass murderer Salvador Ramos, reached that point and passed it.

Her various efforts to defend her now fortunately dead son or to mitigate his incomprehensible crimes do nothing but harm. They contribute just this to understanding of the tragedy: Ramos was raised by a stupid, distracted mother with the ethical instincts of a sea sponge. Thanks, Adriana, but we kind of figured that out. We don’t need the reminders.