“I only date Black…then it’s about chemistry, personality, goals. Is there a synergy? Can I help you? Can you help me?”

He’s either very frank and courageous, or extremely naive. Naturally, the Right is pointing to him as an example of the Hollywood culture’s hypocrisy. “Imagine if a white celebrity said this the other way around,” asks the conservative “Gotcha!” site “Not The Bee.” ” If you’re putting skin color above things like chemistry and personality, however,” Holly Ash writes, “I might argue that you’re technically, per the definition of the term, a little racist.” Oh? I might argue that you are using a lousy definition. Racist means that one regards one race inferior to another, to the extent of regarding individuals of the race intrinsically inferior. What Boyega is describing as a bias, and biases are innate, natural, human, unavoidable, and yes, they make us stupid. It is our duty as ethical beings to try to recognize biases and their emotional, irrational nature, and, if possible, get past them. However, preferring the company of people more like yourself than not is a a very natural bias, especially when it comes to romantic and intimate relationships. A racial bias like Boyega’s has to be kept in its proper place, just like, say, a man’s preference for attractive women. That is his right as sexual creature, but the bias is unethical if he’s hiring a staff….unless he’s directing a “Charley’s Angels” movie, or something similar. END_OF_DOCUMENT_TOKEN_TO_BE_REPLACED

Steve-O-in NJ has some time on his hands, and he made Ethics Alarms the beneficiaries with this Comment of the Day, an excellent overview of the late Queen Elizabeth’s life, reign, and service to her nation.

I enthusiastically second virtually all of it, though I would have liked to see him mention Princess Anne in a positive light. She has been a tireless working royal for her entire adult life, and she has managed to avoid the scandals that tarnished the Royal Family at the hands of her siblings and aunt.

I also agree with Steve that the Queen earned a place in the The Ethics Alarms Heroes’ Hall Of Honor, which hasn’t had a new inductee in a while. I will add his essay to that page as soon as I can.

Here is Steve-O’s Comment of the Day on the life of Queen Elizabeth 1, in today’s Open Forum.

Elizabeth II wasn’t born to be queen. She was the elder daughter of Albert, the Duke of York, second son of the formidable (although no brain-trust) George V, who led the United Kingdom through the Great War and the beginning of the end of empire. His eldest son, known as “David” among his friends, but whose name has gone down in history rarely as Edward VIII, more often as the Duke of Windsor, almost always as the Edward of “Edward and Mrs. Simpson” and without exception as a failure (sometimes even as a potential traitor) lasted no more than a year before he let an unprincipled whore pull him down from his throne and into the shadow of disapproval. Hearing the announcement, the precocious princess, barely 10 years old, remarked to her younger sister Margaret that “Papa is to be king.” Supposedly Margaret said something to the effect of “then you’ll be queen? Poor you.” END_OF_DOCUMENT_TOKEN_TO_BE_REPLACED

I guess I’m going to have to show young Doocy more respect. The flagrant nepotism that allowed him to acquire an on-air job with Fox News made me reflexively suspicious of his qualifications, but he has proved himself to be a quick learner, a tough questioner, and as in this latest episode, gutsy.

Doocy asked President Biden’s paid liar Karine Jean-Pierre about Democratic claims that the 2016 election was “stolen” or illegitimate as a counterpoint to the President’s Reichstag address last week asserting that GOP rhetoric that Biden’s 2020 election victory was illicit threatened democracy.  When Jean-Pierre ducked Doocy’s question, saying that the White House will focus on the present rather than 2016 (baseball fans recognize this as the “Mark McGwire Deflection”), Doocy read her some of her own past tweets, like…

“If denying an election is extreme now, why wasn’t it then?” Doocy asked. END_OF_DOCUMENT_TOKEN_TO_BE_REPLACED

Scott Greenfield’s post yesterday on his blog Simple Justice was fortuitous, coming as it did shortly after my musings (item #2) about a trusted and respected legal ethics colleague whose ugly past ethical breach I only recently learned about. Greenfield isn’t quite discussing the same issue—my dilemma involves trusting someone’s judgment and integrity, his involves pure friendship—but his post is helpful nonetheless, and admirable.

In fact, it reminds me of my father.

END_OF_DOCUMENT_TOKEN_TO_BE_REPLACED

Uber driver Fritz Sam, 54, was driving a passenger to LaGuardia airport when he saw flames coming from a Brooklyn brownstone. Sam stopped his car and dashed into the burning building. He beat the fire department by about five minutes, and had guided two residents into the street to safety by the time firefighters arrived.

Who is the other Ethics Hero, Jemimah Wei? She was his passenger. Sam was driving her to the airport to catch a plane, but when he turned to her and asked, “Can we stop and help?” Wei, 29, immediately replied, “Obviously!”

END_OF_DOCUMENT_TOKEN_TO_BE_REPLACED

Now for the rest of the story begun in Part I.

The story of the rejected and abandoned Russian orphan haunted “48 Hours” reporter Troy Roberts after he bid the girl farewell  in the Russian hospital. He wanted to know what had become of her, and tried to track her down over the years, with no success. Then, after more than two decades had passed, Caralee reached out to him and they arranged to meet once again.

That supposedly homicidal little girl who was diagnosed as incapable of love now lives in North Carolina as Sabrina Caldwell. She is 33, happily married and has four young children. Roberts met with her near Sabrina’s home, and he spoke with her husband as well. Sabrina explained that she was depressed and even suicidal when she was with Crystal and Jesse, who she felt were more interested in her younger brother than her. When she was falsely accused of trying to kill Joshua, whom she says she loved, she told Roberts she “wanted out.” She agreed that she tried to kill him. She made up the claims that she was hallucinating. When she was abandoned by her adoptive parents in Moscow, she said she  felt like she was in jail, but now believes she was partially responsible, since she had agreed to her parents’ version of events and lied about hallucinating.

Then again, she was just a child at the time.

After two months in the mental hospital, Nina Kostina, who had helped arrange her adoption, rescued Sabrina and brought her back to the United States. Three years later she adopted by another family in North Carolina.  n 2008, Sabrina volunteered for the non profit Mercy Ships, spending two years providing medical care to the poor in Africa. That led to a job at a hospital when she returned to North Carolina. Two years later, she fell in love with  fifth grade teacher Phil Caldwell, whom she met through her church. Before she would agree to marry him, she made him watch the “48 Hours” episode about her first adoptive parents. He told Roberts that he was stunned at what she had gone through. They were married in 2014, and now have three daughters and an infant son.  Sabrina Caldwell has never been diagnosed with any mental or emotional illness, and takes no medication for such disorders. END_OF_DOCUMENT_TOKEN_TO_BE_REPLACED 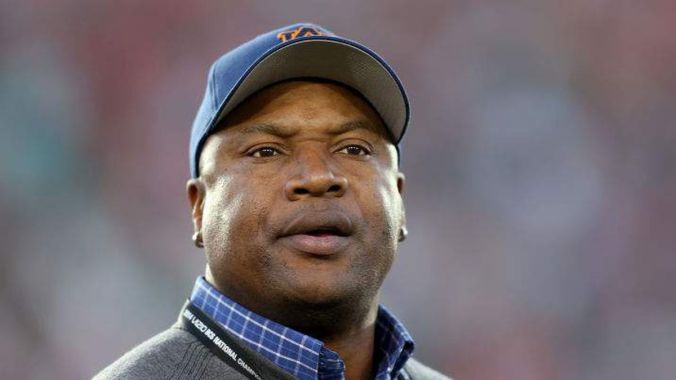 It’s still early on Saturday morning and I’m not quite up to the hard stuff, but this post is easy.

Retired superstar athlete Bo Jackson, who had memorable if tragically shortened careers in both the NFL and Major League Baseball before his hip gave out, has revealed that he flew to Uvalde, Texas three days after the 18-year-old gunman carried out the massacre, donated $170,000 and offered to pay for all funeral expenses for the victim’s families.

Jackson has never been a spotlight hound, and apparently acted because he had spent time in the city and was familiar with it, and because he was touched by the tragedy. The only pro-athlete to be both an NFL and an MLB All-Star told the Associated Press, “I don’t know if it’s because I’m getting old…It’s just not right for parents to bury their kids — it’s just not right.”

END_OF_DOCUMENT_TOKEN_TO_BE_REPLACED

The world governing body for swimming voted to bar transgender women from the highest levels of women’s international competition, bringing expertise, authority and common sense to a debate that had been distorted by the Mad Left’s inexplicable commitment to radical transexual ideology.

FINA administers international competitions in water sports, and now definitively prohibits transgender women from competing unless they began medical treatments to suppress production of testosterone before going through one of the early stages of puberty, or by age 12, whichever occurred later. This is now one of the strictest rules against transgender participation in international sports, and with any luck and some courage elsewhere, it will have the necessary effect on other sports as well. Going through male puberty gives transgender women a massive physical advantage over most athletes born female, as the pool exploits of University of Pennsylvania’s unethical swimming champion Lia Thomas made obvious. END_OF_DOCUMENT_TOKEN_TO_BE_REPLACED

I love this story, and not just because it supports several Ethics Alarms principles, like the duty to confront, the duty to rescue, and the duty to fix the problem.

In Orlando on January 1, 2021, Mrs. Potato restaurant employee Flaviane Carvalho noticed that a young boy was sitting secluded from his parents and a a young girl. Carvalho said the boy was wearing a mask and hoodie as he sat at the table along with two adults and a young girl. She also noticed that he had a scratch in between in his eyebrows and wasn’t eating, even though food had been brought to the table. She asked the table if their food and drinks were all right, and when the one of the adults replied that the boy would eat his dinner at home, Carvalho said she began to think something was seriously wrong.

She did not decide to “minding her own business,” but instead decided that as a proactive and ethical member of society, this was her business. Carvalho stood behind the boy’s parents and held up a note asking the boy if he was OK. When the 11-year-old shook his head, she wrote a second note asking, “Do you need help?”  This time, the boy nodded yes. Carvalho called her boss and then called 911.

Police arrived and questioned the child, who told detectives he had suffered abuse at the hands of his stepfather, identified as Timothy Lee Wilson II.  Wilson was arrested at the restaurant, and the boy’s mother, Kristen Swann, was taken into custody on later that week after the boy made additional disclosures of alleged abuse.