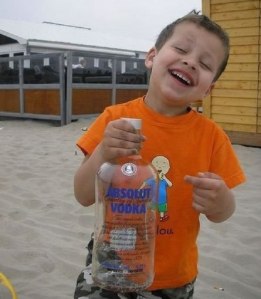 In Longwood, Florida, Patricia-Ann Jackson Denault thought it would be funny to post pictures of her son, 7, drinking whiskey on Facebook, titling it “first shot.” Someone thought it was more alarming than funny, and called the police. Three uniformed officers and Child Protective Services came to her house and interviewed both her and her kids. Denault explained her humor theory, and said she wanted the children “to experience alcohol in a controlled setting.”

They were not impressed. She was arrested and charged with child neglect.

Apparently this is becoming a cause celebre in conservative circles, and example of the nanny state going too far. I don’t see it:

I think these were sufficient reason to check on the welfare of the children in that home, and to be concerned. Should she have been arrested? I don’t know what the children said, or what she told the police. The news reports make Denault sound like a fool, but being a stupid parent does not necessarily make one a dangerous parent. If this is all there is, the arrest is overkill. END_OF_DOCUMENT_TOKEN_TO_BE_REPLACED

Not an hour had passed since I posted my lament about small incidents being blown up into national controversies, and suddenly a perfect Ethics Quiz presented itself on the same trend, from a pre-school yet, just as in the lunch police flap. This one is a tempest in a tea cup, except instead of a tea cup the tempest is in a teeny, tiny beer stein, made out of plastic, that was given to 4-year-old Braden Bulla to represent Germany. His class was studying various countries and their culture, and the teach gave out little plastic artifacts as part of the lesson.

I’m not even sure it qualifies as a stein; it looks exactly like a creamer I’ve had forever. But it was clearly supposed to represent a stein. The children drank apple juice out of these as they learned about Bavaria.  When Braden brought the 2-3 inch plastic thing home, his mother was furious. She told the school and reporters that it is irresponsible to have students  pretend to drink alcohol, even if it is apple juice. “It is entirely inappropriate,” Bulla said. She argued with the teacher and principal, and then pulled her child out of the pre-school. Naturally, someone asked Mothers Against Drunk Driving to get into the act, and they complied, while noting that they couldn’t be authoritative without having been in the classroom. “We would say this: MADD is concerned anytime that a minor is involved in any activity that centers around alcohol consumption,” a spokesperson said. “Even in a case like this one, when there is no actual alcohol.”

So your Ethics Quiz for the day is a multiple choice question:

What best describes the Case of the 4-Year-Old’s Beer Stein? END_OF_DOCUMENT_TOKEN_TO_BE_REPLACED 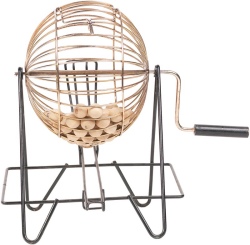 Tom Fuller, who can be perceptive when he isn’t peppering us with the quotations of others (all right, even sometimes when he is) makes a useful distinction in the Comment of the Day, on today’s post about the New Jersey Lottery:

“Don’t get me wrong. I’m no fan of government-sponsored lotteries, and I share all of the concerns about them mentioned above. But a facile slogan like “lotteries are a tax on people who don’t understand math” is, like most facile slogans, too simplistic a way of making the arguments. There are plenty of psychological and economic reasons why even people who understand the math buy lottery tickets that are, quite literally, bad bets. There is lots of research on this; one of the better articles is now 21 years old, but is still cited as a good, brief, and comprehensible overview.”  [You can read it here.]

“Every gamble is a losing bet in the long run; otherwise it wouldn’t be a gamble. The trouble with state-run lotteries is not so much that they exploit those who “don’t get it”; they exploit anyone, even a mathematical genius, who is drawn towards what society generally regards as undesirable actities, thereby sending the same mixed messages as taxes on tobacco and alcohol.” 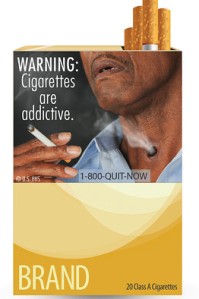 Why stop at this?

I’ve never smoked.  My wife is a smoker and I am worried about her; I also think the tobacco industry is more or less despicable. Nevertheless, I find the new disgust-initiative by the FDA on cigarette package labeling  troubling. If it’s ethical, it only passes muster in a utilitarian balancing formula, and even then I think it opens the door to government abuse.

Thanks to a 2009 law, cigarette makers must add large, graphic warning labels depicting diseased lungs, a man exhaling smoke through a hole in his neck, a baby near a cloud of smoke, a dead body, a man wearing a black t-shirt with “I Quit” written across the chest and three other ugly images to packaging and advertising in the U.S. by October 2012. These will be accompanied by warning labels with messages like “Smoking can kill you” and “Cigarettes cause cancer.” In full, stomach-turning color, the new labels must occupy the top half of the front and back of  cigarette packs, and 20% of any cigarette ad’s space. The labels must also include the number of a national quit line and the current warning labels.

All this, yet the government allows the stuff to be sold. I don’t get it, frankly. If cigarettes are so bad that the FDA feels it has to use tactics this extreme, then it should have the courage to just ban them, like they ban other harmful substances. END_OF_DOCUMENT_TOKEN_TO_BE_REPLACED