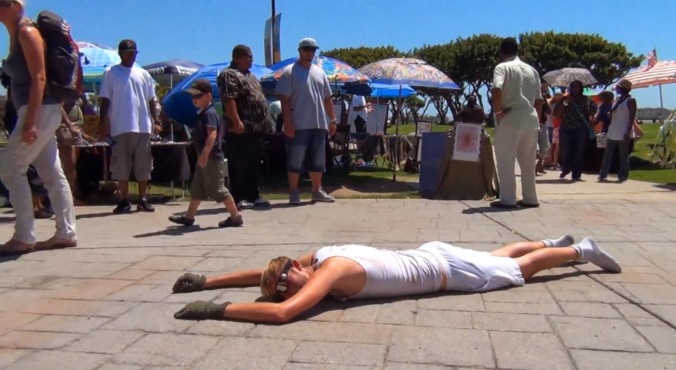 The real mystery is why a law professor would ever conclude that it was a good idea.

Amos N. Guiora, a professor at the University of Utah’s S.J. Quinney College of Law, has authored The Crime of Complicity: The Bystander in the Holocaust, In it, he addresses the   bystander-victim relationship, focusing on the Holocaust. He comes to the remarkable conclusion that a society cannot rely on morality, ethics and compassion alone to move its members to come to the assistance of another human being in danger. He insists that it is a legal issue, and that society should make the obligation to intervene a legal duty, and  non-intervention a crime.

Wow. Here is a shining example of how bias can make smart people not only stupid, but blind. I have not read the book (I did listen to this podcast), because his contention is self-evidently anti-ethical, and typifies the attitude that has led to the criminalizing of so much in U.S. society that rigorous enforcement of the law would make the nation a police state. The Holocaust is the worst possible starting point for this issue: to state the most obvious absurdity, if the government is the victimizer, who would enforce the laws against not assisting victims? I get it, though: the professor is angry and bitter that the international community and Christians didn’t forcefully intervene before Hitler was on the verge of liquidating Non-Aryans from the face of the earth. But no law within imagination would have prevented this unique catastrophe. Nor would the kinds of laws he advocates improve the fate of most victims, or be practically enforceable.

Ethics Alarms has discussed the duty to rescue often and in great detail, and often notes, “when ethics fail, the law steps in.” The second stage of that statement is “and usually makes a mess of it.”  This is the compliance/ethics divide so exposed by corporate compliance rules, regulations and laws, which have done little to improve corporate conduct, and have provided cover for complainant and creative misconduct, like Wall Street leading up to the 2008 crash. Giving up on the teaching and strengthening of ethical values in society in favor of mandating what the state regards as “right” by inflicting punishment degrades society and insults humanity, treating it as if it is incapable of learning to care about others and society at large.  It also seldom works. The duty to rescue exists, but society must encourage and foster it by nurturing ethical society members, not by threatening them with punishment.

Society cannot mandate compassion—a law requiring charity?—kindness—a ticket for not rescuing an abandoned dog or helping a blind man across the street?—honesty–fines for telling a date that you’ll call the next day when you won’t?—-or courage —Sweep that child up whose in the path of a semi, or to jail. Of course it can’t. Increasing reliance on the state to force what a powerful group regard as “good behavior” is the catalyst of the current totalitarian bent of the American Left. Doesn’t the professor realize that what he is advocating leads directly to the Holocaust, and not away from it?

This is one slippery slope that needs a fence around it. END_OF_DOCUMENT_TOKEN_TO_BE_REPLACED