I should be writing an evening ethics potpourri, but I’m watching the Red Sox, who have been terrible, play the Mets, who I detest, so I’m too distracted. But while I was sitting here, two baseball ethics issues popped up. I can chew gum and walk at the same time, but I can chew gum and think about gum.

The first issue is schadenfreude-related. John McNamara died today in his eighties. He’s the Boston Red Sox manager most fans, including me, hold responsible for the Sox losing to the Mets in the 1986 World Series`. I’m sure Johnny Mac, as he was called, was a wonderful husband and father, but he was a lazy, terrible manager who got jobs when lazy, terrible team owners wanted to choose an organization man who wouldn’t rock the boat. He was incompetent, basicly, like so many middle managers in conventional businesses who take jobs away from better, harder-working, smarter people because they know how to play the right games and suck up to the right people. As a baseball manager his stock in trade was inertia. He had a flat learning curve, assumed problems would solve themselves eventually, and never took risks.

He was the epitome of a hack, in short. Such employees and professionals are a blight on society and civilization, but it’s not intentional, and not exactly their fault that there are too many of their breed, and that collectively they make life for the rest of us more nasty, brutish and short than it should be. END_OF_DOCUMENT_TOKEN_TO_BE_REPLACED

Ah! After a long, long weekend, I feel wefweshed!

a) From the Wall Street Journal:

“Transportation Secretary Elaine Chao has retained shares in a construction-materials company more than a year after the date she promised to relinquish them.Shares of the company, Vulcan Materials Co. , the country’s largest supplier of the crushed stone, sand and gravel used in road-paving and building, have risen nearly 13% since April 2018, the month in which Ms. Chao said she would be cashed out of the stock, netting her a more than $40,000 gain.”

I have a personal bias against Chao, which I have described before, so I’ll just leave this as a res ipsa loquitur item. Her husband, of course, is GOP Senate leader Mitch McConnell.

b) I would rank Chao as more palatable than this hack, however, who should be fired outright, and kicked on her way out the door.

In an apparent attempt to show that Dr. Ben Carson, HUD Secretary because he is black and was nice to Donald Trump during the GOP debates, is NOT the most unqualified official at his department,  HUD regional administrator Lynne Patton defended Carson’s cringingly inept recent performance (“Is there any other kind?” Jack Nicholson’s Colonel Jessup  might ask) before Congress  by retweeting a message praising Dr. Ben while mocking Alexandria Ocasio-Cortez. Then she  took to Facebook to say  that her comment “may be a Hatch violation. It may not be. Either way, I honestly don’t care anymore.”

Nice. A government official who announces publicly that she doesn’t care if she violates the law! Then she responded to criticism of that post with a classy tweet that said, “What part about “I don’t give a shit” don’t you understand? “

“The best people.” You could throw a rock into a crowd and have a good chance of finding better people for government service than Patton. If you are keeping score, the ethics breaches here are all six “Pillars of Character”— Trustworthiness, Responsibility, Fairness, Respect, Caring and Citizenship, distributed among Patton, HUD, and the President. You can’t do much worse. END_OF_DOCUMENT_TOKEN_TO_BE_REPLACED 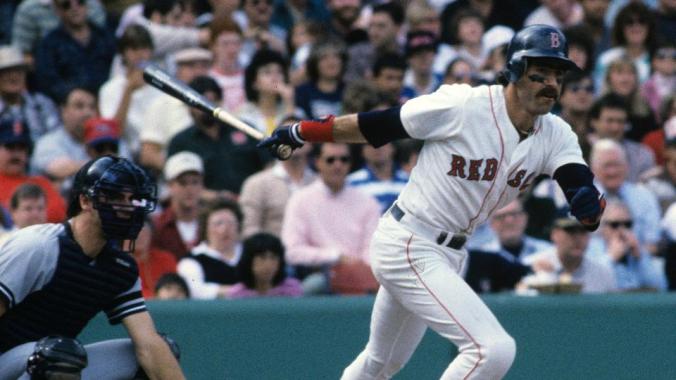 Even many non-baseball fans know his name. The first baseman gained cultural infamy in 1986, when Mookie Wilson hit a slow bouncer that found its way through Buckner’s legs, winning Game 6 of the World Series for the New York Mets after the Boston  Red Sox had appeared certain to finally win their first Word Series tittle since 1918. Buckner became an object of ridicule nationally and a scapegoat in Boston, which had reached its limit in close calls and near misses after dramatic final game  defeats in 1946, 1948, 1949, 1967, 1975 and 1978. (Game 6 wasn’t the final game in ’86: the Sox had to blow a three-run lead in Game 7 to lose that Series. Never mind: the surviving narrative was that it was still all Bill’s fault).

Knowledgeable and fair Red Sox fans—like me—never blamed Buckner, and condemned those who did. Indeed, Buckner’s late season offensive heroics probably got the Sox to the Series in the first place. Playing on fragile, oft-injured legs, he endured painful daily therapy to allow him to stay in the line-up, even though he was barely mobile. Boston manager John McNamara routinely replaced him in the late innings with defensive specialist Dave Stapleton. END_OF_DOCUMENT_TOKEN_TO_BE_REPLACED

Today the victorious Boston Red Sox took their now traditional duck boat parade through Boston and down the Charles River, so even for the Sox, the 2018 season is officially done.  My job isn’t however, because there were two striking examples of moral luck and consequentialism during the World Series, and apparently I was the only one who noticed.

I. The “Bad News Bears” moment.

When Red Sox Game 4 starter Eduardo Rodriguez surrendered what seemed at the time to be a decisive three-run homer to Yasiel Puig, putting the Sox behind in the 6th inning 4-0, he angrily hurled his glove to the mound. Commentators joked about how he resembled the Bad New Bears’ combative, potty-mouthed shortstop Tanner in the Little League classic, but other than the ribbing, nobody criticized “E-Rod.” Indeed, his manager, Alex Cora, exonerated him for the home run, saying that he, the manager, screwed up by letting his tiring pitcher face the dangerous Puig.

Yet earlier this season, Boston reliever Carson Smith, regarded as an important member of the Red Sox relief squad, threw his glove in the dugout after giving up a home run, and partially dislocated his shoulder. He was lost for the season, and both team officials and Boston sportswriters blamed Smith for his injury. He injured himself you see. It was stupid and selfish, and showed him to be unprofessional and untrustworthy. Many thought Smith should be fined, or even released. Yet it was a completely freak injury. It wasn’t as if Smith had punched a wall or a water cooler. Baseball players throw their gloves all the time, and I’ve never seen it injure anyone. So why was Carson Smith treated as a pariah for throwing his glove, but Eddie Rodriguez doing the same thing shrugged off? The only reason is that Smith’s angry gesture happened to injure him , which nobody, including Smith, could have predicted. In fact, Rodriquez was more, much more, irresponsible than Smith, because he knew throwing a glove could cause an injury. He knew, because it happened to Smith. END_OF_DOCUMENT_TOKEN_TO_BE_REPLACED 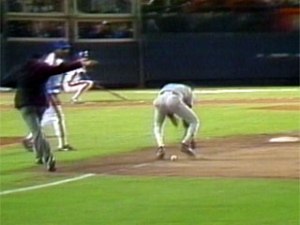 Bill Buckner’s error: he didn’t kill anyone, but to many Red Sox fan, this was worse.

“I did not want [Simpson] to try on the evidence gloves. I never did,” failed O.J. prosecutor Marcia Clark tells”Dateline NBC” in a TV special airing this week. “That was [Darden’s] call. … I was miserable from the moment that Chris said, ‘No, I’m doing this.’ And I never expected anything good to come of it.”

Unbelievable. How petty, unfair and low of Clark at this late date to start trying to blame others on the prosecuting team for losing a murder case that should have been won! It is decades later, the story is part of U.S. legal, racial and cultural lore, and everyone has known that Darden was tricked into the bloody gloves trap by Johnnie Cochran for almost all of that time. There is no justification for Clark to turn on her colleague now. END_OF_DOCUMENT_TOKEN_TO_BE_REPLACED 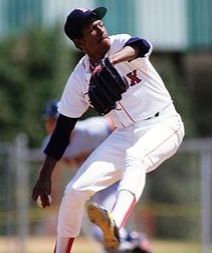 And another mystery solved: Why was he called "Oil Can"? Because apparently that's what he has on top of his neck instead of a head.

Former Red Sox pitcher Dennis “Oil Can” Boyd, one of my favorite characters when he was active, admitted this week that he was stoked up on cocaine when he pitched more often than not. “Oh yeah, at every ballpark. There wasn’t one ballpark that I probably didn’t stay up all night, until four or five in the morning, and the same thing is still in your system,” Boyd told WBZ NewsRadio 1030’s Jonny Miller in Fort Myers, Florida, where the Red Sox are about to start Spring Training.  “Some of the best games I’ve ever, ever pitched in the major leagues I stayed up all night; I’d say two-thirds of them. If I had went to bed, I would have won 150 ballgames in the time span that I played. I feel like my career was cut short for a lot of reasons, but I wasn’t doing anything that hundreds of ball players weren’t doing at the time; because that’s how I learned it.” END_OF_DOCUMENT_TOKEN_TO_BE_REPLACED 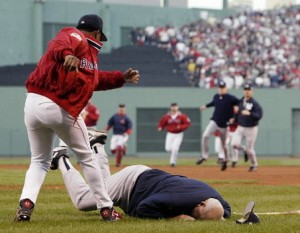 Bleacher Reports is an enjoyable sports website, and it gives opportunities to aspiring writers and bloggers, some of whom are quite talented.  In addition to typical opinion pieces and reporting, the site has a fondness for lists, often trivial to the extreme, like “The 50 Ugliest Athletes of All Time.” The titles are all misnomers, because there is almost never any criteria given for the choices or their relative ranking. An accurate title would be, “The Fifty Athletes I Think Are The Ugliest.”  And of course, who cares? (Don Mossi, by the way, was the ugliest athlete ever, no matter what anybody says.)

A recent list, however did bother me. It is called “The Fifty Most Unforgivable Acts in Baseball History,“ and much of the problem with it lies in the title itself. If you are going to write about history, there is a duty perform diligent research, even for a silly online list. Misrepresentations online have a large probability of misleading people.  The title is a misrepresentation, like “The 50 Ugliest Athletes,” but unlike that list, there is some harm done. The list isn’t close to complete; it isn’t consistent; it isn’t well-researched. I’d bet that the author, Robert Knapel, wrote it off the top of his head.  Anyone who looked at the list and assumed, as the author represents, that these are truly the low points—“the dark side,” as the author puts it—of major league baseball would be seriously misinformed.

There are unequivocally, probably universally recognized incidents and events that are infinitely worse that most of the items on the list.  Just a  few samples: END_OF_DOCUMENT_TOKEN_TO_BE_REPLACED

Over at the Huntington Post, Jason Linkins praises the edict of NBC News chief Steve Capus to curb network Olympic coverage use of the video showing Nodar Kumaritashvili’s fatal luge run. “I’m glad this decision has been reached,” Linkins writes. “The video of Kumaritashvili’s fatal luge run is difficult to watch and I do not recommend that you do so. …Here’s hoping Steve Capus will remember having made this choice come September and break with MSNBC’s grim and pointless tradition of replaying the events of September 11, 2001 in real time.”

Linkins presumably regards Capus’s decision as “responsible broadcasting.” My question is, “What’s responsible about it?” END_OF_DOCUMENT_TOKEN_TO_BE_REPLACED