Yesterday, the Baseball Writers’ Association of America (BBWAA) announced that group will remove the name of Kenesaw Mountain Landis from the American League and National League Most Valuable Player plaques presented each year to the MVP winners.. Landis has been honored with having the plaques bear his name since 1944, the year of his death. He didn’t do much: he only probably saved the National Pastime at its darkest hour.

It was Landis, a famously tough and uncorruptible federal judge, whom the baseball owners turned to in 1920 in the midst of the Black Sox scandal. The scandal involving the Chicago White Sox throwing the World Series in 1919 under the influence of bribes from gamblers to some key players, including star Shoeless Joe Jackson. Even though the eight accused players were acquitted in their trial, Landis, who remained a judge for two years while serving as Commissioner, banned them all from baseball, laying down a rule that participating in efforts to corrupt the game through gambling or having knowledge of other players doing so and not acting to stop it were grounds for permanent exile. Eighteen players in all, like the infamous Hal Chase, were banned by Landis, who remained commissioner for the rest of his life.

Landis had a memorable career as a judge before coming to baseball’s rescue: in 1907, he thrilled the man who appointed him, Teddy Roosevelt when he fined Standard Oil of Indiana more than $29 million (about $800 million in 2020) for violating federal laws forbidding rebates on railroad freight tariffs.

Why, then, is Landis suddenly the victim of metaphorical statue-toppling? That was a clue: in the wake of the George Floyd Freakout and The Great Stupid, the baseball writers, which are thoroughly infested with self-righteous and semi-ignorant would-be social justice warriors like this guy, blame Landis for not “doing more” to desegregate baseball before Jackie Robinson and Branch Rickey finally did the trick, three years after Landis died. In other words, he’s being punished for not seeing clearly what everyone sees almost 80 years later, and not actively fighting for a cause that neither baseball nor American society may have been ready for.

END_OF_DOCUMENT_TOKEN_TO_BE_REPLACED

Last night, incomplete fragments of news came through the baseball media that Chicago White Sox pitching ace Chris Sale had been pulled from his scheduled start against the Tigers. Was he about to be traded? No, we learned that there had been a “non-physical” altercation with someone in the White Sox front office. Huh? What did that mean?

It turned out that the truth was stranger than any speculation. Sale, we learned, had refused to wear a retro White Sox uniform during a “Turn Back The Clock” promotion that nigh, and to ensure that he wouldn’t have to, he cut up all the vintage uniforms, using a scissors and a knife, while the rest of the team was taking batting practice.

As soon as I heard this, I told my wife,”I bet I know exactly which uniforms the team was supposed to wear.” I was right: the White Sox promotion involved giving out free facsimile 1976 uniform jerseys to the first 15,000 game attendees, with the team wearing the infamous fashion abortion perpetrated on baseball by puckish former White Sox owner Bill Veeck, the same iconoclast who sent a midget up to bat in a real game.

Here are those uniforms, almost unanimously agreed-upon by all critics as the silliest baseball garb ever to appear on a Major League player (that’s Veeck in the middle; the ones on the left are the uniforms in question): 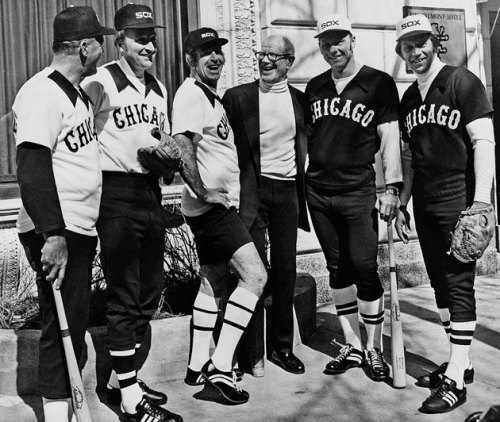 It is recorded that the players and the fans hated the 1976 uniforms, which were quickly discarded, especially the version with the shorts, which only appeared in one game. No wonder Sale was upset.

Now to the ethics issues: END_OF_DOCUMENT_TOKEN_TO_BE_REPLACED

Bleacher Reports is an enjoyable sports website, and it gives opportunities to aspiring writers and bloggers, some of whom are quite talented.  In addition to typical opinion pieces and reporting, the site has a fondness for lists, often trivial to the extreme, like “The 50 Ugliest Athletes of All Time.” The titles are all misnomers, because there is almost never any criteria given for the choices or their relative ranking. An accurate title would be, “The Fifty Athletes I Think Are The Ugliest.”  And of course, who cares? (Don Mossi, by the way, was the ugliest athlete ever, no matter what anybody says.)

A recent list, however did bother me. It is called “The Fifty Most Unforgivable Acts in Baseball History,“ and much of the problem with it lies in the title itself. If you are going to write about history, there is a duty perform diligent research, even for a silly online list. Misrepresentations online have a large probability of misleading people.  The title is a misrepresentation, like “The 50 Ugliest Athletes,” but unlike that list, there is some harm done. The list isn’t close to complete; it isn’t consistent; it isn’t well-researched. I’d bet that the author, Robert Knapel, wrote it off the top of his head.  Anyone who looked at the list and assumed, as the author represents, that these are truly the low points—“the dark side,” as the author puts it—of major league baseball would be seriously misinformed.

There are unequivocally, probably universally recognized incidents and events that are infinitely worse that most of the items on the list.  Just a  few samples: END_OF_DOCUMENT_TOKEN_TO_BE_REPLACED