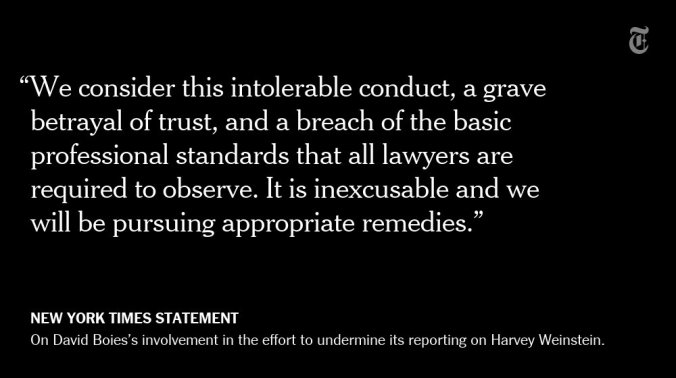 There are a lot of ethics issues, legal and otherwise, flying around in the shocking—this really is shocking—revelation that lawyer Al Gore’s Supreme Court lawyer (and loser) David Boies was working to help Harvey Weinstein intimidate and discredit the women who were preparing to accuse him of sexual harassment, sexual assault, and rape.

The New Yorker reports in an investigative reporting piece that the Boies firm was retained by Weinstein, and on his behalf hired Black Cube, an investigative company run by former Israeli intelligence agents to prevent the publication of abuse allegations by creating profiles on the targeted accusers, often using pretexting–that is, lies— to gain access to proprietary information. Black Cube’s work included psychological profiles and sexual histories of the potential Weinstein accusers. The engagement with Black Cube  was presumably run through Boies Schiller Flexner  to place the shady matter under attorney-client privilege.

David Boies personally signed the contract with Black Cube, which, according to the New Yorker, was to obtain ” intelligence which will help the Client’s—that is, Weinstein’s— efforts to completely stop the publication of a new negative article in a leading NY newspaper” and to “obtain additional content of a book currently being written [that] includes harmful negative information on and about the Client.”

Did you see “Michel Clayton,” where George Clooney played a law firm’s “fixer”? That’s what Boies was doing here. “Fixing.” And fixing is a dirty business.

That “leading NY newspaper” was and is the New York Times, which, as we now know, was readying its own sensational story regarding the accusations against Weinstein.The New York Times was also a client of Boies Schiller Flexner, though on unrelated matters, hence the statement above. Unsurprisingly, the Times has sacked Boies and his boys.

[Aside: Here’s a lawyer ethics practice tip. If a client asks you to contract with a company called “Black Cube,” “CHAOS,’ “The Legion of Evil,” “The Black Hand,” or “Murder, Inc.”, just say no.]

Some ethics questions and answers: END_OF_DOCUMENT_TOKEN_TO_BE_REPLACED