President Trump was wrong to keep claiming that voter fraud was responsible for his 2020 election loss; indeed he was wrong to be the one to question the fairness of election at all. However, the constant mantra in the mainstream news media that his complaints that the election was “stolen,” “rigged” or “fixed” are “false” meets the classic standard for “protesting too much.”

The 2020 election was rigged, as I explained here. The rigging by the mainstream media began from the second Donald Trump was elected, causing Democrats, progressives and especially journalists to abandon tradition, sound democratic principles, fairness, responsibility and ethics to do everything in their power to undermine the elected President of the United States, because they didn’t vote for him, didn’t like him, and refused to accept Hillary Clinton’s well-earned defeat. Out of this, what I have (correctly) termed the worst ethics breach in our society since at least the Second World War, we got the succession of Big Lies and the series of plots to remove Trump from office, including two unjustified and unethical impeachments.

I doubt that any President in our history could have overcome the deliberately biased news coverage and the barrage of fake negative news Donald Trump was attacked with for four straight years. It’s impossible to say, since no elected President, not even Richard Nixon, was subjected to anything similar. It is also impossible to say, it must be emphasized, that the despicable and unethical journalism used to undermine Trump actually caused his loss. This is, however approximately the same argument the defense in the Derek Chauvin trial is making. The media’s knee was on the President’s neck, but there were other things that might have killed his Presidency. It does not make the news media’s conduct any less wrong.

END_OF_DOCUMENT_TOKEN_TO_BE_REPLACED

In response to a question in a newly released CNN poll, a majority of football fans responded that the fact that the NFL intentionally withheld from its players evidence that repeated  concussions were inevitable despite the supposed protection provided by equipment, and that this would lead in many cases to devastating premature cognitive damage to players which would leave them disabled, depressed, violent, demented and/or suicidal until their early deaths didn’t trouble them at all, as long as they got their weekly Sunday football fix.

All right, that’s unfair. The results actually just showed that only 36% of respondents think that the NFL’s handling of the concussion issue has caused them to view the pro football league less favorably. No, on second thought, it’s not unfair at all.

I’m sure the NFL honchos who are determined to keep their billion dollar profit machine purring away, powered by the game’s consumption of the minds and bodies of young men lured by a short-term bonanza of fame and bucks, are whooping it up in their park Avenue suites. Yup, they did it! They have successfully converted much of America into crass, blood-thirsty sadists who are only different in degree from the Romans who cheered on Nero’s various bloodsports. END_OF_DOCUMENT_TOKEN_TO_BE_REPLACED

Today the National Football League announced the following response to the results of its investigation of bounties being offered and paid by the New Orleans Saints to its players for injuring key opposition players in games. From the NFL press release:

“Commissioner Roger Goodell notified the New Orleans Saints today of the discipline that will be imposed on team management for violations of the NFL’s long-standing “bounty” rule that endangered player safety over a three-year period.

“Discipline for individual players involved in the Saints’ prohibited program continues to be under review with the NFL Players Association and will be addressed by Commissioner Goodell at a later date. The program included “bounty” payments for “knock-outs” and “cart-offs,” plays on which an opposing player was forced to leave the game. At times, the bounties even targeted specific players by name.

“The NFL’s extensive investigation established the existence of an active bounty program on the Saints during the 2009, 2010, and 2011 seasons in violation of league rules, a deliberate effort to conceal the program’s existence from league investigators, and a clear determination to maintain the program despite express direction from Saints ownership that it stop as well as ongoing inquiries from the league office.

“We are all accountable and responsible for player health and safety and the integrity of the game,” Commissioner Goodell said. “We will not tolerate conduct or a culture that undermines those priorities. No one is above the game or the rules that govern it. Respect for the game and the people who participate in it will not be compromised.”

“A combination of elements made this matter particularly unusual and egregious,” Commissioner Goodell continued. “When there is targeting of players for injury and cash rewards over a three-year period, the involvement of the coaching staff, and three years of denials and willful disrespect of the rules, a strong and lasting message must be sent that such conduct is totally unacceptable and has no place in the game.”

…Based on the record, Commissioner Goodell has imposed the following discipline on Saints management: END_OF_DOCUMENT_TOKEN_TO_BE_REPLACED 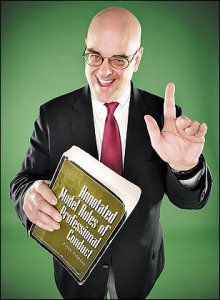 Fortunately, you won't have to look at me...

I’ll be “appearing” on NPR’s “Tell Me More” tomorrow with Michel Martin, discussing the NFL’s bounty scandal and maybe another issue or two. Check local times in your area, or just plan on rearranging your sock drawer. 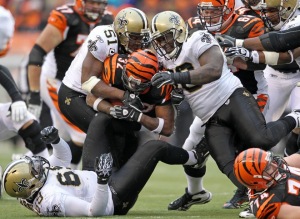 The last Super Bowl was phenomenally successful, as its audience size shattered previous records. Yet for many years, I have not been able to enjoy the sport, because of the unethical conflict at its core. Pro football’s appeal and swagger is based on violence, and we now know that the violence damages its players to an unacceptable extent. The players are paid both to accept the crippling and often-life shortening abuse, as well as administer it. For this former fan, that makes football too close to boxing from an ethical perspective. If the NFL is paying  players to do permanent harm to each other, then so are the fans that pay the NFL.  Sorry: there are too many other forms of entertainment that don’t require me to endorse and subsidize brutality. Thus I was not surprised to read this, in the New York Times:

“During the past three seasons, while the National Football League has been changing rules and levying fines in an effort to improve player safety, members of the New Orleans Saints’ defense maintained a lucrative bounty system that paid players for injuring opponents, according to an extensive investigation by the N.F.L. The bounty system was financed mostly by players — as many as 27 of them — and was administered by the former defensive coordinator Gregg Williams, who also contributed money to the pool. The N.F.L. said that neither Coach Sean Payton nor General Manager Mickey Loomis did anything to stop the bounties when they were made aware of them or when they learned of the league’s investigation.  According to the league, Loomis did not even stop the bounties when ordered to by the team’s owner. “

This practice is not only unethical and against NFL rules, it is criminal.  END_OF_DOCUMENT_TOKEN_TO_BE_REPLACED