I’m giving a Zoom CLE seminar, 3 hours, for legal ethics credits, for the D.C. Bar this evening. If you are a lawyer, you might want to participate. The program is “Clarence Darrow’s Legal Ethics Lessons for Today’s More Ethical Lawyers 2021,” and features, as Darrow, my friend and long-time D.C. theater star Paul Morella. (You may recall him as a sinister young law firm associate in “The Pelican Brief.”) I do the ethics stuff.

Paul and I have done constantly evolving versions of this seminar for years, an adaptation of a one-man show I wrote for my late, lamented Arlington, VA theater company 20 years ago. Paul has continued to perform the show all over the country.

The link is here.

Now back to our usual scheduled programming…. 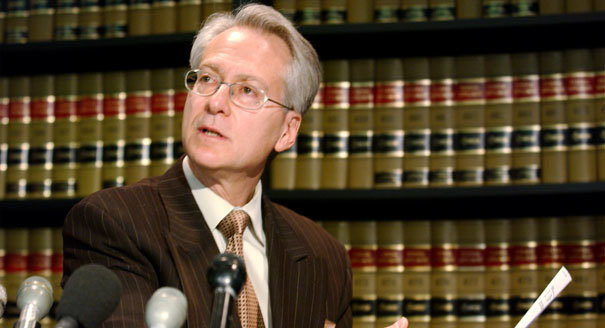 Attorney Larry Klayman was familiar presence during the Clinton administration.  The founder of Freedom Watch and Judicial Watch and conservative gadfly  helped bring dozens of cases against Bill Clinton, the White House, and various staff members and agencies, uncovered some damning documents in FOIA requests, filed government ethics complaints, and continued to champion conservative causes after he left Judicial Watch in other hands. He  represented  former Arizona Sheriff Joe Arpaio and  state’s rights activist rancher Cliven Bundy, among other clients. Now the District of Columbia Court of Appeals Board on Professional Responsibility Ad Hoc Hearing Committee has handed down a 183-page report finding that Klayman breached the D.C. professional ethics rules, recommending that he be suspended from the practice of law for 33 months, and have  he prove his rehabilitation and fitness to gain reinstatement.

According to the report, Klayman represented Elham Sataki, whom he helped file a 2010 sexual harassment suit against her employer, Voice of America.  Klayman persuaded Sataki to move to Los Angeles and offered to pay her housing and living expenses, telling Sataki she could later reimburse him. She took him up on the offer, but when  Sataki rejected Klayman’s overtures for a romantic relationship,  the findings state, the lawyer raised his fee demands to continue representing her sexual harassment claim. As a result, the report concludes, Sataki did not pursue her case. END_OF_DOCUMENT_TOKEN_TO_BE_REPLACED

Yesterday traffic caused me to arrive a bit later than usual at my monthly gig as the instructor in the legal ethics portion of the D.C. Bar’s mandatory orientation session for new admittees. It was after 9 AM (my segment starts at 9:20), and as I approached the glass doors to the lecture hall lobby, I saw a distraught women angrily berating one of the D.C. Bar staff. I knew instantly what was going on.

You see, the courts approving the program insist that every attendee be there at the start: the doors close at 9, and anyone arriving late, no matter what the reason, is out of luck. They can’t attend the session, can’t get credit for it, and have to return the following month. That rule is on the website and in all communications with the Bar, along with the warning that there are no exceptions, and no effective excuses. Every month, someone misses the deadline; every month, that person goes ballistic. This women, however, was remarkable.

She had flown to D.C. on the redeye, she said. Her cab was stuck in traffic, and when she arrived in the cavernous Reagan Building where the day-long course takes place, she had ten minutes to spare. Unfortunately, the Reagan Building eats people. I have wandered its halls lost many times. I keep expecting to encounter a bearded, Ben Gunn-like figure who grabs my pant leg and jabbers about how he’s been trapped by the bewildering signage, and has been living off of Cub Scouts since 1992. The woman made it to the right hall in just 12 minutes, which is impressive without a GPS. But she was still two minutes late. END_OF_DOCUMENT_TOKEN_TO_BE_REPLACED

I’ve been defending my profession a lot here lately, but I also recognize that there is a very good reason why such incidents as the surprisingly generous sentence in the “Affluenza” case and the drug court judge who suffered an alcoholic relapse on the bench are wrongly interpreted as proof of inequities and double standards in the legal system. The reason is that those who oversee the system do inexplicable things that appear to the outside world as not only a lack of integrity but also the apparent inability to realize how such conduct undermines the public trust.

Both of these recent news stories are cases in point:

I. The Imaginary Government Lawyer

In 2012, the Nebraska state supreme court disbarred lawyer David Walocha for not paying his bar dues and proceeding to practice law for 13 years with a suspended license. At the end of 2013, the District of Columbia Bar had to decide what to do with former Justice Department attorney Laura Heiser, who practiced 21 years with a suspended license in the District. What was her punishment? She received an informal admonition, which is the least severe form of disciplinary action.  END_OF_DOCUMENT_TOKEN_TO_BE_REPLACED