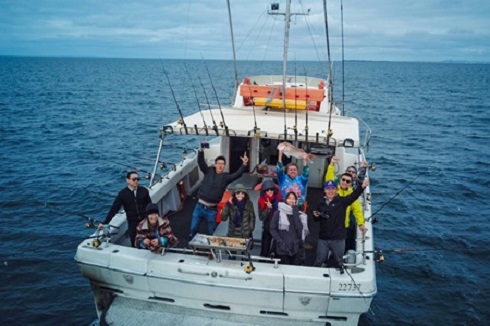 On one of Sunday’s talking head shows, Rep. Gerald Nadler (D-NY), whom you might remember pre-diet as one of the most vociferous defenders of President Clinton during the House impeachment hearings, said that there was no question that President Trump had obstructed justice. Asked why, then, the House wasn’t seeking impeachment, Nadler said, “We don’t have the facts yet.” Yes, it’s that again: “the resistance” is positive that the President broke the law somewhere, some how, without any evidence that he broke the law. They just know, that’s all. I’ve been reading Trump-deranged commenters making the same set of arguments for three years now, usually followed by, “If he’s innocent, what’s he afraid of?,” a statement that sounds more comfortable in German, Russian, or Chinese.

This is not how our justice system or our political system is supposed to work, nor is it a proper use of Congress’s investigation and oversight powers. As as been typical of the Democrats’ Bizarro World reasoning, Rep. Elijah Cummings called the President’s defiance an attack on the Separation of Powers. No, it is an attack on the Separation of Powers when Congress cynically sets out to interfere with the ability of the Executive to discharge his Constitutional duties by launching endless, unjustified investigations. In particular, the President is performing a national service by refusing to allow Congress to demand his tax returns. The tax returns of all American must be confidential and private. If Congress can demand and acquire anyone’s tax returns based on speculation alone, then no citizen’s tax documents are safe. 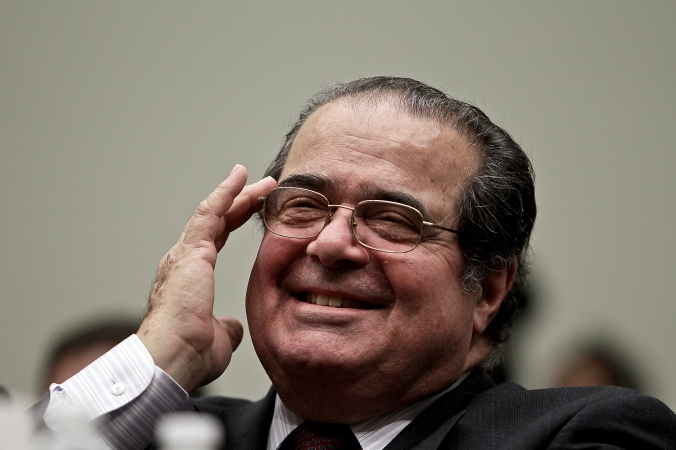 —The recently departed Antonin Scalia, speaking to Obama advisor David Axelrod seven years ago, as President Obama was faced with making his first Supreme Court nomination upon the retirement  of Justice Souter.

Kagan, of course, was finally chosen to fill the second SCOTUS vacancy. Axelrod treats this conversation as somehow shocking, which I guess it would be to a political operative like him, to whom partisan warfare is everything,. Yet Scalia, who was known to be good friends with several of the more liberal members of the court, including Kagan, displayed with that private statement to Axelrod the professional attitude I have heard from many lawyers, and that perfectly describes my own. What is important to have on the Supreme Court are the best and most competent legal minds available. Assuming such judges also possess integrity, the third branch of the government will be in good hands. END_OF_DOCUMENT_TOKEN_TO_BE_REPLACED

“Voters do not give a shit. They do not even give a fart… Find me one persuadable voter who agrees with HRC on the issues but will vote against her because she has a non-archival-compliant email system and I’ll kiss your ass in Macy’s window and say it smells like roses.”

Begala, just in case you’ve forgotten, was the most loathsome of Bill Clinton’s paid defenders—deceitful, smug, arrogant, Machiavellian. I’ll confess my bias: along with Karl Rove, David Axelrod, Dick Morris, James Carville and his wife, Mary Matalin, and others whose names I am mercifully unaware of so far, Begala and his species are the scourge of the political culture as well as democracy itself. Their stock in trade is misrepresentation, and their objective is to make Americans ignorant, uncritical, lazy, compliant, and gullible. The contempt they have for Americans is palpable, as in Begala’s quote. END_OF_DOCUMENT_TOKEN_TO_BE_REPLACED 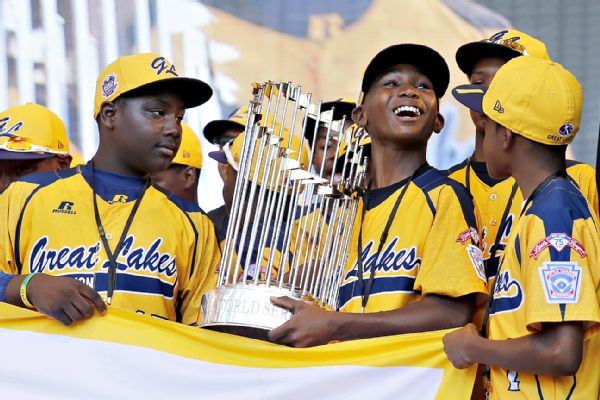 When the Tom Brady/ Bill Belichick/New England Patriots cheating issue was at high pitch [Aside: Notice how we have heard nothing about this at all since the Super Bowl, which the Patriots won. This is why NBC thinks it will get away with not firing Brian Williams…both the news media and the public have the attention span of closed head injury victims, especially when it comes to liars, cheaters and betrayal. They call this phenomenon “America’s belief in redemption.” It is actually is a product of America’s crippling domination by chumps, dolts, suckers….and people who are liars and cheats themselves.], a friend of mine brushed it all off saying, “It’s a game.” Well, children learn a lot about ethics from games, and if they learn that adults think cheating is acceptable (never mind that a billion dollar business is hardly just a “game”), they will cheat in their games, and later in life.

Today we learn that the inspiring 2014 Little League Champions, the Jackie Robinson West team that was the first all-African-American team to win the tournament, has been stripped of all of its wins, including those from its Great Lakes Regional and United States championships. As a result, the United States championship has been awarded to Mountain Ridge Little League from Las Vegas.

A Little League investigation revealed that the Jackie Robinson team, which was supposed to field a team exclusively from the Chicago South Side, secretly used an expanded boundary map. Team officials conspired with neighboring Little League districts  to build what was essentially an all-star team by acquiring players from well beyond the South Side. END_OF_DOCUMENT_TOKEN_TO_BE_REPLACED

The last couple of days have added more embarrassing examples of desperate supporters of the Democrats, President Obama and/or the Affordable Care Act thoroughly disgracing themselves by adopting rationalizations, distortions, denial, tortured reasoning and worse to avoid holding President Obama accountable for intentionally misleading the American people for more than three years regarding whether they could keep their healths plan if they liked them, “period.”

Two aspects of this disgusting spectacle are remarkable. One is that there is such a wide and creative variation among the integrity-defying tactics taken by this distinguished assortment of pols, elected officials, hacks, flacks, pundits and journalists. The other is that after this is all over, nearly half the American public will still loyally insist on trusting the promises and pronouncements of this very same group, though they proved themselves, in this episode, untrustworthy beyond a reasonable doubt. The first of these developments is surprising. The second extinguishes all hope.

Now the latest additions to the list of shame: 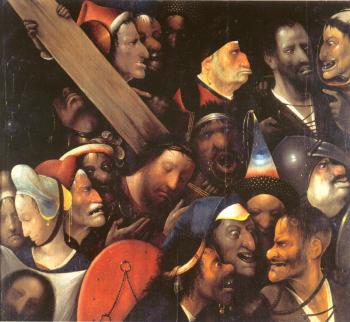 This is a mercurial story, several in fact, but one of its most valuable uses is to allow us to sort out various individuals and institutions for their trustworthiness and character based upon their words and conduct regarding the multiple scandals hurtling around Washington. 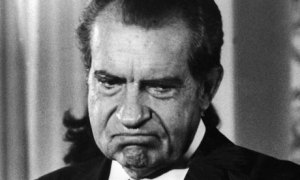 Consider these post-debate quotes from various key figures in the Obama campaign:

” The President did a good job explaining his positions, but give credit where credit is due. Governor Romney had a great night. He was focused and clear, and obviously connected with the audience. He’s a capable adversary, as we always knew. President Obama can and will equal and surpass his performance in the coming debates.”—David Axelrod

” Governor Romney proved himself to be a formidable debater, and the President will have to be more aggressive in countering his arguments, which he certainly has the ability and the ammunition to do.”—Stephanie Cutter

“I didn’t feel I had a poor debate, but I obviously need to have better ones. Sometimes the other guy just beats you, and you have to accept that, tip your hat, and win the next time.”—President Obama

If you haven’t seen these respectful, gracious quotes, all typical of the comments of past candidates and their staff after debate performances that were seen as falling short of their opponents’, there’s a reason. Nobody on the Democratic side, including Obama himself, nor most of the media pundits except those who would be fairly classified as conservative, have been willing to give Mitt Romney any recognition for a well planned, well-executed, professional and compelling debate. “What happened?” Diane Sawyer asked the President. “I had a bad night,” he replied. Romney, you see, had nothing to do with it. END_OF_DOCUMENT_TOKEN_TO_BE_REPLACED

The faith-based institution mandate set the train on its fateful journey,  Rush Limbaugh sent a second locomotive into the stalled caboose after the first train jumped the track, and box cars are still tumbling in all directions:

Didn’t we just hear the ladies of The View explain that a word is a word, and it didn’t matter which gender was on the delivering or receiving end of “slut”? Is anyone calling for Kennedy to apologize for using the same uncivil language that has Rush Limbaugh in hot water? In fact, Kennedy’s verbiage is distinguishable: it is directed at a Senator, not a law student; calling a man, especially a politician, a prostitute is not as provocative as using that term to describe a woman, no matter what Whoopi says; Kennedy is clearly using the term metaphorically (so was Limbaugh, but it was too close for comfort, since the topic was sex); and, as one conservative wag said, call girls are classier than sluts. All true, and yet the willingness of Kennedy to use similar terms of denigration in public while the Right is pointing to Bill Maher and shouting hypocrisy indicates one of two things, and maybe both: 1) Kennedy is so confident that a double standard is in play that he feels completely comfortable in rubbing everyone’s face in it, or 2) this is just further proof of the generational dilution of talent, intelligence and skill in the Kennedy clan. Yes, I think “both” is fair. END_OF_DOCUMENT_TOKEN_TO_BE_REPLACED

Appearing on PBS’s “Inside Washington,” this week, veteran Democratic media cheerleader Mark Shields reached the conclusion that other Beltway pundits on the Left and the Right had reached before him: Democrat  accusations that the U.S. Chamber of Commerce is pumping foreign contributions into domestic campaign ads, in violation of Federal law, are baseless, and worse.  “It was absolutely fallacious on their part,” said Shields. “And they made it up, the White House did.”

President Obama, in his campaign appearances, has continued to suggest that this illegal tactic is occurring. The facts the accusation is based on was revealed by White House advisor David Axelrod when he repeated the accusation to an incredulous Bob Shieffer on last Sunday’s “Face the Nation” on CBS. Shieffer asked Axelrod if he had any evidence this was true, and Axelrod’s replay was,”Well, do you have any evidence that it’s not, Bob?” He then called upon the Chamber to prove a completely unsubstantiated claim wrong. This is, of course, a small bore version of Adolf Hitler’s unethical “Big Lie” tactic. Hmmmm…where else have I heard this approach used recently? Oh, I remember: “If Barack Obama really is a U.S. citizen, why doesn’t he prove it?” One would think the White House and President Obama would find this tactic beneath them.

The sad fact is that in the past few weeks, almost nothing has been beneath the President’s dignity. END_OF_DOCUMENT_TOKEN_TO_BE_REPLACED

From the imagination of conservative radio talk show host Sean Hannity, a wonderful suggestion of an ethical gesture missed: President Obama should have paid a visit to arch-critic and conservative icon Rush Limbaugh while Limbaugh was recovering from chest pains at a Hawaiian hospital. END_OF_DOCUMENT_TOKEN_TO_BE_REPLACED