I swear I am  trying to post on interesting ethics issues that have nothing to do with Hillary, Donald, either party or  their hot-button issues. My issue scout Fred and others have sent me scores of topics that are waiting on the runway. Then things like this happen.

To catch you up: After Wikileaks released embarrassing e-mails, hacked from the DNC, showing collusion by the supposedly neutral arm of the Democratic Party to ensure the nomination for Hillary Clinton, Clinton campaign manager Robbie Mook told  ABC’s “This Week,” “It’s troubling that some experts are now telling us that this was done by the Russians for the purpose of helping Donald Trump.”

Then Trump said at a news conference in Florida, “I will tell you this, Russia: If you’re listening, I hope you’re able to find the 30,000 emails that are missing,” the Republican nominee “I think you will probably be rewarded mightily by our press.”

Immediately Democrats, partisan lawyers, left-wing pundits and Trump-haters flipped out. Carl Bernstein, the far left half of Woodward and Bernstein, said Trump’s comments were “disqualifying.” Others wrote that his comments were “treason” or “virtual treason.” Clinton senior policy advisor Jake Sullivan said, “This has to be the first time that a major presidential candidate has actively encouraged a foreign power to conduct espionage against his political opponent.”

Trump, predictably, said that he was being sarcastic.

1. I trust that my disgust for Donald Trump, his values, his character and his candidacy have been clearly and thoroughly explained here, as they will continue to be. Nonetheless, basic ethics requires that he be treated fairly by the news media, and I will continue to point out the media’s bias against him, Republicans, and anyone standing in Hillary Clinton’s way as she attempts to corrupt the government and the culture by infecting both with her grubby ambition and dishonesty. This is one more episode of journalism bias in what will be a long, long trail leading right to election day.

2. The Democratic Party’s spin on the e-mail scandal is self-evidently desperate and misleading, not that this appears to discourage Clinton-supporters in the social media from adopting it. The central issue is what the hacked e-mails show, and what the DNC and the Clinton campaign did to rig the nomination. Mook’s deflection, which a fair and competent host would have immediately rejected (but George Stephanopoulos is a loyal former Clinton staffer and confidante with a conflict of interest), was a miserable, dishonest tactic. Naturally, it was quickly adopted by most of the party and its partisan journalist supporters. Sad, weak, Martin O’Malley  chimed in, END_OF_DOCUMENT_TOKEN_TO_BE_REPLACED

In a Sunday Times op-ed called Lord of the Lies, Timothy Egan argues that Donald Trump, and apparently only Donald Trump, should be fact-checked live in any Presidential debates. Egan is adopting the current fad among journalists, which is the argument that Trump is so bad, the media should apply a double standard, making sure his misrepresentations are immediately debunked, while presumably allowing Hillary to continue to issue whoppers every time she talks about Benghazi, her State e-mails, the Clinton Foundation, her record as a champion for victims of sexual assault, etc.

I already pointed out how unethical it was for CNN to employ an  on-screen fact-check of a Trump speech ( “Trump: I never said Japan should have nukes (he did).” ) especially since they will never do the same to Hillary (“Hillary:I never sent e-mails marked classified (She did…)”)  Egan thought CNN’s intrusion was just peachy, though, because the news media now believes their task isn’t to be fair to both candidates and treat them the same, but to employ any means necessary to defeat that one journalists have determined shouldn’t win.

A larger problem with Egan’s thesis—even more than his apparent belief that the notoriously biased PolitiFact is “non-partisan”)—is that he doesn’t know what a lie is. He adopts the flat-out wrong definition of lie used by most fact-checkers in fact: if they disagree with a statement or can show it is untrue, it’s a lie. That’s not what makes a statement a lie. For example, PolitiFact is demonstrably biased and Democratic-leaning, far more so than the Washington Post’s Factchecker or Fact Check.org. But I wouldn’t assume that Egan is lying when he says otherwise. Progressive journalists just assume PolitiFact is fair and non-partisan because they think they are fair and non-partisan. They are deluded, not lying. That’s an important distinction. END_OF_DOCUMENT_TOKEN_TO_BE_REPLACED 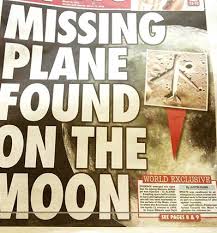 “Trump Telling The Truth” is about as believable…

When Andrew Breibart died, the conservative punditry world befouled it self with weepy odes to his bravery and dedication to right’s mission, whatever it is. In fact, he was a sloppy and unethical ideologically biased pseudo journalist, who made Fox News really look fair and balanced and MSNBC seem like the epitome of professionalism. Journalism with an agenda isn’t journalism, and Breitbart’s website never let nuances like facts get in the way of a good smear or a dubious accusation.

Earlier this week I read for the first time—since I avoid Breitbart like I avoid centipedes—that there were rumors that The Donald was sending favors the way of the website, and in return, it had grabbed the niche of pro-Trump media mouthpiece, thus setting itself up to run the Ministry of Truth when he gains power and begins rounding up the Unsuitables. THere’s no proof of this, but it could explain articles like this one today, titled Trump 100% Vindicated: CBS Reports ‘Swarm’ On Rooftops Celebrating 9/11.

To cut to the chase, nothing in the article vindicates  or supports Trump in any way, and certainly not “100%.” That’s pure linkbait, though the disgraceful story holds on to the like like grim death, tossing excuses, equivocations, deceits and logical fallacies at it as if this junk can turn lead into gold. END_OF_DOCUMENT_TOKEN_TO_BE_REPLACED