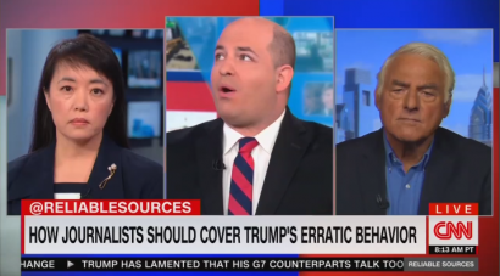 CNN’s laughable “media critic,” Brian Stelter, who has distinguished himself and embarrassed his field—supposedly media ethics—by devolving into a mere shill for CNN and a dependable scourge of Fox News, may have hit a new low yesterday. I say “may” because  its hard to make qualitative distinctions in the murk at the bottom of the barrel.

Stelter brought on the former chairman of the Psychiatry Department at Duke University, Dr. Alan Frances, apparently because he has a raging, Level 5 case of Trump Derangement. This is sufficient qualification  for a national news media platform now. No enlightenment necessary, no reasoned analysis, just good, old fashioned, bat-shit Trump hate, with plenty of spittle and that wonderful “Is he going run off on all fours biting people?” suspense. On Stelter’s show with the doctor was Bandy Lee, who defied her profession’s rule against diagnosing political figures from afar throughout the 2016 campaign, saying that she was  “obligated to break [the rules] in times of emergency,” thus evoking eleven rationalizations by my count. That’s right, Lee and Francis were the representatives of the psychiatric profession CNN’s “media ethics” authority decided would give a balanced assessment of the practice of psychoanalyzing the President.

Dr.  Frances pretended to criticize his professionally irresponsible colleagues like Lee for assisting in the resistance’s Plan E, trying to illegitimately apply the 25th Amendment allowing a disabled President to be removed from office.   Oh no, he said: doing this was just plain wrong:

“Well, I think ‘medicalizing’ politics has three very dire consequences. The first is that it stigmatizes the mentally ill. I’ve known thousands of patients, almost all of them are well-behaved, well-mannered good people. Trump is none of these. Lumping that is a terrible insult to the mentally ill and they have enough problems and stigma as it is. Second, calling Trump crazy hides the fact that we’re crazy for having elected him and even crazier for allowing his crazy policies to persist… Now, it’s absolutely impossible, you can bet the house that the Congress, that Pence, that the cabinet will never ever remove Trump on grounds of mental unfitness. That will never happen. Discussing the issue in psychological name-calling terms distracts us from getting out to vote. The important thing is to get Trump out of office.”

Is that your expert opinion, doctor? Simply wanting to defeat the President is all it takes to get on CNN, apparently.

Ah, but it was within those ellipses that the doctor really came through, saying, END_OF_DOCUMENT_TOKEN_TO_BE_REPLACED