Jim Acosta is the epitome of a CNN anti-Trump hack, one of many. Jake Tapper, once a reliable oasis of integrity in the expanding desert of corrupt and biased mainstream media reporting, has understandably rotted on the CNN vine since joining the network, but now and then Good Jake surfaces.

In a White House briefing last week, press secretary Kayleigh McEnany discussed President Trump’s call for children to go back to school in the fall.

“The science should not stand in the way of this, but as Dr. Scott Atlas said — I thought this was a good quote, ‘Of course, we can do it. Everyone else in the Western world, our peer nations are doing it. We are the outlier here.’ The science is very clear on this. For example, you look at the JAMA pediatric study of 46 pediatric hospitals in North America that said the risk of critical illness from COVID is far less for children than the seasonal flu. The science is on our side here. We encourage localities and states to just simply follow the science. Open our schools.”

Acosta, who was there, deliberately redacted her words  to make it appear that McEnany was dismissing the relevance of science, thus confirming a persistent mainstream media narrative about the Administration being science-deniers.

I’ve been tempted to see how many of my Trump Deranged, biased media-enabling Facebook friends have passed on the lie to the acclaim of many “likes,” but I have enough aggravation.

Whether Acosta was Liar Zero or whether he got the idea from another reporter doesn’t matter. He circulated  deliberate fake news, and could have no innocent justification.  Later, after being called out on social media, Acosta added the missing context, but the fact is, he was caught.

He should be suspended at the very least for this, and probably fired. A news source with any journalism integrity at all would immediately discipline him. Of course CNN has said nothing and done nothing.

Jake Tapper did, though: END_OF_DOCUMENT_TOKEN_TO_BE_REPLACED

Ethics Alarms reader and frequent commenter Michael J. Ejercito reports that he tried to post this morning’s warm-up on the U.S. politics Reddit and got the above response.

What in this post was not “safe, civil, or true to their purpose”?

END_OF_DOCUMENT_TOKEN_TO_BE_REPLACED

It is clear, if it wasn’t already, that everything hinges on whether the American public is as stupid and inattentive as those seeking to manipulate it think it is.

1. Mobs? What mobs? I just listed to CNN’s health expert, Dr. Gupta, list the reasons there has been a surge in Wuhan virus cases. Notably absent from his list were the mass, no social distancing demonstrations/protests/riots that began two weeks ago as a prominent part of the George Floyd Ethics Train Wreck. These, as you may recall, were largely supported by the health experts (though I don’t have a record of Gupta being among them) as they apparently decided that Black Lives Matter matters more than all the black lives that would be put in danger by ignoring the safety measures we shut down the country to install.

I also have yet to read a single news story about the new cases of the virus that highlights the completely predictable effect of the mobs, which are still roaming, as a factor in the so-called “surge,” though I can’t check everything.

Is the news media really certain that if they don’t report this connection, it will never occur to most of the public? I’m already reading accusations that opening up the states is “racist” because of the evidence that African-Americans have contracted the virus and died from it at a higher rate than the rest of the public. By that logic, encouraging the mobs of George Floyd protesters was also racist.

To re-phrase Wilford Brimley from his great scene in “Absence of Malice”: “American Public, are you that dumb?” So far, it seems so. END_OF_DOCUMENT_TOKEN_TO_BE_REPLACED 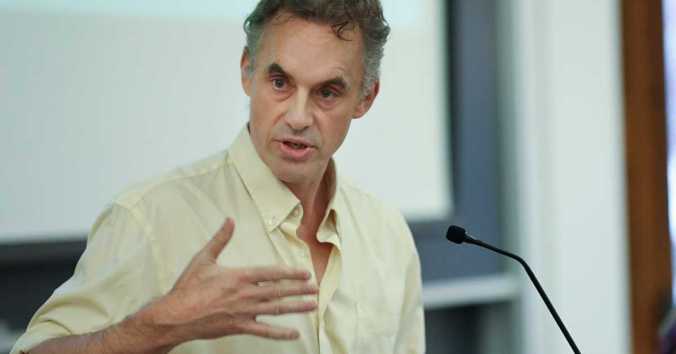 “Because in order to be able to think, you have to risk being offensive. I mean, look at the conversation we’re having right now. You’re certainly willing to risk offending me in the pursuit of truth. Why should you have the right to do that? It’s been rather uncomfortable. […] You’re doing what you should do, which is digging a bit to see what the hell is going on. And that is what you should do. But you’re exercising your freedom of speech to certainly risk offending me, and that’s fine. More power to you, as far as I’m concerned.”

—–University of Toronto Clinical Psychologist Dr. Jordan B. Peterson responding to a British Journalist who asked him in an interview, “Why should your right to freedom of speech trump a trans person’s right not to be offended?

When the interviewer, Cathy Newman, was unable to muster a response, Peterson said,  “Ha! Gotcha.” To her credit, Newman replied,

I’ll give her credit for having sufficient integrity to admit that she hadn’t thought the issue through, but that’s all I’ll give her credit for. What Peterson said should be obvious to any half-conscious and minimally educated individual. The episode is less about great truths dawning as the result of a sage’s perceptive words than it is about the relentless shallowness of journalists, making their presumptuous efforts to mold the thought and opinions of anyone else not just ridiculous, but infuriating.

Can you sense that I’m losing patience with journalists today? Perhaps it was hearing this, from non-doctor, non-smart person, fake-news purveyor for anti-Trump shill CNN Alisyn Camerota yesterday:

…leading to this graphic… 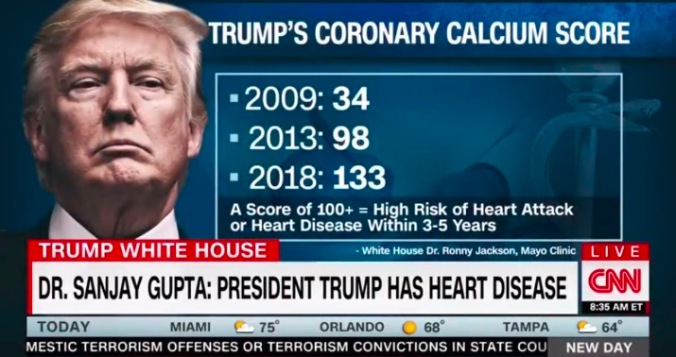 But the President’s physician. asked directly by Dr. Sanjay Gupta, CNN’s medical authority, said he did not:

Never mind. A CNN doctor who has never examined the President feels empowered to contradict the doctor who has, and who is responsible for his health. With any normal patient, Gupta’s conduct would be a breach of medical ethics, interfering with the doctor patient relationship. In this case, since the news media can get away with anything, it’s just one more example of arrogant, unethical journalism, manufacturing fake news.

Or perhaps of wishful thinking.

UPDATE: Moments after I posted this, CNN sent me this graphic with Dr. Gupta’s smiling face: 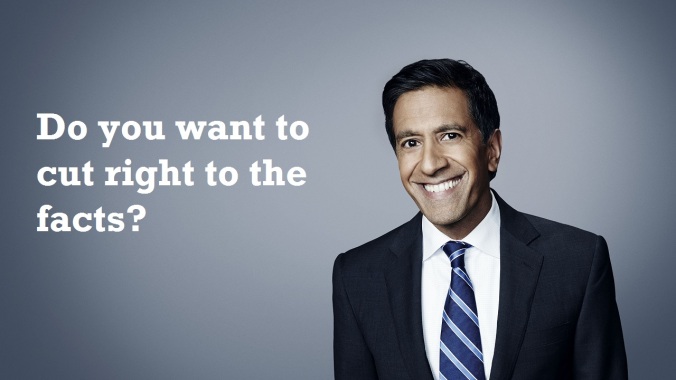 Yeah, I’d like to cut right to the facts, but on CNN, the snark, bias, stupidity and opinion make the facts all but impossible to detect. Talk about irony! What are ‘”facts” to you, Doctor? Indeed, what are “facts” to your whole network?

Are TV doctors entertainers, journalists or doctors? In a way the question doesn’t matter: if they are doctors, then they are obligated to follow medical ethics and the standards of their profession at all times, no matter what else they may be taking compensation for. This is why “Dr. Oz” is ducking the issue when he tries to avoid accountability for pushing quack remedies on his TV show (if it ducks like a quack…) by arguing that he isn’t practicing medicine, but engaging in entertainment. He’s still a doctor, every second of his life, once he takes that oath.

CNN’s Dr. Sanjay Gupta has largely steered clear of ethical issues in his tenure as the network’s medical expert. Not entirely, however; for example, in 2009, he was prominently mentioned as a possible Surgeon General, and was in discussions with the White House while continuing his reporting on the air, raising real and potential conflict of interest concerns. The most recent controversy is more serious. END_OF_DOCUMENT_TOKEN_TO_BE_REPLACED