Thus went the jaw-on-the-floor stupid tweet of Zack Beauchamp, a senior report at Vox. I had written a post about the ridiculous “gunsplaining” article in the Washington Post, and foolishly assumed that even anti-gun fanatics would be embarrassed to endorse the view expressed there that those arguing for material changes in public policy should be required to understand the object of that policy. Then came Zack’s tweet.

Admittedly, and to be fair, Twitter makes people stupid. We have documented the sad Twitter-feuled decline of Harvard Law School icon Larry Tribe, and new victims of Twitter brain-suck suface every day.  Bill Kristol once had a rather impressive brain, for example; look what he tweeted last week: 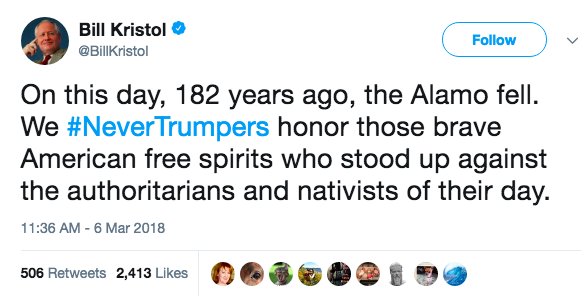 Wow. What a terrible, and ahistorical, analogy.  The Texans at the Alamo were fighting in a war to secede from Mexico. Santa Anna was an authoritarian all right, but to Texans he was being authoritarian in the same way Lincoln was when he used forcet to keep the South from leaving. Mexico was hardly “nativist”: it invited Americans to settle the territory, and their arrival was completely legal. Indeed, Texas is a great example of what can happen when a country doesn’t control immigration at all.  Twitter makes you stupid, and bias makes you even more stupid. Add anti-Trump bias to Twitter and you get Bill Kristol sounding like Maxine Waters.

The fact that Vox employs a senior reporter whose critical thinking skills are so poor and whose judgment is so wretched that he happily displays them on social media is instructive regarding the influence new media commentators like Vox wield. Thus I was grateful for this Comment of the Day, by Michael West, on the post, The Desperate “Gunsplaining” Dodge’: END_OF_DOCUMENT_TOKEN_TO_BE_REPLACED

The latest tactic of the anti-gun Left is especially bizarre, but it nicely exposes the desperation and the essential dishonesty of the Parkland shooting extension of the Sandy Hook Ethics Train Wreck, which started its long journey of ethics carnage when gun control advocates decided to jettison fair and civil debate as well as any mooring to reality in exchange for demonizing, emotionalism, and hysteria.

In an op-ed in the Washington Post, gun-opponent Adam Weinstein accused pro-Second Amendment defenders and of bullying and deflection by what he called “gunsplaining.” The term was originally coined by Cosmopolitan four days before the massacre at Marjory Stoneman Douglas High School, though Cosmo’s version was that “gunsplaining” is just a sub-set of “mansplaining,” where men, the theory goes, inherently condescend to women by pointing out when they are wrong about anything. Weinstien’s version was a different, and even more foolish, a rationalization for ignorance:

“While debating the merits of various gun control proposals, Second Amendment enthusiasts often diminish, or outright dismiss their views if they use imprecise firearms terminology. Perhaps someone tweets about “assault-style” weapons, only to be told that there’s no such thing. Maybe they’re reprimanded that an AR-15 is neither an assault rifle nor “high-powered.” Or they say something about “machine guns” when they really mean semiautomatic rifles. Or they get sucked into an hours-long Facebook exchange over the difference between the terms clip and magazine.”

The Horror. In fact, what Weinstein is complaining about is that mean old gun-ownership supporters point out when a knee-jerk, emotion-filled gun control advocate obviously doesn’t know what he (or she!!!,Cosmo) doesn’t know what the hell they are talking about. Note the Post’s Eric Wemple, in the tweet above, calls this a “bad faith” tactic. It’s funny: pointing out that an opponent is full of malarkey has always been  a valid debate tactic before, and for good reason. It means that that an advocate’s position is based on ignorance and laziness rather than sound research and facts. Why is this suddenly  bad faith. “bullying” and below-the-belt tactics now?

The reason is that the anti-gun Left has bet all its chips on the power of children claiming moral authority  to finally lead the anti-gun army to victory over the Second Amendment, and those children wield passion and anger but little else. Despite proclaiming themselves as “experts” on gun policy, as David Hogg recently did on Bill Maher’s “Real Time,” their expertise extends only as far as “Guns Bad!” Thus the “gunsplaining” dodge: who ever said you actually need to know what you’re talking about to be a respectable advocate? END_OF_DOCUMENT_TOKEN_TO_BE_REPLACED