The Bill, if it became law, would make it a crime to insult a police officer if the words or gestures provoked a violent response. It would be class B misdemeanor, punishable up to 90 days in prison, when someone “accosts, insults, taunts, or challenges a law enforcement officer with offensive or derisive words, or by gestures or other physical contact, that would have a direct tendency to provoke a violent response from the perspective of a reasonable and prudent person.”

This potential law (actually, it isn’t even potential because the thing would be unconstitutional and a First Amendment breach the second it was passed and signed) is one of the most embarrassing pieces of legislative garbage I have seen in a very long time. It essentially says that if a citizen is so darn mean to a police officer by saying nasty things or making scary faces, and the officer is so unprofessional, incompetent and badly trained that he or she commits violent battery, the victim of the cop’s attack can be locked up! Brilliant!

Let’s look at the relevant section of the Bill of Rights, shall we? You know, that old document they apparently don’t teach in Kentucky schools and that applies to the States through the 14th Amendment? The one progressives don’t like?

“Congress shall make no law … abridging the freedom of speech…“

This isn’t hard, or shouldn’t be, even for Kentuckians. (My father grew up in Kentucky.) When a law says “you can be imprisoned for saying things that a police officer finds offensive” that’s abridging free speech. What ignoramus composed this monstrosity?

He is State Senator Danny Carroll, (R-Benton), who says the bill is in response to the riots in Louisville last summer (There is another Breonna Taylor demonstration going on in Louisville right now) and on Capitol Hill in D.C.

END_OF_DOCUMENT_TOKEN_TO_BE_REPLACED 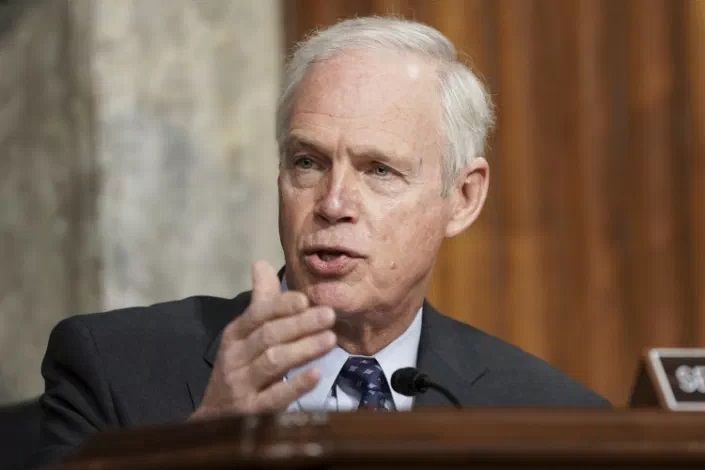 Here’s a rule of thumb: if you are a national politician and are moved to say, “This is going to get me in trouble,” don’t say “this” unless it is so brilliant that your message will eventually enshrine you in the Yale Book of Quotations…and maybe not even then.

“I knew those were people who love this country, that truly respect law enforcement, would never do anything to break the law, so I wasn’t concerned.Now, had the tables been turned, and Joe — this is going to get me in trouble — had the tables been turned and President Trump won the election and tens of thousands of Black Lives Matter and antifa, I might have been a little concerned.”

Now people are calling Johnson a racist, because he didn’t fear a white mob, but would have feared a black one.

Wow, what a stupid thing to say:

END_OF_DOCUMENT_TOKEN_TO_BE_REPLACED

…because Turley did such a superb job showing how ridiculous Swalwell’s lawsuit is. I couldn’t possibly compete.

I saw the note about Swalwell filing a a 64-page complaint against Donald Trump ( and Donald Jr., Rudy Giuliani, and Rep. Mo Brooks) alleging nine counts in tort ranging from negligent emotional distress (suffered by Swalwell) to negligence, in an “incitement to riot.” That news sparked three thoughts: 1) “What an idiot!” 2) “Who was the hack lawyer who agreed to file such a suit?,” and finally, 3) “This will be a fun post to write!” And it was, except that while I was formatting, editing and arranging tags, commenter Steve Witherspoon dropped me an email that said in part, “Did you read Turley’s blog post about Eric Swalwell posted a couple of hours ago? WOW!!!”

The take-no-prisoners defenestration of Swalwell is unusually merciless for Turley, who begins,

“French philosopher Voltaire said he had only one prayer in life — “O Lord, make my enemies ridiculous” — and that it was uniformly granted by God. The answer to Donald Trump’s prayers may be Rep. Eric Swalwell (D-Calif.)”

Do read the post. And as you do, remember that the idiot Turley is writing about was hand-picked by Nancy Pelosi to be one of the House Managers in the second Trump impeachment trial. The University of Maryland School of Law must be measuring the heads of its board, administrators, alumni and faculty for paper bags to wear, because that school gave Swalwell a law degree.

This guy actually sent his comment to my email account. Not to keep you in suspense, he will not be approved for future participation.

Traffic here may be falling, but I am getting more hate mail than ever—from self-professed conservatives, for, you know, my being such a knee-jerk progressive.

Here is No Name Yet’s Comment of the Day on the blog in general. Enjoy:

If you are so concerned with bigotry and racism and whatever virtue signaling fake shit.  I don’t understand why you associate with the people who push racism. I’ve never met a bigger racist in my life than a progressive. People who are constantly putting people in categories… categories according to race and sex. The ultimate racist. The nerve of you 2 point fingers. I’m sure you’re probably some middle-aged pseudo- intellectual weakling. The kind of man that wouldn’t last five minutes if society broke down or if the police actually were defunded. You’re probably one of the people that was making fun of me when I was speaking out against real racism back in the 90s when it was more of a problem, although it was much a bigger problem before that. Bigotry, really? your f****** swimming in it. Group thinker! Go piss yourself.

END_OF_DOCUMENT_TOKEN_TO_BE_REPLACED

Ah, the Stupid is strong with this one! Rep. Marjorie Taylor Greene invited the press to a town hall event last night in which she planned on answering questions about her support of various wacko conspiracy theories, as well as her silly filing of a bill of impeachment against President Biden. Despite inviting the press, Greene’s instructions were that they couldn’t ask any questions. Yeah, that always works.

A reporter and videographer from a local Georgia station tried to question the Congresswoman, and Greene told them that she was there to speak to her constituents, and not to deal with the news media. Then a Whitfield County sheriff’s deputy escorted the journalists out of the town hall and threatened to arrest and charge the crew with criminal trespassing if they refused to leave. Later, a spokesperson for Greene’s office explained that the crew was removed because the town hall event was “not a press conference.”

END_OF_DOCUMENT_TOKEN_TO_BE_REPLACED

This embarrassing episode is res ipsa loquitur, but I’m going to rant about it a bit anyway while I duct tape my head back together, beginning with, “What an IDIOT!”

END_OF_DOCUMENT_TOKEN_TO_BE_REPLACED

Unrelated to any kind of stupid: Yesterday was the anniversary of the demise of my old friend, Glenn White, in 2013. I never got to attend a funeral or service for Glenn; his family didn’t see fit to let me know he had died, despite our association of thirty years. This is what I always will remember about Glenn: He knew what it meant to be a friend. We knew each other through theater, though he was a Fairfax City, Virginia politician. Glenn used to say, “If you need me, Jack, you just have to ask. I’ll be there.” And he always was. When he was in his late 70s, I needed someone to play an old man in one of my theater company’s shows. Glenn used to call himself The American Century Theater’s resident geezer, but he had moved to the Virginia countryside, and it was more than a three hour commute, round trip, to rehearsals and performances. My plight was barely out of my mouth when he said, “Sure, you can count on me.”

How many people do you get to meet in your life who are like that?

1. I really hate this...I spent precious time, as I was trying to get a post in before the clock struck 12 last night, writing about this story, published yesterday and passed along credulously by a U.S.news aggregator, only to find that the events described happened in 2019. I have encountered this before: some website is light on material, so it uses an old story for click-bait without stating the time frame until the very end.

2. Today’s inexcusable, biased, partisan and unethical headline from the New York Times front page: “Trump Targeting Michigan In Ploy To Subvert Election.” Clearly, the Times isn’t even trying any more. The use of “ploy” and “subvert” is not only editorializing, it’s irresponsible editorializing. There were certainly a lot of strange things going on in the Michigan voting and vote-counting;the state should be targeted. (There are strange things going on in Michigan generally.) If the Michigan vote was corrupted, discovering how and how much doesn’t “subvert” anything. If it turns out that Michigan actually was won by Trump—admittedly a remote possibility—then that discovery prevents the election from being subverted.

The Times’ job is to explain what the Trump campaign’s challenges to the election are in factual terms, not to speculate on diabolical motives, to trigger violence and subvert democracy.

3. What does this display remind you of?

END_OF_DOCUMENT_TOKEN_TO_BE_REPLACED

One of the more ridiculous moments in the hearings to vet Judge Barrett was the contrived indignation expressed by Senator Hirono and Senator Cory Booker when the nominee used the term “sexual preference.” The Democrats had nothing valid to complain about regarding the judge—attacking her religion had proven unpopular and ugly in her previous confirmation hearings—so this was the best they could do: political correctness and dubious language taboos.

It wasn’t just them, of course: Patty Murray, the third-ranking Democrat in the Senate, tweeted: “Judge Barrett using this phrase is shameful and offensive—and it tells us exactly what we need to know about how she views the LGBTQIA+ community.” Yes, that’s certainly fair: the unplanned and innocent use of term that has been unofficially designated as “offensive” by activists tells Democrats “all they need to know.” This was the signature significance moment that saw Webster’s dictionary prove beyond a shadow of a doubt its unethical bias and lack of integrity when the company reacted to the Hirono-Booker vapours by changing the online definition of “sexual preference” to match the new GoodSpeak.

Honestly, why aren’t people embarrassed to be supporting a party and its allies that behave like this? But I digress.

As pointed out in the related Ethics Alarms article, inconveniently for Hirono, two of her Democratic colleagues on the Judiciary Committee and her party’s Presidential nominee, Joe Biden, had also recently used that phrase that “tells us exactly what we need to know” about them, which is—what exactly? That they missed a memo from the Language Police High Command? I’m confused.

So was National Review writer John McCormack, who relates his exchange with the Hawaiian Senator on the topic:

END_OF_DOCUMENT_TOKEN_TO_BE_REPLACED

I promised not to pile on to ridicule the CNN legal analyst who for some reason only known by him and Priapus decided to—you know—while in the middle of a well-attended Zoom meeting, on camera. This presumably rendered the lawyer a permanent laughingstock whose career as a respected—well, not by me, but by progressive ideologues—commentator on law-related current events is probably kaput. It certainly should be kaput, but many have marveled that he has not been fired, just suspended, and some even are betting that after a “cooling off period,” he may be welcomed on CNN again.

Progressives and pundits are working so hard to spin his outrageous conduct that you would think he’s Bill Clinton or Joe Biden, worthy of the King’s Pass because of some unique value to the public, or at least to left-biased news coverage. He’s not; if there is one kind of expert that is as fungible as jellybeans, it’s legal pundits like…the guy whose name I promised not to mention again. But never mind that: any high placed employee of a company requiring public trust would be fired after an incident like this….including, I presume, a university professor.