Dana Stangel-Plowe, a teacher at the Dwight-Englewood School in Bergen County, New Jersey, resigned from the private school in a damning resignation letter subsequently published by the Foundation Against Intolerance & Racism. FAIR is an organization created to oppose the teaching of Critical Race Theory teachings in schools. Among her other accusations in the letter, Stangel-Plowe wrote that the head of Dwight-Englewood, Rodney De Jarnett, told the faculty that he would fire everyone if he could to replace them with non-white teachers. She also revealed that $52,000 a-year school segregated its teachers by skin color and asked students to segregate themselves “within the oppressor or oppressed group.’

Upon reading the letter, John McWhorter, an associate professor of English and comparative literature at Columbia University, called the news media’s attention to her protest by tweeting his support, writing,

“All hail Dana Stangel-Plowe, who has resigned from the Dwight-Englewood School, which teaches students “antiracism” that sees life as nothing but abuse of power, and teaches that cringing, hostile group identity against oppression is the essence of a self,” and added, 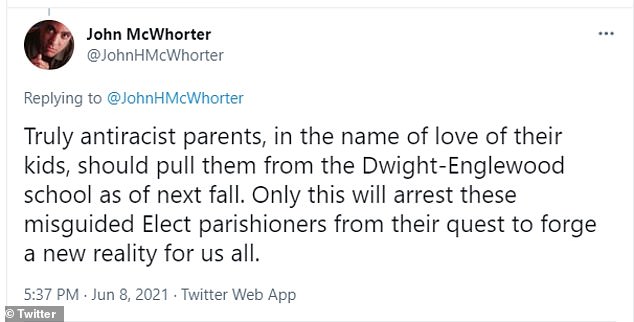 The entire resignation letter is below.

END_OF_DOCUMENT_TOKEN_TO_BE_REPLACED

The news is ugly, but the snow is beautiful.

1. Who’s really to blame for the shutdown? A weak and feckless GOP Speaker was the culprit, the wishy-washy, onflicted and above-it-all Paul Ryan.He had a Republican majority in the House, and lacked the leadership, resolve and political skills to take care of the border issue when the opportunity was there. Is there any doubt that Nancy Pelosi, Tip O’Neil or Newt Gingrich couldn’t have gotten the job done?

We were constantly told that Ryan was a reluctant Speaker. Reluctant leaders are almost never effective leaders; leaders want to lead and like to lead, and it is unethical to assume the role of a leader when you don’t have the spine or the skills to do the job.

2. Stop making Ann Althouse defend Donald Trump! Ann, with assists from Seth Barrett Tilman and Glenn Reynolds,  does a nice job debunking writer John McWhorter’s cheap shot criticism of the President in his  “Trump’s Typos Reveal His Lack of Fitness for the Presidency/They suggest not just inadequate manners or polish, but inadequate thought.”

“The president of the United States has many faults, but let’s not ignore this one: He cannot write sentences. If a tree falls in a forrest and no one is there to hear it … wait: Pretty much all of you noticed that mistake, right? Yet Wednesday morning, the president did not; he released a tweet referring to ‘forrest fires’ twice, as if these fires were set by Mr. Gump. Trump’s serial misuse of public language is one of many shortcomings that betray his lack of fitness for the presidency. Trump’s writing suggests not just inadequate manners or polish—not all of us need be dainty—but inadequate thought. Nearly every time he puts thumb to keypad, he exposes that he has never progressed beyond the mentality of the precollegiate, trash-talking teen.”