1 The FBI is now complaining that it’s too difficult to break into smartphones, since the Texas maniac, Devin Kelley, had one that has so far resisted cracking. By all means, let’s make sure we have no privacy from government intrusions into our lives and relationships. I’m sure—I really am sure—that the “think of the children!” mob and the “if it saves only one life!” brigade will happily surrender the right to privacy, which is, per the Supreme Court, is also in the Bill of Rights, just like the rights of free speech and the right to bear arms.

The solution is right in front of the FBI anyway.  Just take Kelley ‘s body on a plane trip to Bali, manipulate his dead thumb, and use it to unlock the phone.

2. I see little to choose from ethically between Facebook selling space for deceptive ads to the Russians and CNN selling time on their newscasts for a billionaire to make his personal, dishonest and ignorant demand that President Trump be impeached. I had heard and read about the ad, which is basically Maxine Waters’ warped version of the Constitution and the impeachment clause, with a little Richard Painter thrown in, but I assumed I would have to go online to see it. Nope, there it was this morning during a break on Headline News. Respectable news sources, not that CNN qualifies any more, have traditionally rejected factually misleading political ads from private interests, and a Constitutionally moronic rant from a rich guy with money to burn surely should qualify.

The rich guy is Tom Steyer, who apparently once was an intelligent human being even as you and I. His ad claims that “Donald Trump has brought us to the brink of nuclear war, obstructed justice, and taken money from foreign governments. We need to impeach this dangerous president.” Let’s see: the first is pure hysteria and an attempt to criminalize policy and international poker (I’d argue that the weak response to North Korea by the U.N. and previous administrations has been what has “brought us to the brink,” as well as, of course, the rogue country threatening nuclear attacks and firing missiles over Japan).

The second is a gonzo anti-Trump resistance theory that would be tossed out of any court, except maybe in Hawaii. The third is intentionally dishonest: this is the Emoluments Clause fantasy that holds the discredited theory a hotel owner has to be impeached if he doesn’t sell his hotels. Steyer’s ad also says that that Trump should be impeached for various tweets, half-baked opinions and comments. As one would expect from a  Democratic mega-donor, he apparently believes that speech qualifies as a high crime when it annoys progressives.

Naturally, again as one would expect, Steyer implies in his ad that Bill Clinton, who really did commit a crime as President and really did obstruct justice, was impeached by a Republican Congress for “far less.” This disqualifies him as a serious person.

3. Baseball fans know that Roy Halladay, a near-Hall of Fame pitcher with the Blue Jays and Phillies renowned for his durability until his arm fell off (metaphorically speaking), was killed this week when he crashed his single engine plane into the Gulf of Mexico. Observers say he was flying recklessly, and there is evidence that he wasn’t properly experienced to be operating the plane as he was. In Boston, radio sports jockey Michael Felger went on an extended rant excoriating the dead pitcher for being irresponsible, especially as a husband and father.  Here’s a sample: END_OF_DOCUMENT_TOKEN_TO_BE_REPLACED

When Miami Marlin pitching star Jose Fernandez died, along with two friends, in the night crash of a speedboat he owned, the city of Miami and Major League Baseball was thrown into a state of extended grief. Not only was the 24-year old pitcher the super-star of the Miami Marlins franchise, but, we were told, was a young man of extraordinary character as well. He had the brightest future imaginable. Fernandez was expected to earn between 300 and 500 million dollars during what was expected to be a Hall of Fame caliber career. His girlfriend was pregnant. He was already a role model and a celebrity.

After his death, the team mourned their fallen star with dignity and emotion. This season, the Marlins to honor plan his memory in various ways.

After nearly six-month investigation, The Florida Fish and Wildlife Conservation Commission’s report on the accident  concluded  that Jose Fernandez was driving the speed  boat when it crashed. killing the pitcher, Eduardo Rivero and Emilio Macias  in the early morning of Sept. 25, 2016. Fernandez’s blood alcohol level was .147 and there was “noted presence of cocaine,” according to the Miami-Dade Medical Examiner’s toxicology report.

The speed of the 32-foot vessel during the impact of the crash on the north side of a jetty was 65.7 miles per hour, far too fast for the conditions and the area. The report concludes:

“Fernandez operated V-1 with his normal faculties impaired, in a reckless manner, at an extreme high rate of speed, in the darkness of night, in an area with known navigational hazards such as rock jetties and channel markers.”

Is it ethical, responsible and right for the Miami Marlins, or anyone, to honor Jose Fernandez in light of these revelations?

END_OF_DOCUMENT_TOKEN_TO_BE_REPLACED 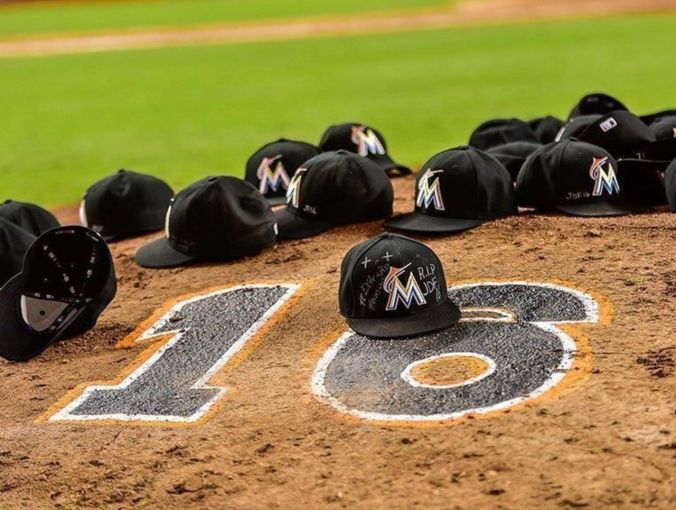 Miami Marlins pitcher Jose Fernandez, at 24 one of the rising stars in baseball and a remarkable, charismatic young man as well, died when his boat hit a jetty at high speeds in the early morning hours last Sunday. He had escaped to the U.S. from Cuba at 15 after failing twice and being imprisoned by the Castro regime as punishment. How good a pitcher was he? At this point in his career, as good as any pitcher in the history of the game. What might he have accomplished? The possibilities were limitless.

Two of his friends were also killed in the accident, and he left a pregnant girlfriend behind. Baseball stars have died tragically mid-career before—Roberto Clemente, Thurman Munson, Harry Agganis, Ken Hubbs, Lymon Bostock…Lou Gehrig, of course…but seldom has a death in the sport caused such an widespread outpouring of grief.